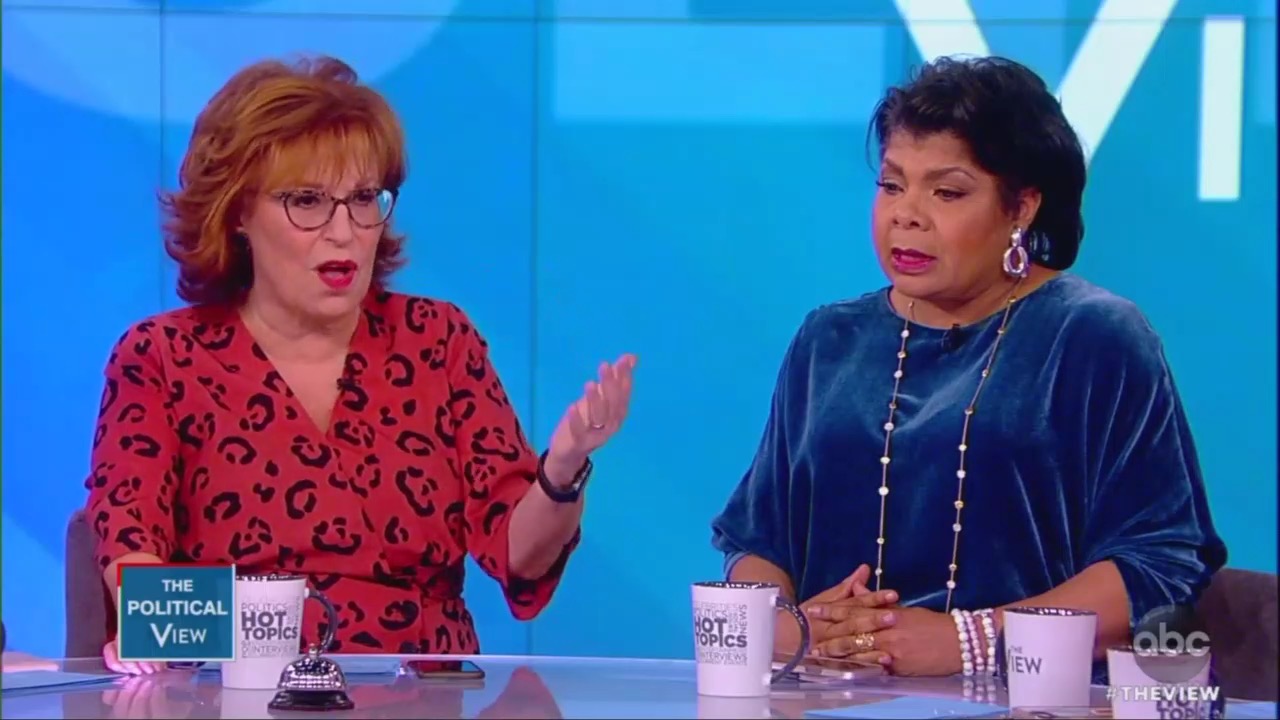 CNN contributor and American Urban Radio Network White House correspondent April Ryan appeared on Thursday’s The View, to join the hosts in complaining about President Trump’s treatment of the press, after Wednesday’s combative press conference. Co-host Joy Behar took the opportunity to bash Trump as a racist because he told Ryan to sit down during that presser, after she repeatedly tried to interrupt another reporter. The next day, the hosts continued the race-baiting.

Thursday, Behar asked Ryan what it was “about her” that made President Trump attack her. Ryan claimed she stood out because she was a black woman and from a smaller news network. Behar agreed.

“Yeah, he says nasty things about black women. He does,” she snarled as the audience applauded.

“He says that they're not qualified, that poor Stacey Abrams is not qualified. She's highly qualified!” Behar continued to rant.

Ryan complained that another black woman reporter was also treated unfairly, using the media’s favorite and most misused term, which was that she heard Trump used a “dog whistle:”

And beyond that what he said to Yamiche yesterday...Yamiche asked the question about nationalism, the president says I'm a nationalist. For many in this nation, not just black America, we hear a dog whistle because when you say nationalist, white nationalist which is white supremacist.

The next day on Friday’s show, Behar again picked up the racism topic without Ryan present. Pointing out President Trump had defended his behavior during that press conference, from a press gaggle Friday morning.

“Why is he picking on April Ryan? Jim Acosta, we know he's had it over here for him for a while, but April Ryan, what has she done to him?” Behar said, with disgust.

An irate Sunny Hostin jumped in to call Trump a “dictator” (how original):

He has a problem with anyone that will challenge him much like many dictators have that problem. He doesn't want you to believe your eyes. That’s what the problem is. I have to tell you-- for this president to call anyone unprofessional is really rich, really rich.

Hostin was on a roll, raging against Trump and how much she missed Obama:

But I think what is striking to me is that I feel complete disgust when I hear him speak because of the way he comports himself. I mean, what happened to elegance and class in the White House? I mean, it left, right, when Obama left. [ Applause ] I'm disgusted.

Behar jumped in to make the same point she made the day before, that Trump was racist against black women, with Hostin’s agreement.

I'll give a shoutout to Ronald Reagan, you know, or George W. Bush. They comported. In all the years I've been on this planet, all 40 years, I've never heard a president say to a news person, you're stupid, that's stupid.

“That’s what he said to Abby Phillips!” Hostin remarked.

“Let's look at her picture, what has she got in common with April Ryan?” Behar snarked.

“You mean the black woman on the left?” Hostin asked.

Friday co-host Ana Navarro added that he behaved the same way to another black reporter from PBS who asked about him being a “nationalist.”

Regardless of what the ladies of The View want to argue, there is no basis to this claim. Trump is an equal opportunity offender of any member of the press, as NewsBusters has demonstrated.