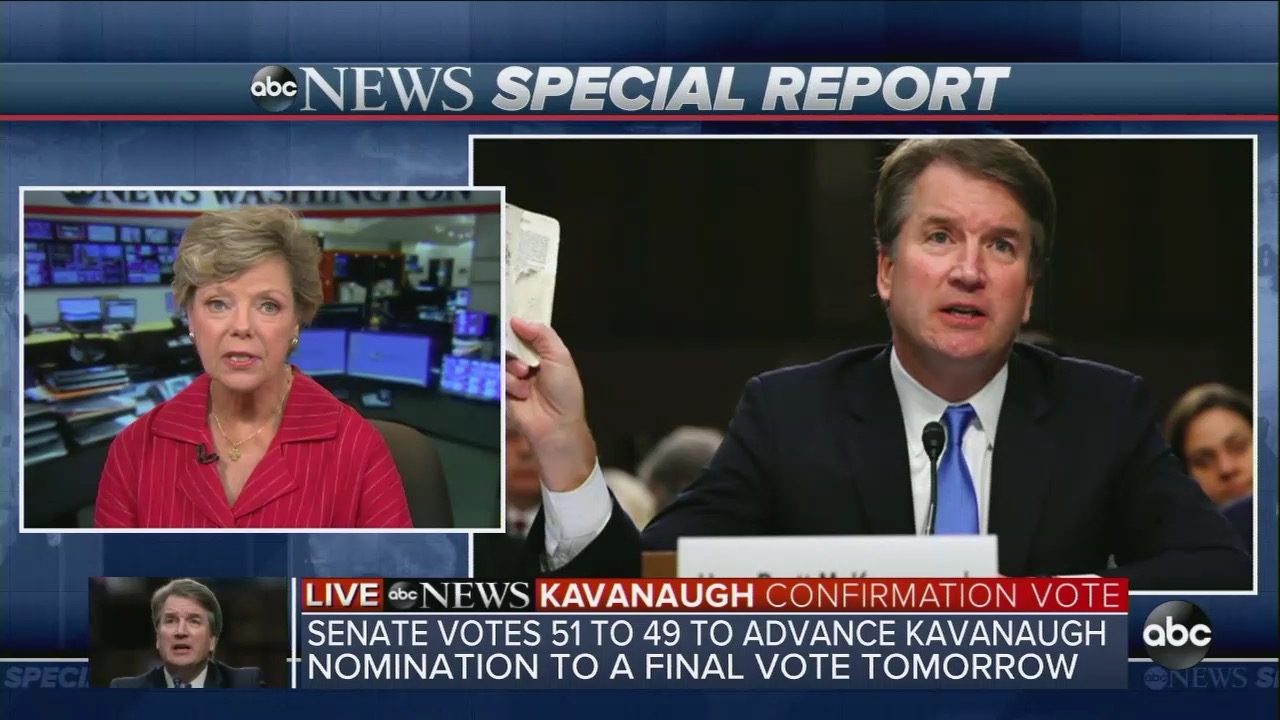 Breaking in with live coverage Friday, before and after the Senate vote to proceed onto the confirmation vote Saturday of Supreme Court nominee Brett Kavanaugh, ABC News’s Cokie Roberts, Jon Karl, David Muir, Mary Bruce and Terry Moran slammed the proceedings and the nominee as “very partisan” and an example of how sexual assault victims would be treated. Roberts saved her harshest rebuke for Kavanaugh, claiming that he was a symbol now of every woman who has been sexually assaulted.

World News anchor David Muir repeatedly hammered Kavanaugh’s opening statement before Congress as an unprecedented example of his partisanship.To correspondent Terry Moran he asked, “You’re a veteran of the court. Have you ever heard a nominee talk in such sharp, partisan terms? Again these were his prepared statements!”

Moran agreed with Muir’s assessment, saying that even Robert Bork and Clarence Thomas hadn’t been as partisan as Kavanaugh in their testimonies. Moran also followed the media’s suit in touting former liberal justice John Paul Stevens “extraordinary rebuke” of Kavanaugh, as if the liberal justice didn’t already have his own partisan bias against the conservative judge:

John Paul Stevens, longtime justice appointed by President Ford, a lifelong Republican. Voted liberal. But was seen on this court by all of the other members as very cordial, very correct in the way he approached justice's duties. ..For him to come out and say his performance at the hearing changed my mind and to say it publicly was a rebuke.

ABC analyst Cokie Roberts also blasted the proceedings and nominee as “very, very partisan,” but praised Lisa Murkowski who voted “no” to proceed with the vote, as brave:

“She's not as fearful of the Republican base as some of the others are,” she complimented, before going on to judge that Kavanaugh was now carrying the weight of every sexual assault victim in history:

DAVID MUIR: Cokie, the other question here is ultimately, how women around this country are seeing this vote here this morning, not just women, men, many men who have survived sexual assault as well...What do you suppose, how they're receiving where this is headed this morning?

COKIE ROBERTS: You’re going to see very stark and emotional reactions to this. But, you know, we've been seeing any way even before this very contentious hearing, a big gap between the men and women are reacting to Judge Kavanaugh. Of course, it's not as big as the partisan gap with Republicans supporting him and the Democrats but there is also a female gap particularly among independents. You're going to see a reaction to this. It's not fair for Judge Kavanaugh to bear the weight of all of the women who have been sexually harassed in history but that's part of what has been going on here. And again, his response to it exacerbated it.

But you know David even beyond what it means for women and the election and all of that, we have real problems now with two of our major institutions of government. You have a man who's very likely to join the Supreme Court, who despite his op-ed in the Wall Street Journal today saying he would be a fair and impartial judge, testified in a very, very partisan fashion before the Senate...