Networks Ignore Conservative Kansas Win, After Bashing Him Week Before 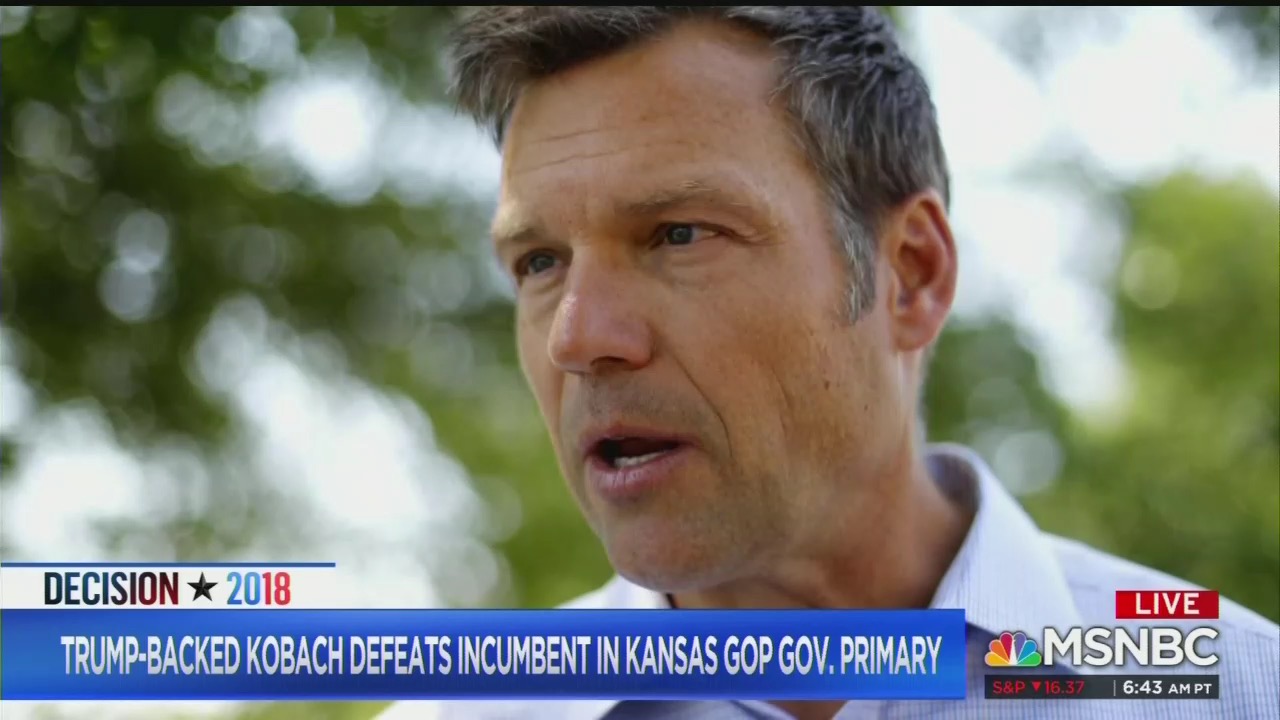 ABC, NBC and CBS ignored the Republican wins in last night’s primary election races, and didn’t update viewers on the finalized results from last Tuesday’s race in Kansas either. After spending last week hyping Democrat candidates and criticizing Trump picks as extremists who had no chance of winning, the networks had to eat their words this morning as Trump picks in several states won their primaries last night.

On top of that, the networks ignored Kansas Gov. Jeff Colyer finally conceding to Trump supporter Kris Kobach after he won the primary race last week, even after they had bashed Kobach leading up to the election.

Instead of pointing out the Kobach win or the Republican wins from last night’s races, all three morning shows instead hailed the “historic” Democrat wins, touting the first transgender candidate for governor in Vermont, and a Muslim woman candidate for Congress in Minnesota.

But last week they had a lot to say about the conservative Kobach, just not anything nice. ABC’s Jon Karl tried to fit as many negative adjectives as he could in one sentence, describing Kobach as “controversial candidate Kris Kobach, a hard-right, staunchly anti-immigration candidate.” Karl also insisted that Kobach wouldn’t win the election and that Republicans didn’t support him, suggesting it was because of his support for Trump. Over on CBS, Kobach was breathlessly labeled a "hard right" conservative with "incredibly conservative positions on immigration."

Leading up to the race, the networks claimed Trump endorsed candidates had no chance of winning and that the GOP was in "major trouble" with a sure "blue wave" to follow.

The video below shows how the networks reported on Kobach then:

But it wasn’t just Kobach’s win the networks tried to hide.

They also ignored the defeat of an anti-Trump GOP candidate in Minnesota, former Gov. Tim Pawlenty who had previously slammed the President as “unhinged.”

Even the Washington Post had to concede that Trump was the GOP’s “winner” these primaries, since candidates who supported him won their races, while those who opposed him, lost:

Trump: At least in Republican primary politics, Tuesday once again proved he’s the king. Republican politicians on the ballot Tuesday who dissed him in 2016 raced to undo that, and those who didn’t do it convincingly enough lost their primaries. In Minnesota’s competitive governor’s race, Republican voters nominated a relative outsider, Jeff Johnson, over a former governor, Tim Pawlenty, as Pawlenty struggled to get out from under the fact he called Trump “unhinged and unfit” during the campaign. (Johnson has his own past problems with Trump, which we’ll get to in the loser section.) “The Republican Party has shifted,” Pawlenty said as he lost. “It is the era of Trump, and I’m just not a Trump-like politician.”Trump’s riskiest endorsement yet, in last week’s GOP Kansas governor’s primary, paid off Tuesday, too. Kansas Gov. Jeff Colyer conceded an ultra-close race to Secretary of State Kris Kobach, who helped lead Trump’s voter fraud commission.