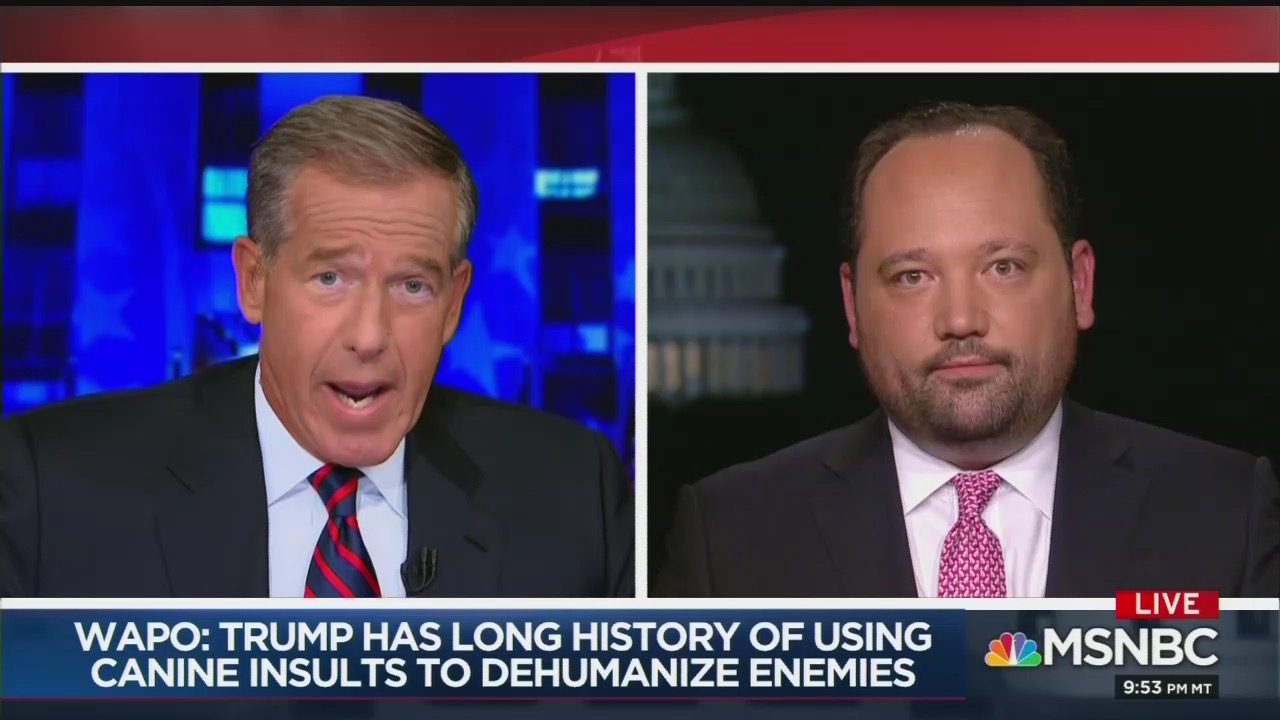 In a segment that sounded like it was written for The Onion, MSNBC host Brian Williams tried to bring something different to the media’s reporting on President Trump calling former aide Omarosa a “dog.” So he brought on Washington Post’s Philip Rucker on his show August 14, to speculate whether or not the President hated actual dogs. The two liberal journalists took Trump to task, using Google image search, to see if they could find any photographic evidence of the President with the animals. And just because it’s MSNBC, the pair ended the ridiculous segment by claiming Trump was behaving like a Nazi by using that term.

“The president has made something of an industry out of his use of nicknames...Think of the public officials who have put in decades of public service only to wear a nickname like little or low energy or crooked for the rest of their lives,” Williams began the segment on a pious note. Williams then played some video clips of Trump using the word “dog” to insult fellow politicians before introducing Rucker.

“Does this president really physically not like dogs?” he asked.

“That's right, Brian. He's actually the first president in more than 100 years who has not had a dog as a pet in the White House,” the reporter replied. He then gossiped that Trump only had one dog in the family when he lived with Ivana, and that dog didn’t like him. Yes, seriously this is what late-night MSNBC gossips about.

Making light of the topic that they themselves chose, Williams noted, “We launched an extensive web search that took us at least a few minutes and could only find one photo in all the land of Donald Trump with a dog.” Williams then wondered if this was all due to the fact that Trump was a “germaphobe.”

“Well, clearly he's not comfortable living with animals in the house,” Rucker stated, before going on to explain how dogs were revered in American culture.

Changing tone, Rucker stated this wasn’t something to joke about, because it was really a nod to Trump’s Nazi-like behavior. Because of course everything relates back to Hitler!

RUCKER: Yeah, I had I that's right, Brian. We've been making light a little bit of the President not wanting to have a dog in the house. It's deadly serious what he does with that word. Using it as an attack. He's dehumanizing his enemies. That’s the goal there. There's a long history actually of authoritarian leaders who have used these animalistic slurs as insults to dehumanize individuals or groups of people. During the Holocaust the Nazis would call Jews rats. I interviewed a philosophy professor who explained the history. It's become a very useful image for leads to use to try to stir up resentments is between us and them in a society. There's a pattern here through history I think Donald Trump is smart enough and strategic enough to know what he's doing by repeatedly using the dog, the imagery of a dog as a slur to attack his perceived political enemies.