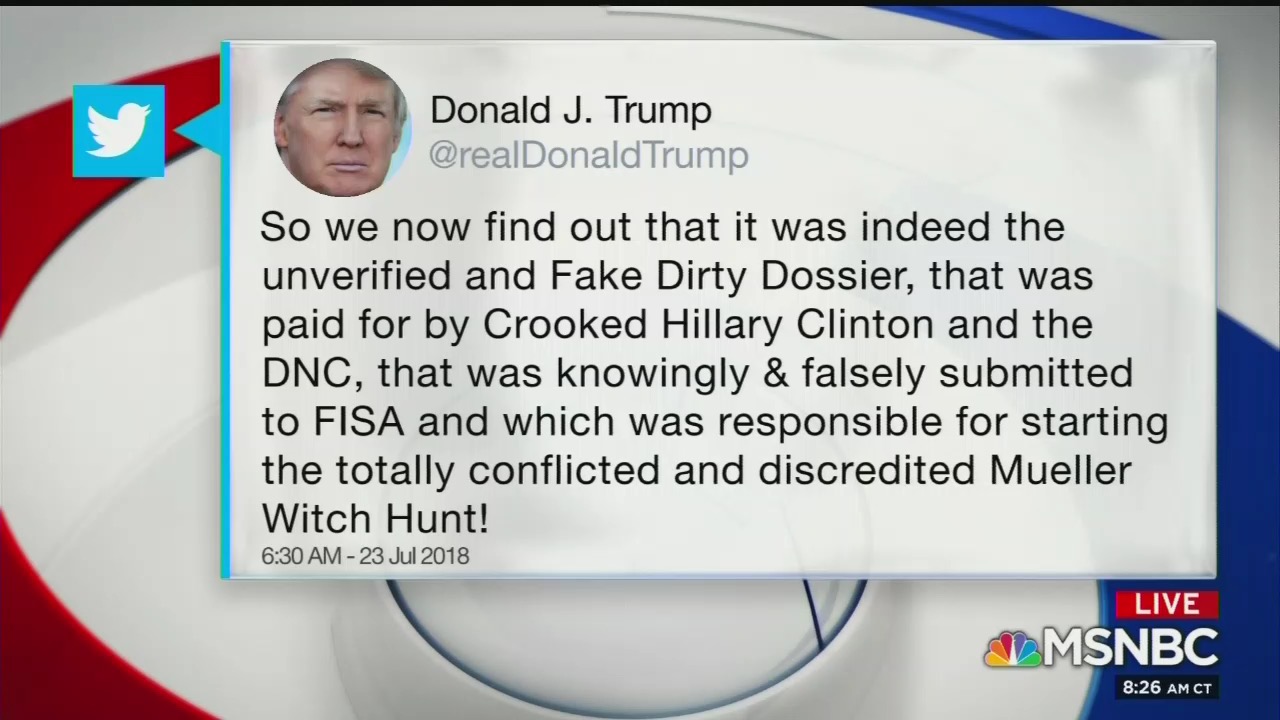 Flying in the face of reality, CBS News and the Associated Press issued a joint “fact-check” of the President this week, claiming that he was wrong to call the infamous DNC-funded Steele dossier a “Clinton campaign document.”

After the FBI released their FISA warrant application of former Trump campaign adviser Carter Page Monday, which revealed the FBI used the dossier as a basis for obtaining that warrant, Trump tweeted:

So we now find out that it was indeed the unverified and Fake Dirty Dossier, that was paid for by Crooked Hillary Clinton and the DNC, that was knowingly & falsely submitted to FISA and which was responsible for starting the totally conflicted and discredited Mueller Witch Hunt!

“It was classified to cover up misconduct by the FBI and the Justice Department in misleading the Court by using this Dossier in a dishonest way to gain a warrant to target the Trump Team. This is a Clinton Campaign document. It was a fraud and a hoax designed to target Trump....

Bending over backwards to defend the DNC and Clinton campaign, CBS and AP claimed Trump’s tweet was false, in a “fact-check” the same day:

THE FACTS: Wiretap requests are routinely classified to protect sources and methods, not to cover up misconduct by the FBI or Justice Department.

Multiple news organizations, including The Associated Press, requested that the government release the documents under the Freedom of Information Act. The New York Times and others sued for its release, resulting in the documents being posted to the FBI's website.

It's also not correct to call the Steele dossier a "Clinton Campaign document." Steele was hired by Fusion GPS, a private research firm that in turn was hired by a law firm that represented the Democratic campaign. But Clinton's closest aides said they didn't learn about the research until after the election, which is probable considering they never raised the allegations publicly.

Even though it has long been reported that the DNC did indeed pay for opposition research on then-candidate Donald Trump for the Hillary Clinton campaign, the liberal fact-checkers bent over backwards to claim otherwise. They even ludicrously claimed that it wasn’t “probable” that the Clinton campaign paid for the dossier because they never talked about it publicly. What?

The Federalist’s Sean Davis first noted the horribly wrong fact-check on the CBS News’ website and called them out on Twitter:

Others rightly noted that even other liberal outlets backed Trump’s statement, such as this October 24, 2017 article from the Post:

The Hillary Clinton campaign and the Democratic National Committee helped fund research that resulted in a now-famous dossier containing allegations about President Trump's connections to Russia and possible coordination between his campaign and the Kremlin, people familiar with the matter said.

We have rated this "fact-check" by CBS and the Associated Press as Fully Fake. For similar analyses, please visit our Fact-Checking the Fact-Checkers site.