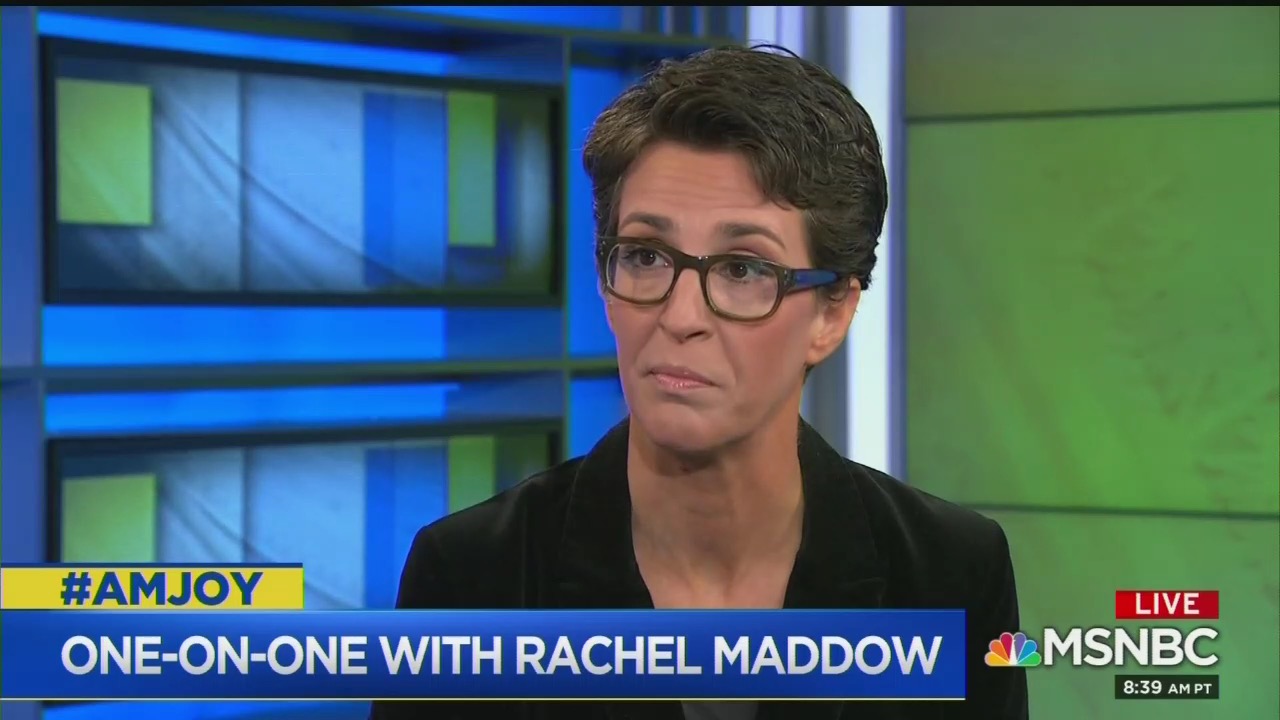 Apparently sharing your wacky conspiracy theories is what counts for as news these days on MSNBC. Host Rachel Maddow sat down with Joy Reid on her AM Joy show July 21 to freak out about President Trump’s press conference with Vladimir Putin last week, gushing that his behavior clearly meant that he was secretly colluding with the Russians.

AM Joy host Joy Reid introduced her fellow MSNBC host by complimenting her as someone who thought with a clear head above the chaos of the news cycle. Which made Maddow’s comments afterwards all the more ironic:

JOY REID: I don't know about you, but we here at AM Joy our heads have been spinning with the nonstop barrage of news this week, so I turned to our in-house expert of making sense of all things madness. Rachel Maddow.

Reid went on to portray the media’s dogged attempt to prove President Trump colluded with Russia to win the election as a never-ending battle, and asked Maddow if the press conference was finally the answer to what they had been searching for.

Maddow claimed this was the first time the country collectively got upset at Trump for how he handled himself around Putin, asking if he was “subordinate to a foreign power.”

“All of a sudden the country has new clarity about the extremity of the concern about the president,” she gushed, adding that it was already established that Russia colluded to help Trump win the 2016 election and that more “time” was needed to prove that his team willingly worked with them to make that happen.

All things considered, she bemoaned, “The worst case scenario that the president is a foreign agent suddenly feels very palpable:”

MADDOW: The thing that feels new after Helsinki is that the country is shook up and freaked out about it. I mean, the president being oddly and inexplicably and completely deferential to Vladimir Putin is no big surprise. If he had been anything other than that it would’ve been a big surprise. The thought of him doing that to his face, instead of just presumably on their bat phone or however they communicate.

But the fact he did that in person standing next to Putin that shook the country. And I think -- I don't think Republicans are excluded from that. And so I think what that means is the president is not necessarily doing anything new but all of a sudden the country has new clarity about the extremity of the concern about the president. It's not just did the president get help from Russia to win his election? Yes, he did. What kind of documentation is there and what evidence will ultimately turn up about whether his campaign knowingly accepted that help or maybe worked collectively with the Russians in order to pull off their hack, that continues to be the legal battle that we watch unfold, but there's this base level question. Like maybe we've taken so many turning points, we've turned so many corners, we're back where we started.

The basic question which I think rung so loud for everybody in the country this week was, is our president subordinate to a foreign power? Does our president answer to a foreign government and a foreign leader? And that's private meeting with Putin where nobody knows what he promised or what he may have given away. The way he responded to Putin when we saw him face-to-face and then the fact that he took under consideration all of these demands from Russia, including handing over Americans to Russia for interrogation. That just -- you know, it makes the worst case scenario really palpable. The worst case scenario that the president is a foreign agent suddenly feels very palpable.

Reid agreed, asking Maddow if Trump really agreed politically with Putin or if he was being “intimidated” to be deferential. Citing “spy movies,” Maddow theorized that Putin’s hold on Trump was more subtle than what they had been looking for. Claiming that Trump “feared” Putin, she argued that he “compromised” and “betrayed” the U.S. by acting in lock-step with the Russian leader:

REID: There are two ways to look at the way Donald Trump responded to Vladimir Putin. He did sort of shrink before our eyes standing next to him. But there are two ways to look at that. Either Donald Trump is ideologically aligned with Vladimir Putin and he just shares his world view and he couldn't hide it because he shares it or to your reporter's eye did that look like intimidation?

MADDOW:I don't know. I don't know body language and I don't know those two things are exclusive to each other. You know, the more that I talk to intelligence professionals and people who have brought espionage cases and people who have really dealt with these spy movie scenarios in real life, the more you hear that the behavior of a compromised person, a person who is effectively coerced because of something, not a foreign leader, a foreign government, foreign intelligence service has over them, the more subtle the signs can be. It may not be totally transactional. It may not be, we've got this thing about you that we're going to expose unless you do our bidding. Therefore, hand us this secret. It may not always be transactional. It may be there's just a fear factor where that person who is compromised knows they need to align themselves in every way completely with the views and the preferences of the person who has something on them. So, it may be that they just line up all of their values, their policy positions, their ideologies, anything else that you need so they'll never be out of step with the person who effectively controls them. You don't need a pay me back, pay me back, pay me back transactional interaction in order to live as a compromised person and betray your country in that way.

Of course this entire argument ignores the fact that Trump’s actions on Russia have been much different and much harsher than his rhetoric at that press conference.

It seems like pinning Trump as a traitor to his country is the left’s latest far-fetched attempt to oust him out of office. NewsBusters recently compiled a video highlighting the worst of the media’s attacks calling Trump “treasonous” in over 7 hours of programming on CNN alone.