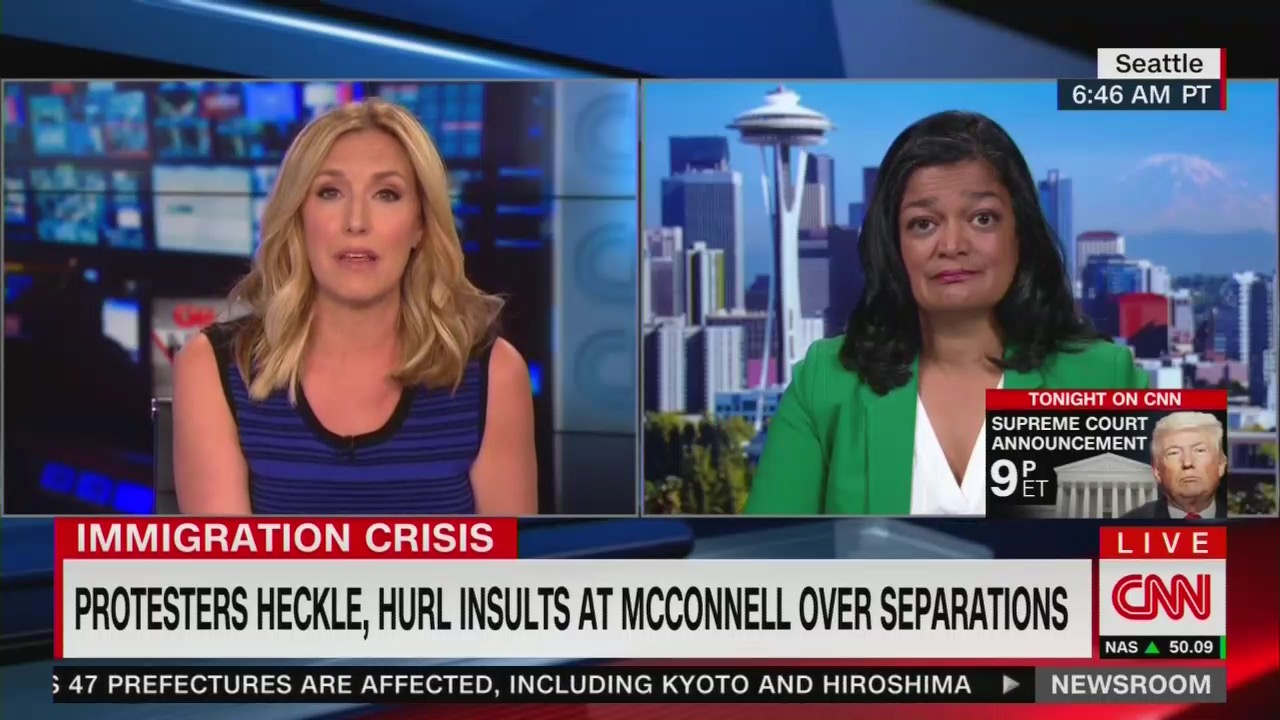 On CNN Newsroom Monday morning, anchor Poppy Harlow barely pressed Democrat Rep. Pramila Jayapal about liberal, anti-ICE protesters threatening Republican leader Mitch McConnell over the weekend. While Jayapal has been a vocal supporter of abolishing ICE, she didn’t condemn the harassment, and actually seemed to justify it. Instead of demanding the Democrat condemn this behavior, Harlow caved easily to Jayapal’s flippant response.

Towards the end of the 9:00am EST hour on CNN, Harlow invited the Democrat on to gush about how difficult it has been to reunite illegal immigrant families, and how we didn’t need ICE anymore. Towards the end of the conversation, Harlow finally pressed Jayapal slightly on an issue she should’ve had no problem condemning.

As the Daily Caller reported yesterday, a small group of socialist protesters in Louisville, KY confronted Mitch McConnell as he was walking to his car from a restaurant, Saturday. The group hurled petty insults at the Senator (“turtle head!”) and slogans like “Vote you out!” and “Abolish ICE!” But in the video that their own group proudly posted online, you can hear one of the men also threatening, “We know where you live, Mitch!”

While ABC and NBC ignored the video today in their morning coverage, Harlow did ask Jayapal about it as her closing question. After playing the video, the CNN host couldn’t muster any outrage, meekly asking, “Is this productive?”

HARLOW: Before you go, I want your reaction to how some that oppose the policy oppose Republican lawmakers on this front are choosing to deal with it. The Washington Post is reporting that Senate majority leader Mitch Mcconnell was followed to his car on Saturday by a group of protesters chanting and screaming at him, abolish ICE and some other personally demeaning things. Let's play this.

HARLOW: So they yelled ‘Vote you out’ ‘Abolish ICE’ , someone else called him a quote ‘turtle head,’ following him to his car. Is this the best way for Democrats to get their message across? Is this productive?

While Harlow didn’t call out the protester who threatened McConnell, Jayamal didn’t express any regrets over what the protesters did. In fact, she seemed to justify it as an act of a working “democracy.” As the left likes to do, she quickly turned the blame back on President Trump:

JAYAMAL: Look, I think that people are deeply angry about the fact that kids are in cages and parents have been separated from their families. And I think that people to me ‘vote you out’ is not what I'm chanting at Mitch Mcconnell but if people want to say that somebody should be voted out because they are doing things that undermine America's core democracy, that to me is a part of democracy.

If you really want to take on people who are saying terrible things, I think we should take on the President of the United States who has said some absolutely horrible demeaning things to all kinds of people. Do I think that at the core we are talking about American democracy and about making sure that families can stay together, about making sure that the United States remains a place that we are proud of for upholding human rights, a leader in the global fight for justice, those are the kinds of things that I am focused on.

And I think that we should keep the focus where it should be, which is on the fact that the Trump administration and Donald Trump himself put into place a policy that has gone completely out of control. That his administration cannot even meet a court order that says that these families should be put together, that these kids should not be put into detention. Over 3,000 children who have been detained and separated from their families as young as six months old, that is an outrage on U.S. soil. I think that's where the attention should be.

Harlow didn’t press the Democrat any further, concluding the interview by thanking her for coming on the show.