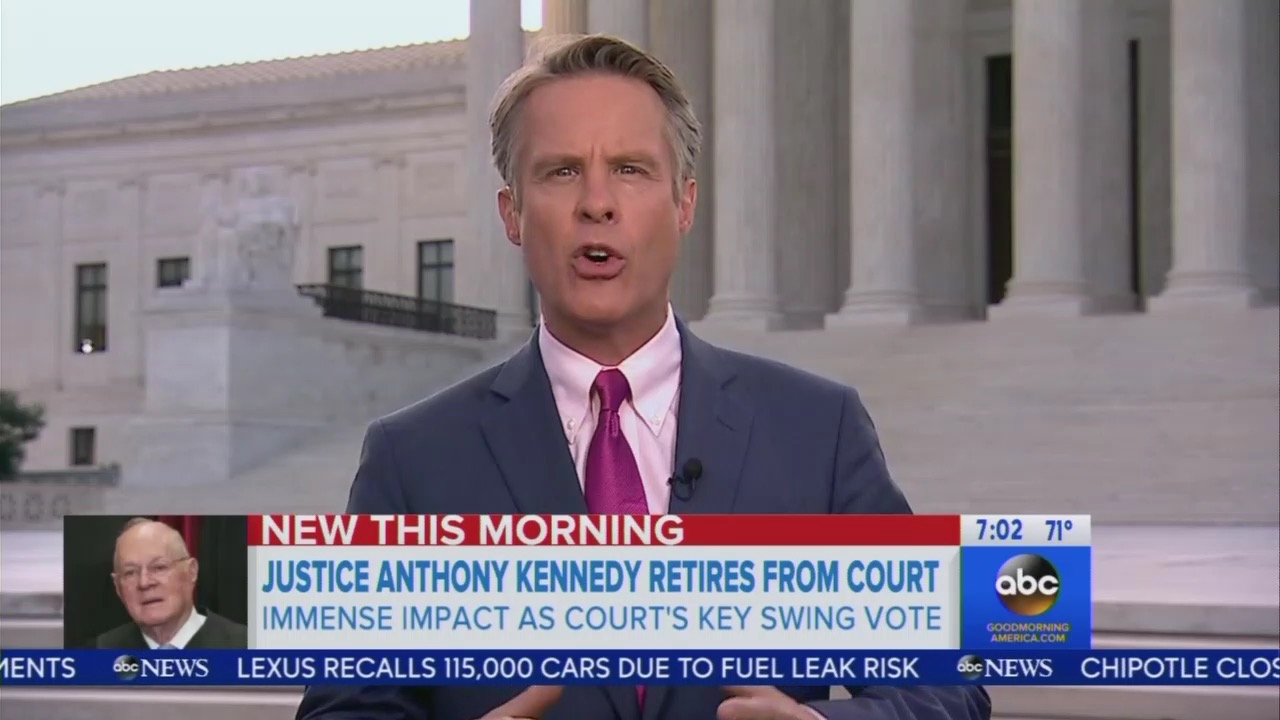 Thursday morning on ABC’s Good Morning America, journalists for the network continued losing their collective minds over Supreme Court Justice Kennedy’s announcement that he was retiring from the bench. ABC led its morning coverage Thursday with three reports, portraying the news that President Trump would pick his successor, as a move back into the Dark Ages with abortion rights at stake. “It guarantees that this court and this country is going to change profoundly,” correspondent Terry Moran gushed.

Anchor Robin Roberts opened by noting dramatically that “every American” could be affected by this new SCOTUS pick. Correspondent Terry Moran touted the announcement as something to be dreaded: “Here at the Supreme Court, this noble building so often seen as a rock of stability in a tumultuous world is really shaken to its core today,” he stated.

Giving a rundown of different monumental cases that Kennedy had been the deciding vote on, giving particular attention to gay marriage and abortion, Moran touted the possibility that such crucial issues for the left could now be at risk, with Trump at the helm: “Now the President will choose Kennedy's successor, the stakes could not be higher,” Moran touted. “[T]his country is going to change profoundly,” he added.

Afterwards, anchor George Stephanopoulos and White House correspondent Jon Karl hyped the “epic” and “titanic” battle Trump would face with Democrats over securing his Supreme Court nomination. The security of abortion was the primary concern of ABC. Karl’s report used biased terms on abortion to portray pro-life conservatives as the villains here, saying, “Anti-abortion activists are calling it a pivotal moment while abortion rights defenders are saying they are in dire immediate danger.” Karl also touted pro-abortion groups like NARAL and Democrats worrying about Trump picking a pro-life judge, while not touting similar soundbites from equivalent pro-life groups or Republicans happy about the possibility.

Karl and Stephanopoulos also hyped the idea that liberal Republicans like Susan Collins and Lisa Murkowski would block the president’s pick.

Afterwards, GMA brought on their chief legal analyst Dan Abrams to fret some more about the security of Roe v. Wade. Abrams repeated what he said previously on World News Tonight, that abortion rights were certainly in danger of being “gutted” with Kennedy retiring.