What? Chris Matthews: Trump ‘Goes After’ Pelosi Because She’s ‘An Ethnic Sort of Person’ 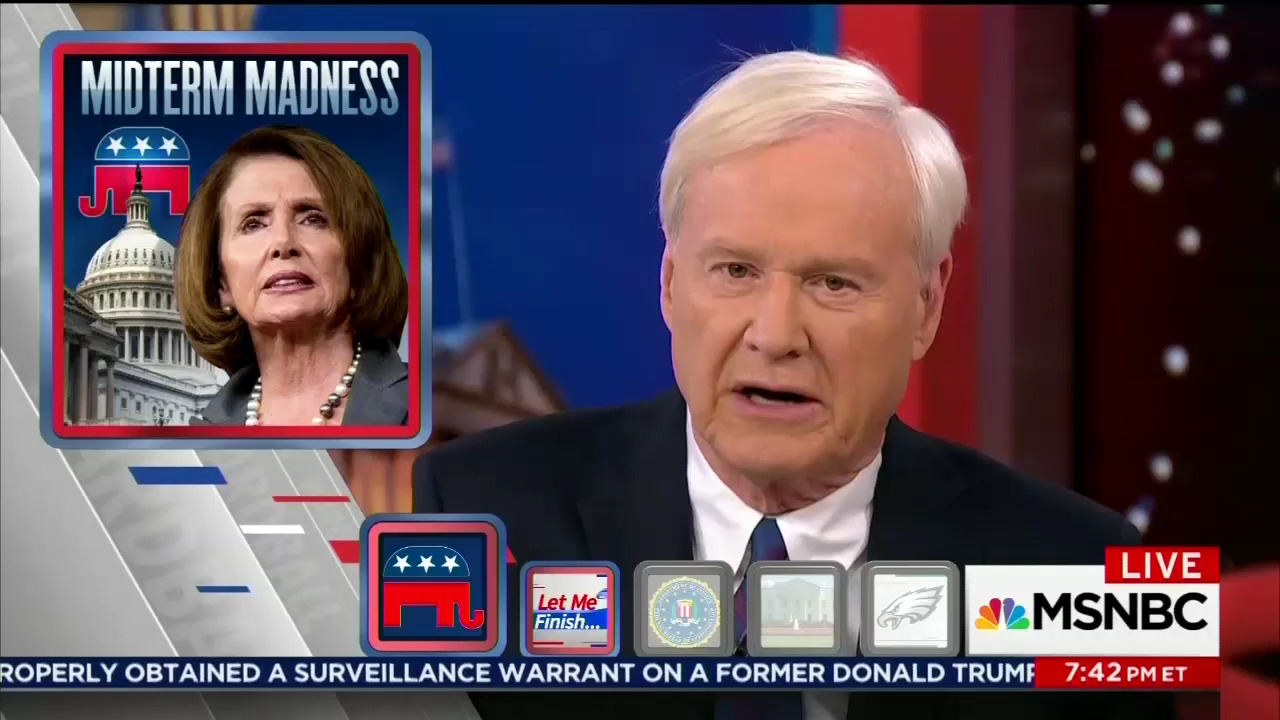 In his latest nutty rant, MSNBC's Hardball host Chris Matthews adamantly argued that President Trump didn’t like Nancy Pelosi because she was “ethnic.” To back up his crazy point, Matthews cited another white person that Republicans supposedly attacked because they were “ethnic,” former House Speaker from Massachusetts, Tip O’Neill.

“They love to get an ethnic sort of person from one of the coasts and make them the bad person,” Matthews gushed.

The whole thing started when the Hardball host called out President Trump for daring to criticize Democrat Nancy Pelosi. On his February 5 show, Matthews played a tape of Trump saying that he hoped Pelosi would stay in office because she’s so unlikeable, that she would help Republicans win in midterm elections.

But Matthews complained that historically, it’s the party that’s out of power that succeeds in the midterms. “President Trump is also historically unpopular with his approval ratings,” he added before strangely making Trump’s criticism of Pelosi a racial one.

Turning to guest and Axios editor Alexi McCammond, he asked why Republicans always chose to attack “ethnic” people from the coast, lumping Pelosi into that group:

“They love to get an ethnic sort of person from one of the coasts and make them the bad person!” Matthews gushed to end his rant.

Ignoring the host's loony, nonsensical rant, McCammond agreed that it was “easy” for the right to paint Pelosi as a coastal “elitist.”

“Right, well it's easy to paint her as some sort of San Francisco elitist who doesn’t really understand middle class America because of her crumbs tax cut comment. But after Paul Ryan botched it with the $1.50 tweet, it’s sort of a wash now,” she argued.

Matthews prompted her to explain the tweet, to which he chuckled, “That was worth bragging about?”

After his guests pointed out Pelosi’s “crumbs” comment cancelled out Ryan’s gaffe, Matthews shrugged and said: “Who sounds more stupid? I don’t know.”

Fellow guest and NBC News digital reporter Jonathan Allen noted that despite Trump’s comment about Pelosi, Ryan has portrayed himself as an every man sort of figure, so his comment was “so out of touch” with the Republican base.

But Matthews still wanted to make the conversation about racism so he immediately asked his guests again if Trump’s comments were “ethnic politics:”

“What about this ethnic politics? Ok Nancy Pelosi looks well off, she’s well dressed, she seems like somebody who comes from pretty good circumstances. Is that why they go after her? Why don't they go after Pelosi, why do they go after all of these people?” Matthews again weirdly brought the discussion back to race.

“Her favorable numbers are horrific,” Republican strategist John Brabender argued. “You think Donald Trump's numbers are--” he started to say before being cut off.

“Are they worse than Paul Ryan's?” Matthews interrupted.

“I'm sure that they are,” Brabender quickly responded before urging Republicans to tout their positive achievements instead of attacking Democrats in leadership:

Here's my problem. I think it's a mistake of our party to think that the way we're going to win the 2018 elections is by going -- I think we have a great story to tell. We have a much better story to tell than four weeks ago. 3 million people just got bonuses. We've got the lowest unemployment rate in 17 years. ISIS is on the run.