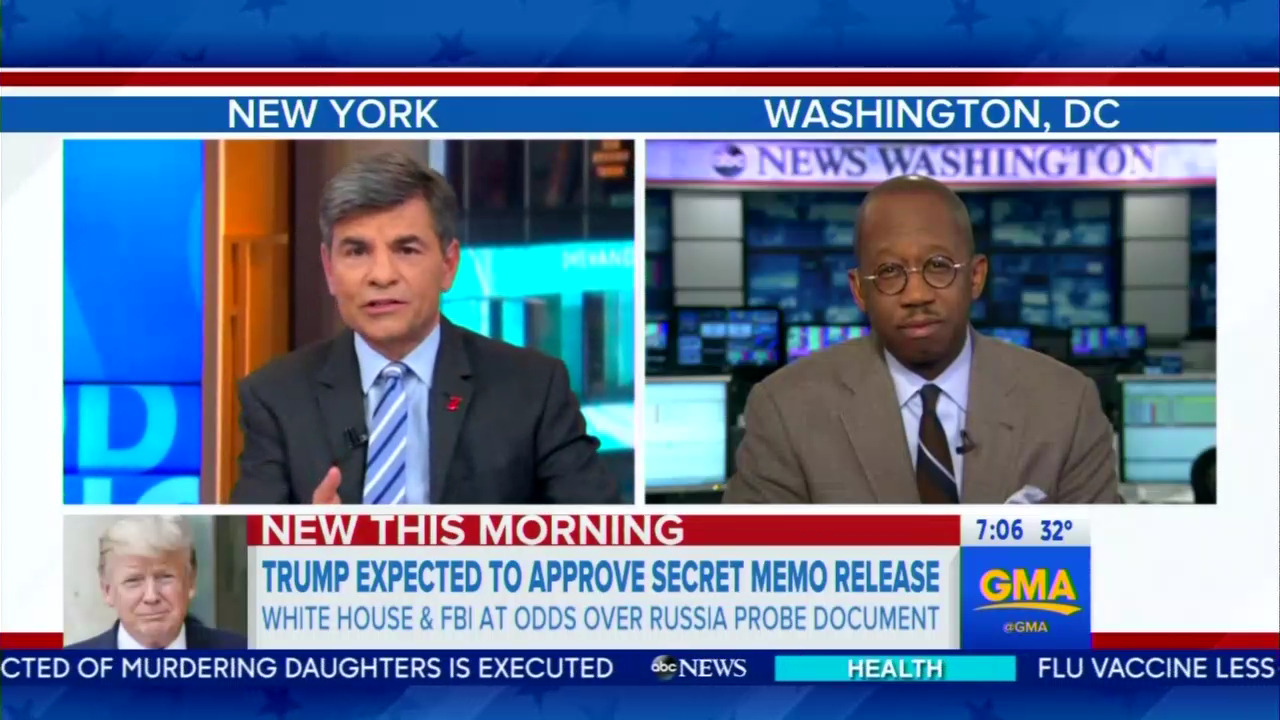 Good Morning America anchor George Stephanopoulos practically had a conniption on Friday’s show, complaining he was "stunned" by a single tweet from the president questioning the FBI and Justice Department’s impartiality around “release the memo.”

As soon as the show had begun, Stephanopoulos jumped right in to tout the tweet as the “bitter” final straw between Trump and the two organizations.

“We begin with the bitter showdown over the secret Republican memo and a brand new attack from President Trump on the top leadership of the FBI and his own Justice Department after they warn against a release of that memo,” the former Clinton staffer and donor hyped.

Handing off to ABC’s Chief Justice Correspondent Pierre Thomas, the anchor gushed, “Pierre, this is an extraordinary attack from the president!”

The tweet that Stephanopoulos was so anxious about is below:

The top Leadership and Investigators of the FBI and the Justice Department have politicized the sacred investigative process in favor of Democrats and against Republicans - something which would have been unthinkable just a short time ago. Rank & File are great people!

Calling the “GOP memo” “controversial” and going “against the wishes of the FBI,” Pierre Thomas complained that Trump was “ignoring questions” from reporters on the movement to release the memo.

Chief White House Correspondent Jonathan Karl was then shown on a tape from yesterday frantically yelling out at President Trump as he’s leaving, “Mr. President, what about the FBI director's grave concerns? Don’t you trust him?”

“George, weasel, liars? This is clearly now completely personal between Comey and the president,” he noted.

But Stephanopoulos wasn’t done putting 110% of the blame on Trump.

“But that’s not all Pierre,” he quickly responded. “What’s really ‘unthinkable’ here, is this kind of open warfare, open attack from the president,” he slammed. “This is extraordinary,” Thomas agreed.

After all that hand-wringing, Stephanopoulos turned to Chief White House Correspondent Jonathan Karl to downplay the memo as maybe not being as revealing as Trump had hoped. Karl agreed, saying, “There's definitely a concern that this could turn into -- turn out to be quite a dud,” he shrugged.

So which one is it, the most damning and “inaccurate” memo ever, as ABC is spinning, or a big nothingburger?

Deciding to end the report with more dramatics, fellow anchor Robin Roberts turned to Stephanopoulos to worry about the “unchartered territory” Trump was forging.

“George, you know, we keep talking about unchartered territory and these tweets this morning--” she began as Stephanopoulos jumped in.

“It stunned me,” the anchor gushed, before claiming that the entire White House administration couldn’t reign in the president from tweeting and “ratcheting up” the controversy:

“Everybody behind the scenes at the White House they knew this was coming but they were trying to lower the tensions and the president just ratcheted it right up this morning,” he opined.

In the 8:00 hour Stephanopoulos and Karl again fretted over the “extraordinary” “attack” by President Trump on the FBI and Justice Department, repeating that adjective another two times in the little over a minute news brief.

To read the full transcript from the exchange during the 7:00am EST hour of Good Morning America, read below:

GEORGE STEPHANOPOULOS: We begin with the bitter showdown over the secret Republican memo and a brand new attack from President Trump on the top leadership of the FBI and his own Justice Department after they warn against a release of that memo. Want to go right to our Chief Justice Correspondent Pierre Thomas. And Pierre, this is an extraordinary attack from the president!

PIERRE THOMAS: Yes, good morning, George. The president is on the attack just tweeting, “the top leadership and investigators of the FBI and the justice department have politicized the sacred investigative process in favor of Democrats and against Republicans. Something which would have been unthinkable just a short time ago. Rank and file, are great people.” This morning, with the white house poised to authorize the release of that controversial GOP memo against the wishes of the FBI, President Trump is ignoring questions.

JON KARL: Mr. President, what about the FBI director's grave concerns?Don’t you trust him?

THOMAS: In a speech at the RNC overnight. The President sounding upbeat.

TRUMP: Did anybody not see the State of the Union? Because even the haters back there gave us good reviews on that one.

THOMAS: But not mentioning that memo which sources tell ABC news suggests the FBI showed political bias against the president. The president suggesting after the State of the Union that he wants that memo made public.

THOMAS: But his hand-picked FBI Director, Christopher Wray, flatly disagrees and FBI officials issuing a statement about their grave concerns about material omissions and the memo's accuracy. Wray backed by the more than 13,000 member FBI agents association thanking him for standing shoulder to shoulder with the men and women of the FBI. House Speaker Paul Ryan says the memo is not an indictment of the FBI or the Mueller investigation.

PAUL RYAN: If mistakes were made and if individuals did something wrong, then it is our job as the legislative branch of government to conduct oversight over the executive branch if abuses were made.

THOMAS: But Democrats on the House Intelligence Committee say the memo is pure politics.

ADAM SCHIFF: It seems to be based in an effort to undermine Bob Mueller to protect the president. I have not seen a shred of evidence that would suggest that there's been an abuse in the Russia investigation.

THOMAS: The report was written by Republicans on that committee. Chaired by congressman Devin Nunes, an ally of President Trump who served on his transition team. Sources tell ABC news it accuses the Justice Department of acting inappropriately when it sought a surveillance warrant in October of 2016 for a former Trump campaign adviser suspected of being a Russian agent. Critics say the document is cherry-picked and a top Republican on the Senate Intelligence Committee is now openly supporting the FBI ct director who is in defiance of the president.

SEN. JAMES LANKFORD: I would tell you there is no FBI director that hasn't faced undue political pressure and I think he's handling the pressure well.

THOMAS: Former FBI director James Comey last night weighing in with a tweet, quote, “all should appreciate the FBI speaking up. I wish more of our leaders would but take heart, American history shows that in the long run, weasels and liars never hold the field. So as long as good people stand up..” George, weasel, liars? This is clearly now completely personal between Comey and the president.

THOMAS: This is extraordinary and you have the FBI Director laying out his Independence in open defiance of the president. They're all waiting to see if this memo is going to be released. Comey and the leadership have been, you know, weighing in from the outside. Now we expect Wray to respond to the president after this memo comes out, George, and, again, they're waiting on the memo to be released and to see how the FBI rank and file respond to it.

STEPHANOPOULOS: Okay, Pierre, thanks very much. We want to get more on this now from our chief White House Correspondent Jon Karl. Jon, I don't think this tweet was part of the white house plan, this morning, even though we were expecting this memo was going to come out. There’s been an extraordinary behind-the-scenes lobbying effort from the FBI and the Justice Department directed at the White House Chief of Staff John Kelly and they were trying to lower tensions even as they knew the memo was coming out.

JON KARL: But they know how upset the president is. They talk as if there is open warfare between the president and the upper reaches of the FBI and the Justice Department. Think about this, George, you’re talking about the FBI director, the Deputy Attorney General and several other top officials at the FBI over the last 48 hours have come in here and pleaded with the white house to block the release of this memo. Even the Director of National Intelligence who is all of these people appointed by the president, we know the president believes in a deep state conspiracy against him. Now it appears he believes that deep state conspiracy includes people that he himself put in place.

STEPHANOPOULOS: Yeah and that second tweet the president put out this morning, he seems to be pushing the line that the Democrats are all behind this surveillance of the Trump campaign, that the Hillary campaign funded this dossier, that convinced the Obama administration to do some surveillance of the Trump campaign officials. Yet, this was something approved by by the president's own Deputy Attorney General.

KARL: Which is -- that's Rod Rosenstein and that is what's going to put him under so much pressure here, the original order comes before Rosenstein but he re-approves it, pushes it again after the president is elected so he's approving the surveillance of a top Trump campaign former associate while the president is in the White House. That's why he is under so much fire.

STEPHANOPOULOS: Jon, one final question, other white house aides who have seen this memo think it might not be as powerful as the president thinks.

KARL: There's definitely a concern that this could turn into -- turn out to be quite a dud and, remember, George, as this memo was reported, the one thing that we already know about this memo and repeated every time it is mentioned, is that the FBI believes it is misleading. That it paints an incorrect picture of what has happened.

STEPHANOPOULOS: Which is why they have grave concerns about it. Jon Karl, thanks very much. Michael.

ROBIN ROBERTS: George, you know, we keep talking about unchartered territory and these tweets this morning --

STEPHANOPOULOS: It stunned me. We were planning a different show this morning until this came in around 6:40 because as I said to Jon, everybody behind the scenes at the White House they knew this was coming but they were trying to lower the tensions and the president just ratcheted it right up this morning.