Kimmel: America Is ‘Cruel’ Not 'Compassionate or Exceptional’ because of DACA 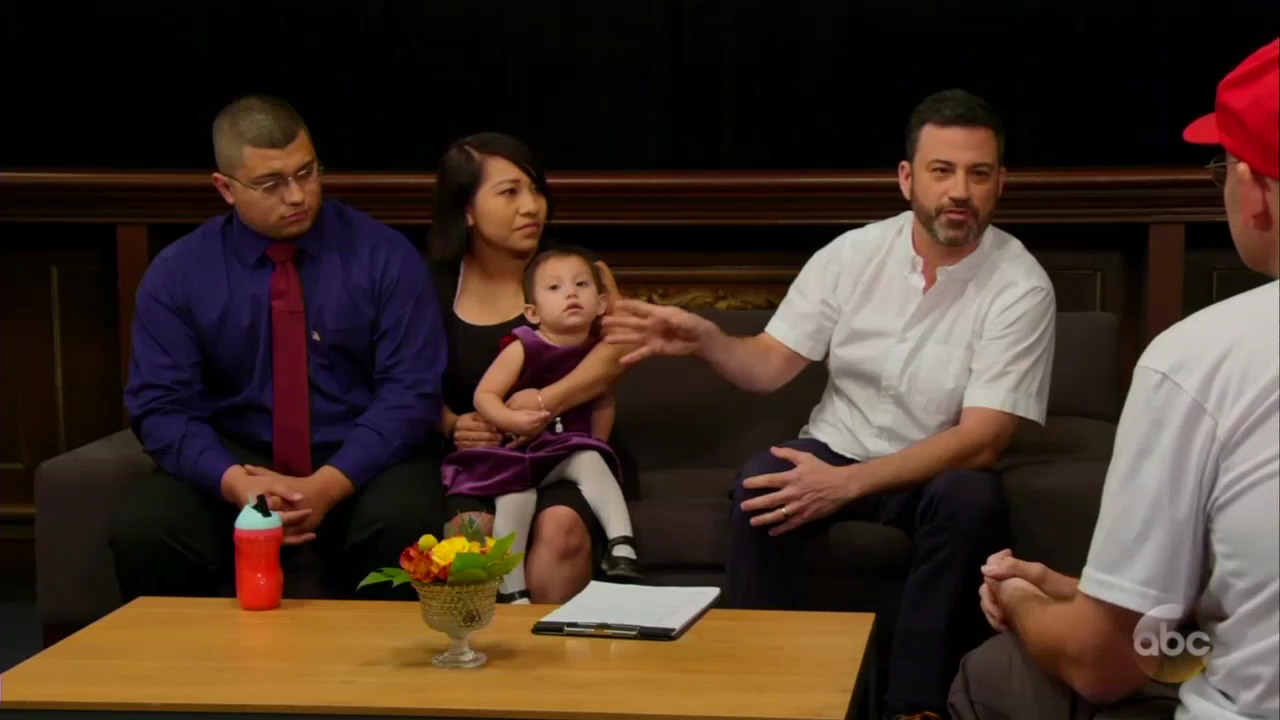 ABC played a pre-taped segment where Kimmel sat down individually with Trump voters and conservatives who were against DACA being renewed. Kimmel then brought this small group into a room and introduced them to a couple with a baby, who faced deportation if the DREAM Act did not get renewed in March, asking the group if they still held their same stance on immigration, when “face-to-face” with a real-life person who would be impacted by the legislation.

“You told me a minute ago you’re a die-hard conservative Republican,” Kimmel introduced himself to an older Hispanic woman, who explained that she came to the country legally and expected others to follow the “rule of law” as well. The talk show host also talked with two men in “Make America Great Again” hats, and three other women in favor of legal immigration.

He then brought them all into a room to meet a young Hispanic woman named Esmeralda, her infant daughter Rose, and her fiance Michael, who is an American citizen and in the military.

Kimmel quickly guilt-tripped the older man wearing a MAGA hat, addressing him as a “former military guy” who should have more compassion for his “fellow veteran”:

Michael is being deployed soon overseas. Which leaves his fiance and his daughter behind. Which means his fiance could be sent back to Mexico while he's overseas. So do you think a man who serving this country who is an active member of the military do you think he should be treated like this?

The group defended their pro-legal immigration stance against Kimmel, playing the activist. Though the conversation was clearly edited down for brevity purposes, one part of the discussion ABC chose to leave in the segment revealed just how far of a leftist Kimmel is on his views on immigration and America as a whole. At one point, the Hispanic woman, who said she came to the country legally, tried to reason with Kimmel, appealing to his patriotism. She said:

“We can agree to disagree but I know you will concur with me that we live in a most loving and compassionate and exceptional country,” she posed. Kimmel remarkably disagreed, calling America “cruel”:

“No I don't agree with that. I think this country has become cruel. I mean look at this woman and her husband who is in the military. Where is your compassion?” Kimmel shot back, as the group reacted with shock.

Michael lectured the group, telling them that they didn’t understand how hard the process to stay “documented” was.

Another young man in a MAGA hat started to share a story of a conversation he had with a DACA recipient. Mid-sentence Kimmel attacked the man with a look of utter disgust on his face, saying, “I’m trying to imagine you as a little boy. Yeah, I think I can,” before pointing to someone else in the crowd to let them talk instead.

It wasn’t until the very end of the segment that anyone stated the obvious, that if Esmeralda just married Michael, she would be given green card status and this whole ploy by Kimmel wouldn’t even be able to take place. But Kimmel dismissed that argument from the group as if it wasn’t a valid point.