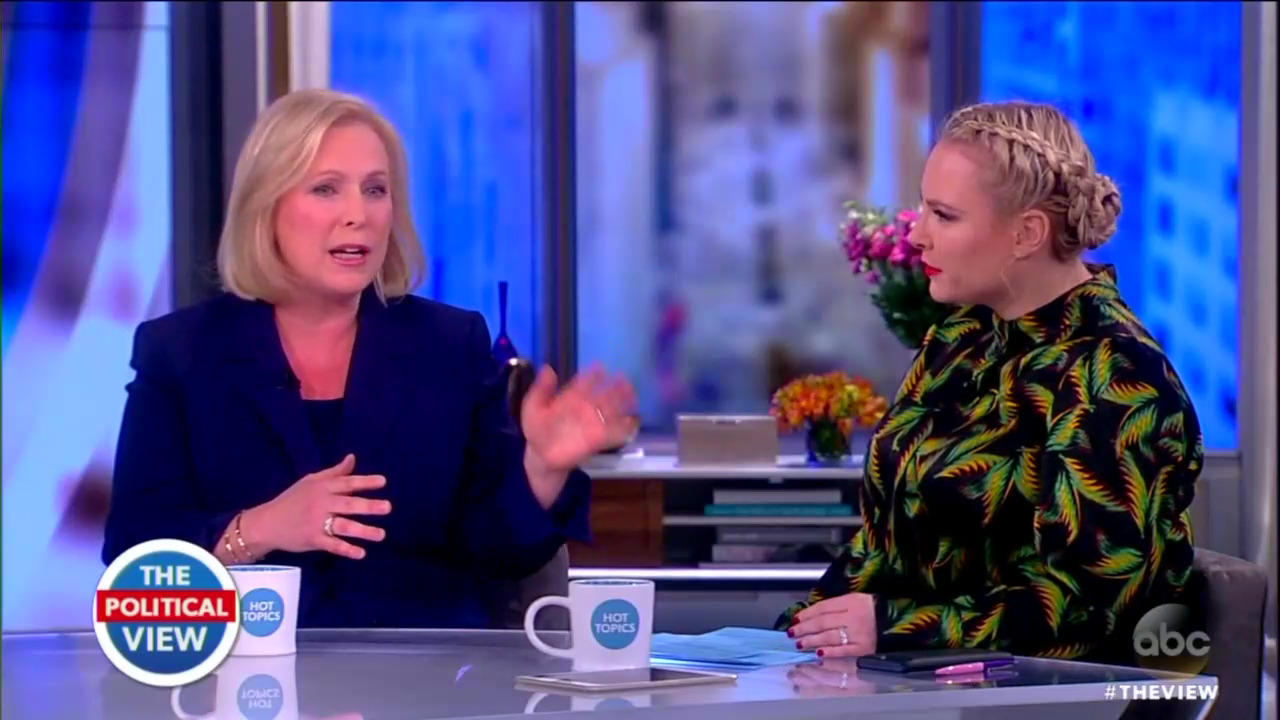 Monday on ABC’s The View, Democratic Senator Kirsten Gillibrand (N.Y.) fielded questions that were a mixture of softballs and tough questions from the panel. The only co-host to ask the Democrat politician about Hillary Clinton’s latest scandal was Meghan McCain, who pressed Gillibrand to weigh in on her party’s former presidential candidate decision to keep an accused sex harasser on her 2008 campaign.

Though the questions were largely friendly, co-host Joy Behar did have one sticking point with Gillibrand, complaining that she shouldn’t have pressured Democratic Sen. Al Franken (Minn.) to resign after the sexual assault allegations against him became public. The Trump-obsessed host kept comparing the Franken accusations to the accusations against Trump and wondered why the Democrats weren’t trying to impeach Trump instead.

“I just thought that was unfair to make him an example when the President of United States, so many allegations of sexual harassment against him and I don't see him going anywhere!” Behar whined.

Gillibrand seized on that spin as the perfect opportunity to take the focus off of Franken. “He should be held accountable. I have no heard that from any Republicans...Where are the hearings on all of these allegations of sex assault and sexual harassment?” she wondered.

The two kept attacking Republicans’ “silence” over Trump, but disagreed on whether or not Franken should’ve resigned, with Behar complaining that Democrats had given too much of their ground away with Franken while Republicans got to keep Trump in office.

After this lengthy back-and-forth, McCain took the moment to highlight “some inconvenient truths” on the Democrats side.

She touted that Clinton was “under fire” for allowing her faith adviser Burns Strider, to stay on her 2008 campaign after being accused of sexual harassment, and asked Gillibrand outright: “You are a longtime supporter of the Clintons and consider her a mentor. Do you think her response this weekend was appropriate?”

Gillibrand refused to actually condemn Clinton directly. She instead dismissed the case as a universal problem of workplace harassment:

As you know, I think these things have to be dealt with whether you're a Democrat, whether you’re a Republican. You need transparency and accountability and no one is above criticism. In that case, I don't know all the details. I don't know if the punishment she chose was the right punishment but what it does bring us to talk about is this issue of workplace harassment.

After that brief answer, Gillibrand essentially let Clinton off the hook, ranting about the problem of harassment in general and how women need to be empowered to speak up. That provided McCain and easy transition into asking Gillibrand why it took her “20 years” to condemn Bill Clinton for his behavior:

Senator, you have dedicated your political career to this fight obviously. That's why people are really surprised that it took you 20 years to say that Bill Clinton should have resigned over the Lewinsky scandal. What do you say to that?

Again, Gillibrand waffled on calling out the sins in her own party. She called today’s culture “very different” than it was when Clinton was in office, basically admitting that Democrats were fine with covering up sexual harassment and assault at the time:

I think this moment of time we’re in is very different. I don't think we had the same conversation back then. The same lens. We didn't hold people accountable in this same way this moment is demanding today. I think all or many of us did not have that same lens, myself included. But today we are having a very different conversation. And there is a moment in time where we can actually do the right thing or fixate on one president.

But McCain wouldn’t let Gillibrand get off that easy. “Do you regret campaigning with him though?” she pressed again.

Unfortunately, Gillibrand again shirked off blame, arguing it wasn’t “about any one president,” even though that’s the exact argument Democrats have made about Trump:

Gillibrand had no problem finding words of condemnation when it came to President Trump, however. After host Joy Behar asked the Senator if she “agreed” with Nancy Pelosi that Trump not budging on DACA was because he “wants to make America white again,” Gillibrand gushed, “A lot of President Trump’s rhetoric is racist….When someone uses the phrase chain migration, it is intentional in trying to demonize families, literally trying to demonize families and make it a racist slur.”