Van Jones Campaigns for ‘Most Beloved Human’ ‘Queen of the Universe’ Oprah, 2020 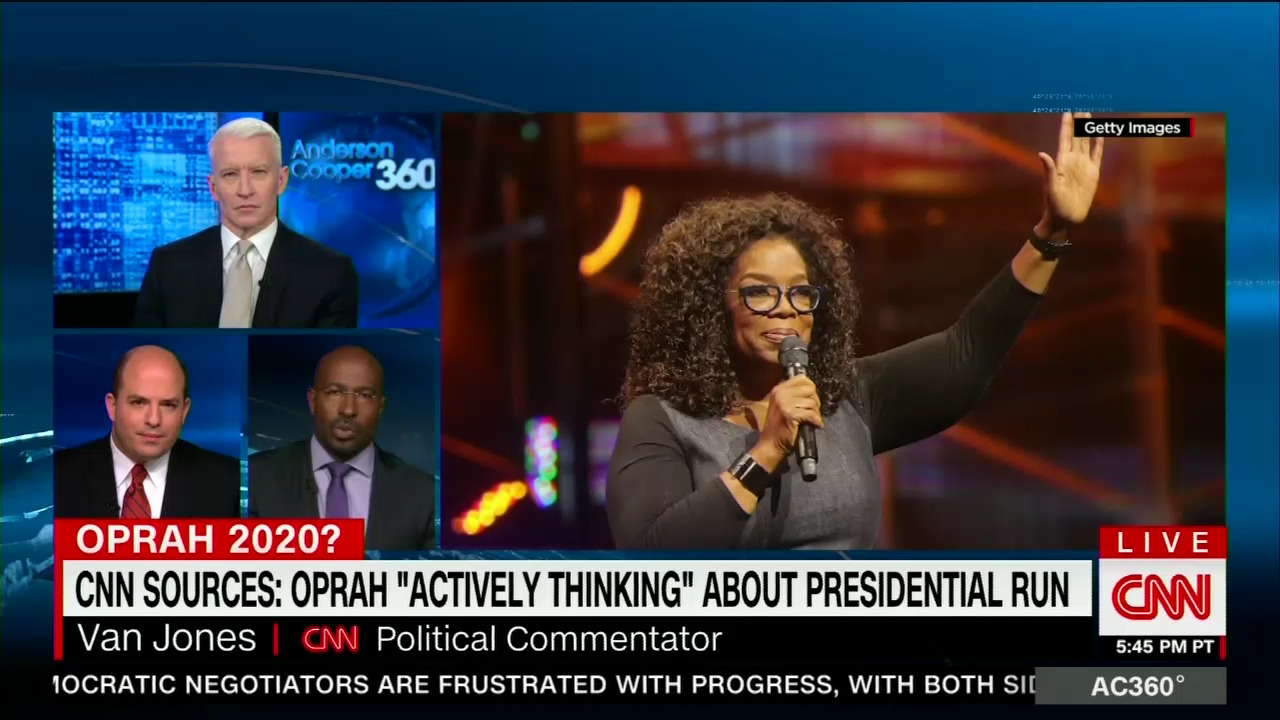 CNN political commentator and former Obama White House staffer Van Jones had a conniption on Anderson Cooper 360 over the news that Oprah Winfrey could run for president in 2020.

In an overly gushy analysis Monday night, Jones admitted he “hoped” she would run, but it would be a “demotion” for the “queen of the universe” to do so.

“Van, as you consider this possibility, what do you see? Obviously, people would have said Donald Trump could’ve never been president and he's president,” Cooper posed to his guest.

“Well, the question is, does she want to be demoted from queen of the universe to President of the United States? That's the only question. If she wants to do it, she can do it,” Jones gushed.

The CNN commentator even compared Oprah’s Golden Globes speech to Barack Obama’s keynote speech at the 2004 DNC Convention, lauding her for doing “what Obama did in seventeen minutes” in “nine minutes."

“I will say that speech last night was extraordinary. That speech, she did in nine minutes what Obama did in seventeen minutes in 2004. She told her story. She told the American story in a way that just was electrifying. If she decides to do this, it is going to be one of the most extraordinary runs in American history,” he added.

Cooper wondered if the messiness of politics would deter Oprah from entering the race. But Jones was too far gone to find any controversy in the billionaire media mogul running:

“Here's the difference with Oprah though. She's already confessed to everything about her life. Her life is an open book!” Jones gushed with excitement.

The tough thing on Oprah might be somebody saying, your life wasn't as bad as you say. Or mistakes you made weren't as awful as you felt like they were. She is uniquely positioned herself to be able to take those blows and turn them into advantages for herself. Listen. I'll say one more thing. Part of what happened with Hillary Clinton was that she was not able to get white women to vote for her. The majority of white women voted against her and for Donald Trump. I do not think that's a problem that Oprah Winfrey will have. I think she'll have women, men, blacks, whites, Latinos, business people, I mean, c’mon!

He admitted that he was “hoping and waiting” for Oprah to announce her bid for president.

The CNN analyst famously fretted after the presidential election results were in that Trump winning was a “white lash” against President Obama.