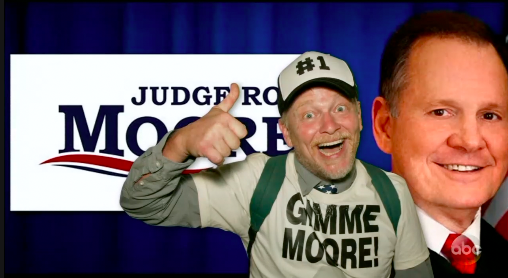 Earlier this week, ABC’s late night host turned activist sent one of his pranksters to Alabama to mock churchgoers and voters there who support senatorial candidate Roy Moore.

Kimmel sent comedian Tony Barbieri, who plays the redneck "Republican" character “Jake Byrd” on Kimmel’s show, to a church where Moore was speaking in Alabama Tuesday night. Kimmel teased the upcoming video of what went down on his Wednesday show, before proudly sharing the footage Thursday night.

“In Alabama there was a rally for Senate hopeful Roy Moore, for some reason they held it at a church, maybe they were hoping he would repent, I don’t know why,” Kimmel snarked. “But on hand to lend his support and to file this report was our friend Jake Byrd, who really likes Roy Moore, a lot,” he added.

Byrd appeared on the video, decked out in a Roy Moore shirt and carrying a campaign sign.

“Honk if you don’t believe women!” he yelled to oncoming traffic. “I’m in Alabama where the libtard media is given Judge Roy Moore the business. C’mon, let’s go support him no matter what!” he shouted to the camera.

Byrd then ambushed several churchgoers outside the church where Moore would soon be speaking, pretending to be on their side only to make them look foolish.

As one woman was decrying the media for “lying” about Moore, Byrd appeared to mock her.

“Exactly, exactly, the lying liberal media. Who'd you rather have, Roy, warts and all, sexual predator, whatever, or a Democrat?” he asked.

“I don’t want no Democrat,” she responded.

“Okay, so we’ll go with sexual predator. Thank you very much,” he snarked. The woman looked offended, defending her answer. “But he’s not a sexual predator! This is ridiculous,” she said complaining to the camera.

The rest of the interviews were similar, with the comedian telling fake stories about Moore for laughs, and getting the people being interviewed on camera to appear ignorant.

After he was done taunting elderly churchgoers, the comic went inside the church where Moore was speaking to disrupt the speech.

Still pretending to be his number one fan, Byrd sat in the front row and interrupted his speech constantly with bursts of exuberance tinged with snarky comments. There was also other left-wing protesters in the back of the room, shouting.

Byrd stood up in the front of the congregation as those protesters were being escorted out by security. “The judge is a man’s man! He’s a man’s man! You got this judge, don’t listen to them! He’s a man’s man! Does that look like the face of a molester?” he shouted to the audience, before the comedian was directed to sit back down.

After the church’s pastor reminded protesters that the next disturber would be turned over to the police, Byrd shouted out, “No more sissies!”

After a few more interruptions, security came over to the comedian to escort him out of the building. Byrd protested. “He’s kicking out your number one fan, judge! I believe in the judge. I don’t believe in the ladies who lie. Does that look like the face of someone who hits on teenage girls,” he asked the congregation as he was walking out of the church.

Byrd did a similar act for Kimmel at Donald Trump's inauguration earlier this year.

The prank resulted in a Twitter war between Kimmel and Moore, Wednesday. Moore called out Kimmel for not coming himself to talk “man to man”:

.@jimmykimmel If you want to mock our Christian values, come down here to Alabama and do it man to man. #ALSen https://t.co/E7oQB9D83P

Sounds great Roy - let me know when you get some Christian values and I’ll be there!

Despite D.C. and Hollywood Elites' bigotry towards southerners, Jimmy, we'll save you a seat on the front pew.

Kimmel has rebranded himself this year as an activist for liberal politics, from making emotional pleas for Obamacare, to attacking Republicans over health care and guns, to great praise from the media.