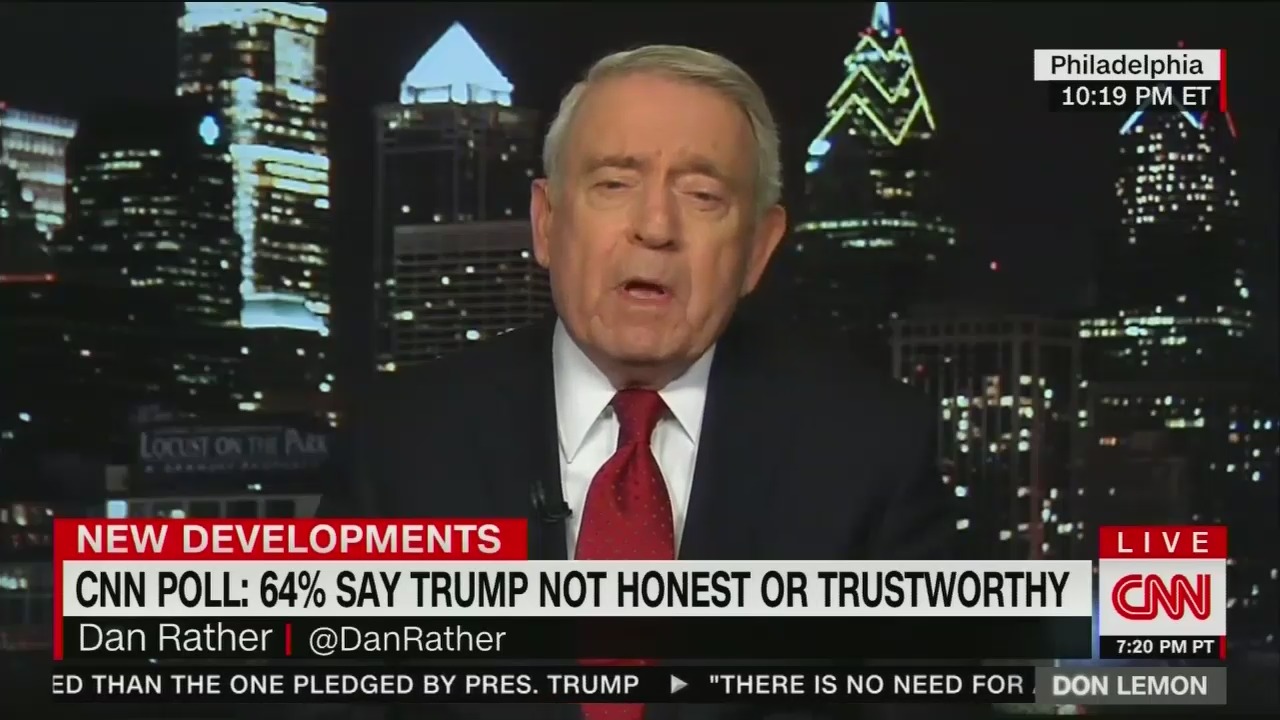 If the media genuinely wants to turn around their reputation for reporting fake news, here’s an idea: Stop turning to disgraced news anchors, fired for essentially lying, as your experts on “truth-telling!” But as per usual Wednesday night, CNN predictably brought on Dan Rather to give his words of wisdom on Tuesday night’s election results.

As is his standby target, Rather blamed Trump for the big Democrat wins, saying voters had rejected Trump’s “divisiveness.” Even better, Rather laughably claimed that in Virginia in particular, the GOP had ran a “very dirty” campaign, while Democrats had run a campaign based on unity.

After talking about the Russia investigation, anchor Don Lemon asked Rather “what happened, in his view” Tuesday night:

“It was supposed to be very tight in Virginia. What happened in your view?” he broached.

Rather gushed the election results were a “big deal,” before making some truly ludicrous claims about how each party ran their campaigns in Virginia.

Well, I think what happened -- first of all, this is a big deal. This was a big win for the Democrats. No other way to read it. They among other things particularly in Virginia, the Republicans found out that running a Trump-ism kind of campaign without Trump himself campaigning directly for you doesn't work. And also this campaign in the end the Republican candidate for governor, thinking he was behind, began to run a very dirty campaign. As I said before, this campaign was nasty enough to gag a buzzard. That didn't work.

As Newsbusters has noted, the Democrats ran an ad through the Latino Victory Fund, that showed a voter for the Republican candidate, Ed Gillespie, running over minority children with his truck. But Rather doesn’t see that as a “dirty” smear campaign(to say the very least)?

I guess it should come as no surprise since Don Lemon’s show actually defended the nasty ad that painted Republicans as racist murderers the morning following the election.

Regardless, the woefully obtuse Rather continued praising Democrats for running “old-fashioned” campaigns, that provided a positive “climate” that “united” the country:

So by any reasonable analysis coming out of last night, good news, very good news for the Democrats in not only Virginia but New Jersey and other places. They did it the old-fashioned way. They really got organized and they got people out to vote…

...But hope and optimism, they only work if people are willing to act. So it's a very old story. What counts the most is the vote. And in this case the Democrats worked hard to get their vote out. They were in a climate I think generally speaking that people want the country to be united.

And then he brought up Trump, because of course Trump is to blame for everything, ignoring the media’s role in causing division with their partisan and sometimes unfactual reporting:

"And much of the rhetoric and the tone coming from the Trump administration has been to divide us. You know, race against race, in some cases religion against religion. And that's contrary to our history and the natural American spirit. And I think that's some of what moved these ballots to go democratic last night. But any reasonable reading of those results, a lot of Republicans who are up for re-election next year, their fingernails will begin to sweat now given these returns,” Rather stated.

He went on to blame Trump some more, saying his lack of “nobility” was “beginning to show at the polls.” (Because voters didn’t know what kind of candidate Trump was until after he was elected?)

DON LEMON: Let me ask you because I'm going to put our poll up. It's a very troubling numbers for President Trump here. Only 34% of Americans say the president is honest and trustworthy. 64% think he is not. One year in, I think that's pretty astonishing. What forces are at work here?

DAN RATHER: Well, you know, general speaking with the Trump administration his problem, and it's a growing problem with the electorate and I think for the country as a whole is the tone of his administration. You know, with some policies you can see well, he's not that far out of the mainstream but it's the whole tone of the presidency that I think what he says, what he tweets. People want a president to be strong, but they want him to be noble or at least have some noble instincts. And these are pretty hard to find with this presidency and it's beginning to tell at the polls.