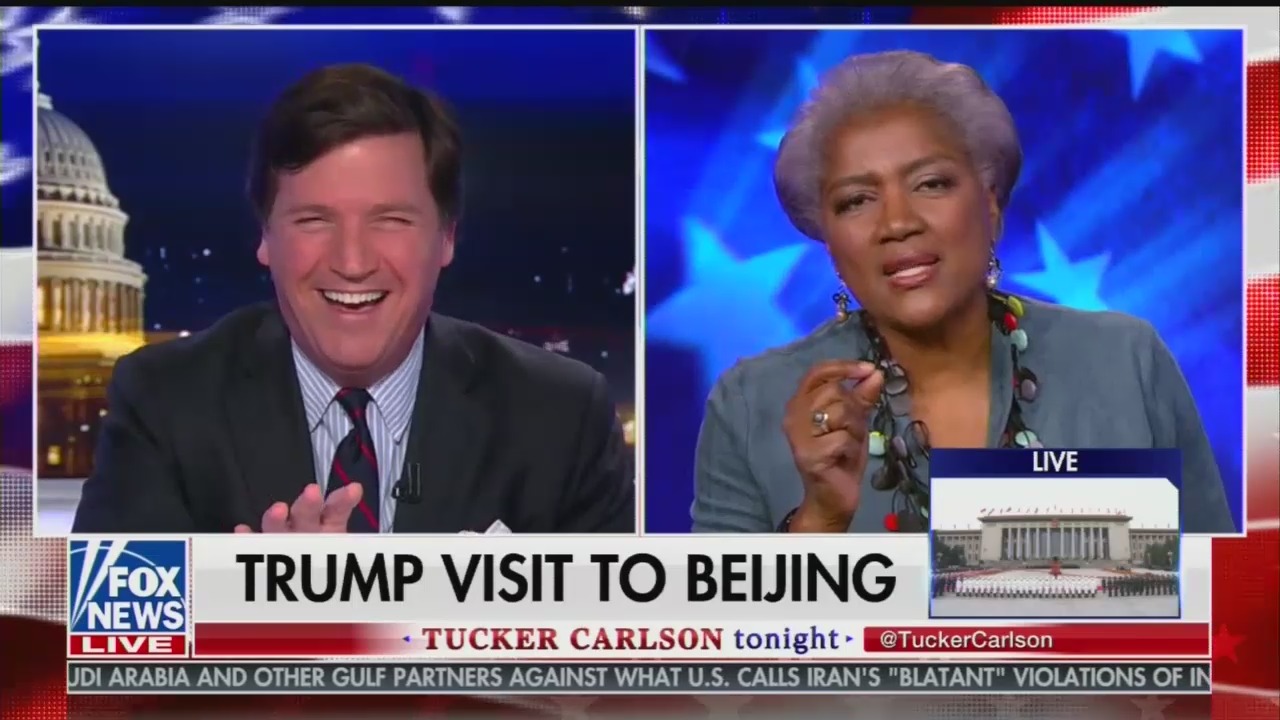 Former DNC Chairwoman Donna Brazile has been on just about every network promoting her new book about the 2016 election, Hacks, and has largely avoided confirming any of the damning allegations she made about Hillary Clinton’s campaign in that book. She dodged and avoided saying negative things about the DNC again on FNC host Tucker Carlson’s show Wednesday night, but the interview took an unexpected turn towards the end, when the conservative talk show host couldn’t contain himself any longer, and burst into laughter at one of Brazile’s nutty deflections.

Despite their polar opposite political views, the interview was friendly and collegial throughout the over 20-minute-back-and-forth conversation. But that changed after Brazile denied giving debate questions to the Clinton campaign, a scandal revealed by Wikileaks that got her fired from her longtime analyst job at CNN. Brazile admitted she had done this, last year on The Daily Show, but after Carlson brought it up, she tried to deny she had done it, saying “Don’t put words in my mouth.” She immediately then began to defend doing so, at which point, Carlson burst into uncontrollable laughter.

Speaking about all of the Democrats who’ve come out against her book this week, the talk show host moved on to ask how it was possible that her previous employer, CNN, had no idea she had provided debate questions to the Clinton campaign.

“[Y]ou conceded that you leaked questions to the Hillary campaign during a CNN town hall, before CNN town hall. My question when I’m reading this is, did no one at CNN know that happened? Did they really learn for the first time when they read your book? How could they not have known that?” Carlson asked.

“Well Tucker, I surely hope now everybody will go out and buy the book. It's called Hacked, the Inside Story,” Brazile plugged her book.

Carlson laughed and asked again, “Did nobody at CNN know that you did that? You say, look, apparently got them from--,” he started to say.

Still chuckling, Brazile denied she admitted that she had leaked debate questions. “No Tucker, you cannot put words in my mouth,” she began to say.

“No, no I’m just asking,” the FNC host reiterated.

“I know I got some lipstick from Fox, but that does not force me to not stand my ground. I said in the book--” she began to defend herself before Carlson interrupted to clarify his question.

“But it’s not your ground, I’m asking about CNN, where you then worked. You haven't gone on their air, they are mad at you, obviously. Did they know that you leaked these questions, really simple question?” he stated again. “Sounds like you did,” he added.

Shaking her head, Brazile again denied ever admitting that, but then goes on to admit she did exactly that, saying she didn’t “want our candidates blindsided” by questions they weren’t prepared for:

No Tucker, don't try to put words in my mouth. I said last year that CNN never provided us with any questions. CNN never gave us anything in advance. What I did say, what I have set in the past, and what I say in this book is that as an officer of the DNC -- and I know Wikileaks gave everybody certain questions in certain emails, but as an officer of the DNC, I sought to expand the number of debates, and I wanted to make sure that we had diverse voices, and we covered issues that had not been discussed in previous debates, and what I did -- give me one more second, I know it's your show, I'm not trying to take over. What I saw -- Tucker, I know you too well. What I sought to do was to ensure that we had these issues on the table, and I made sure that our candidates-- I didn’t want our candidates blindsided. That's what I admitted to.

At this point, the talk show host interrupted Brazile’s ludicrous spiel with uncontrollable laughter. “That’s the greatest spin I’ve ever heard!” he chuckled.

“That so good! You should do this for a living! That is hilarious,” the amused talk show host grinned.

Clearly not amused by that reaction, Brazile tried to regain control of the conversation.

“Tucker. Wait. Wikileaks -- Wikileaks sought to divide us,” she began but Carlson was still cracking up over Brazile’s answer to the last question.

“I can’t---’blindsided’” he repeated Brazile’s words, chuckling. She continued:

He laughed and responded, “You know what? I'm totally happy, you bring those and I will put them on the show, anytime,” he said, moving on to ask Brazile about her Democratic detractors, again.