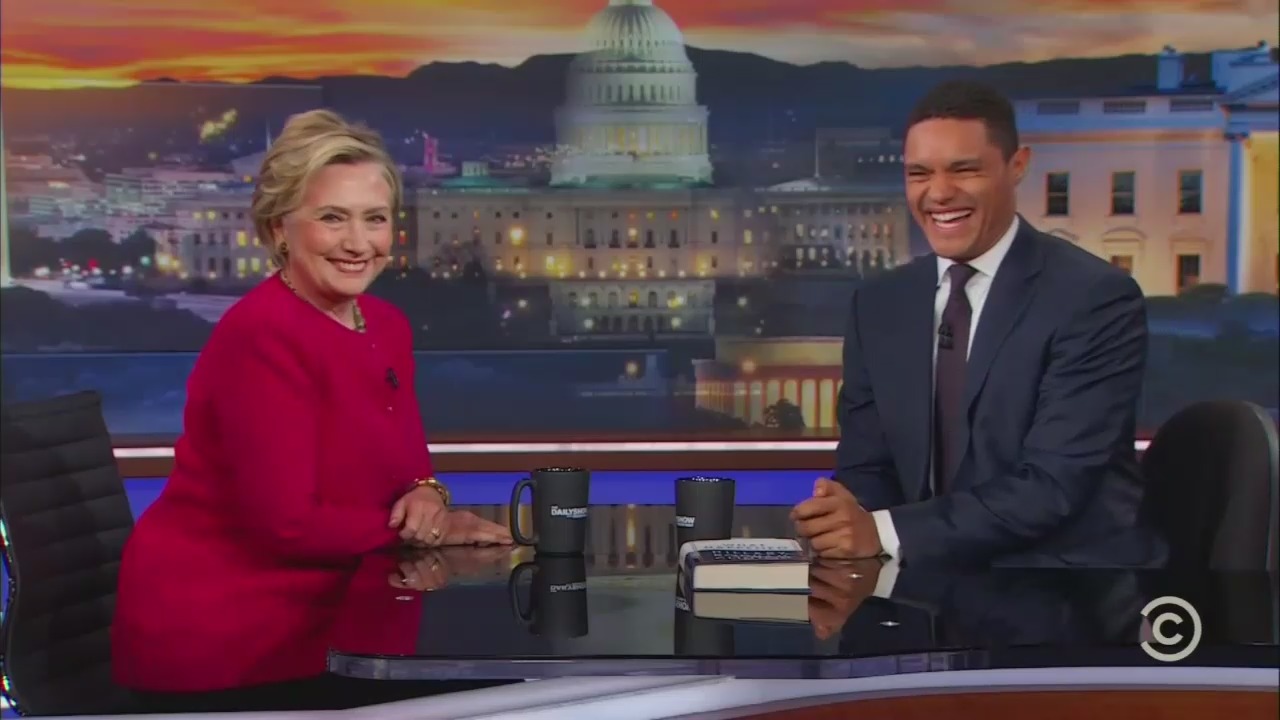 Failed Democratic presidential candidate Hillary Clinton is still making television appearances, trying to explain to the dumbfounded media nearly a year later “what happened” when she lost the election last November. She sat down for a cozy interview on Comedy Central’s The Daily Show Wednesday night, that didn’t offer any hard questions or surprises. Host Trevor Noah phrased every question from a liberal viewpoint and sympathized with Clinton repeatedly over the misogyny and media bias that, she claimed, helped Donald Trump win the election.

Noah welcomed Clinton on the show with a series of clips of right-wing reporters and commentators misspeaking, calling Clinton “President Clinton.”

“How does it feel, knowing that in one world, you won?” Noah posed to Clinton, grinning.

She laughed and said, “I can only say, if they want to make that world a reality, I’m still ready.” The audience roared with cheers and approval as the pair chuckled. That friendly atmosphere followed through the rest of the show.

“Jokes aside, I know there are a lot of people who wish you were president, especially on a day like today, especially on a day like yesterday, an attack happens in New York,” Noah gushed. From there, Noah gave Clinton an easy opportunity to bash President Trump, asking about his rhetoric and how she would’ve reacted differently to the terror attack, had she been president.

After Clinton blasted Trump for not having “any empathy,” Noah brought up the Clinton dossier, but framed it in a completely one-sided way:

“Of course, there is. And, you know, I think most serious people understand that,” she began, dismissing those who associate the two as stupid. Clinton called the dossier simply “opposition research” that was vetted for “accuracy” before it was released to the public. As if that wasn’t ridiculous enough, she claimed the FBI investigation into Trump was underreported and would’ve swayed the election.

After a commercial break, Noah went back to giving Clinton softballs as ways to beat up on Trump:

“Does it feel frustrating sometimes, as somebody who has always been in the service of people in this country, seeing somebody like Donald Trump working to dismantle everything? At some point, to be honest, it feels spiteful,” the late night host sympathized.

Clinton agreed, adding hyperbolically to finish off her long-winded answer, “Yes, he’s going to try to undo, I'm afraid, much of the 20th century at the rate we're going here, and we can't let that happen.”

Noah moved on to bemoan the election results some more, this time blaming the “undeniable” misogyny in the 2016 election. He brought up Harvey Weinstein, without acknowledging he was a Clinton donor, before he gushed that Clinton experienced that kind of mistreatment “1,000-fold more than anyone:”

This is something people want to fight and it's hard to deny, but there was a big part of this that had to to do with misogyny. I'm not trying to say everyone who voted against you voted against you because they didn’t like you were a woman. But when you look at misogyny and you write about it in the book, and sexism, it does feel like, since the election, there has been a backlash. And I'm referring, obviously, like, to the Harvey Weinstein scandal, and what's happened, people in Congress even speak out now. Do you see a positive shift in a direction we need to be going in? How do you see the landscape as it stands, as really someone who experienced I think 1,000-fold more than anyone?

“I am cautiously optimistic, because as I write in the book, sexism and misogyny are endemic in our society, not just in our politics. We've seen lots of stories out of Silicon Valley, out of the media. We know that, it, unfortunately, is pervasive,” Clinton said before explaining she was working to get women more involved in politics and running for office.

Still harping on the sexism beat, Noah asked Clinton how it made her “feel” when people tell her to “go away” and leave the political sphere. She sighed as the audience loudly chanted, “No! Stay!”

“This is what people say. I honestly have my own views, and I relate it to my mom and things people have said to her,” Noah empathized.

“But when you hear that, like I say, I have my idea on where it comes from. How do you feel and what does it make you want to do?” he asked.

“Write a book explaining what happened and come on your show and other places!” Clinton gushed.

She continued, claiming that no other failed male presidential candidate received this kind of treatment:

You know, some of it is just rank sexism. Let's just be honest about it. I never heard anybody say that to Al Gore or John Kerry or John McCain or Mitt Romney, all the men who lost elections in the last 17, 18 years. Some of it is just that.

Continuing the year-long blame-game, she went on to blame the media for their allegedly unfair coverage of her campaign:

Some of it, I will say, is media guilt. You know, when they now have to face the way they covered this campaign, and the fact that they didn't pay any attention to policies-- which, you know, I thought would be important and spent a lot of time saying, "Okay, here's what we're going to do on an infrastructure plan, what we're going to do to improve the affordable care act, and everything I worked on." They were so totally entranced by the reality TV element of it, and the entertainment value of it, that I'm told-- and some members of the press have privately said to me-- look, they missed it. They missed it. They thought I was going to win so they could beat up on me without consequence, and they didn't really stand up against a lot of the ridiculous lies and accusations against me. So I think there's that.

Clinton wrapped up by reassuring Noah and her audience of supporters that she wasn’t going anywhere:

“I'm going to keep talking. I’m not going anywhere. I walked in the woods. That was enough. I’m done with that,” she said enthusiastically.

As the audience cheered, Noah cracked up and reached across the table to fist bump Clinton, wrapping up the gag-worthy interview.