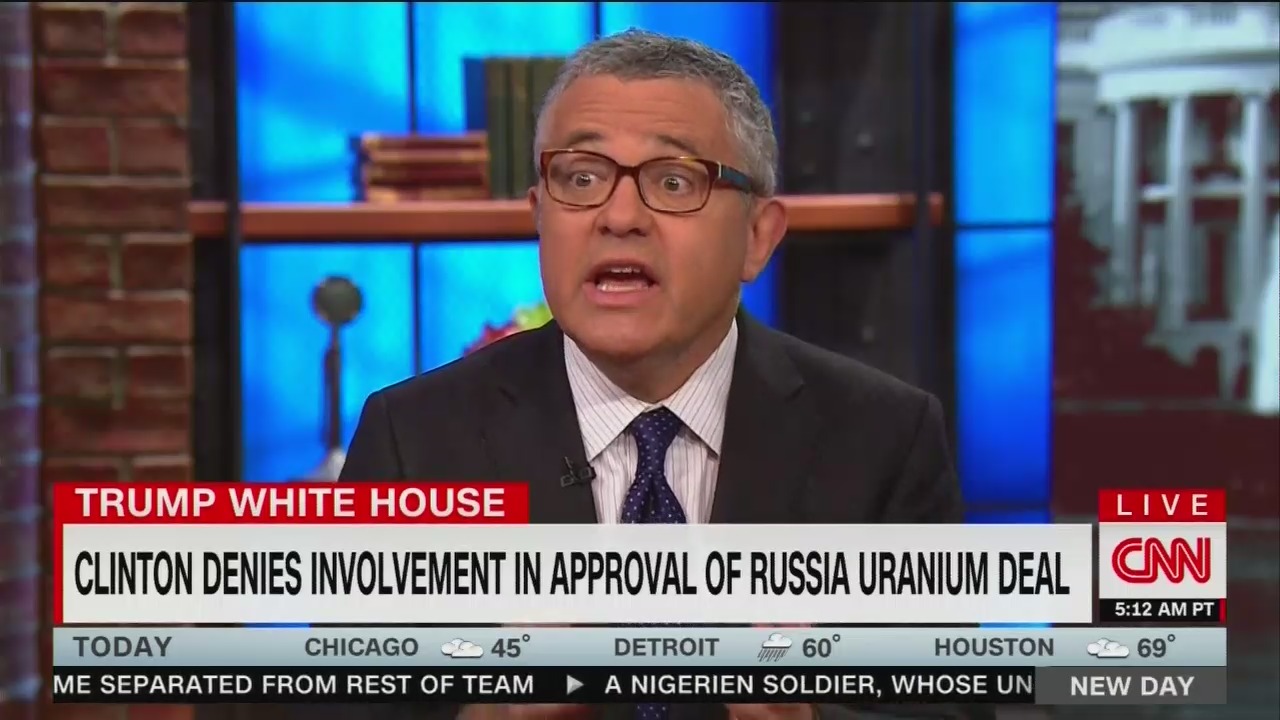 Even though the media has been largely ignoring the shocking new details uncovered by The Hill last week, on the Uranium One deal, the panel flipped the blame, accusing the right of bringing up the “discredited” story simply to distract from Mueller’s investigation into Trump’s ties with Russia. Like the network has been doing all week, they framed the new report as a conspiracy theory invented by conservatives simply “to criticize Hillary Clinton.”

“There's an incredible double standard from the White House and Kellyanne Conway on a range of issues when it has to do with the Russian investigation,” Berman declared, to start off the discussion on CNN’s New Day, 8am PST Friday.

“Anything that the Clinton camp did with opposition research, oh, that matters a lot. She says the Clinton campaign shouldn’t be reaching out to a foreign agent. But when Donald Trump Jr. is having a meeting with people, promising dirt from Russia, that's not a problem, that's opposition research. Really interesting double standard,” Berman began.

Dana Bash acknowledged Conway was trying to “flip” the media’s script in talking about Russia, putting the focus back on Democrats. But Jeffrey Toobin addressed The Hill report, dismissing it as an old, discredited story:

TOOBIN: Remember, this whole uranium thing comes from Fox News. This is a closed investigation that came up in Peter Schweizer’s book, Clinton Cash in 2015, it was discredited then--

TOOBIN: The book came out in 2015. It was one of the accusations. It has been discredited. Two years later, Fox News and Republicans in Congress and Republicans in the White House start raising it simply as a way to wave Russia back at the Democrats. There's nothing, no new information here. You have the President of the United States, apparently, according to CNN reporting intervening with the Justice Department saying get us more witnesses on this. This is precisely why in the post-Nixon era there were rules in place to get the White House out of criminal investigations. They are not supposed to be involved in making those sorts of decisions. This White House is changing the rules.

Bash added that Democrats had no problem with addressing the new information in the Hill’s report, revealing an FBI informant who had more information.

“I spoke to Democrats on the committee that said if there's a new piece of information, let's hear it. If this FBI informant/whistleblower wants to talk about something, let's hear it. But that doesn't mean that this is where this story is,” she said.

“Is Russia bad or good? Let’s pick a side,” Camerota said. If they are helpful and real world partners in solving world peace as President Trump has said, then, why are we so exercised about the Uranium One in the White House? Pick a side!” she gushed.

“Because it's a chance to criticize Hillary Clinton,” Toobin snarked.

“It's a chance to criticize Hillary Clinton,” Bash agreed. “The people who are kind of obsessed with this don't want to believe that there wasn’t pay for play, because that’s what this is all about,” she added.

“[R]egardless, let's just take a step back and look at the politics. Republicans are trying to get their sea legs here. They have been -- from the perspective of a lot of conservatives, letting the Democrats run the show on the Russia investigation, and that's why you see Fox and other conservative outlets saying C’mon guys, we have some quivers here that we could start to shoot and let's start doing it,” Bash stated.

Toobin again tried to brush the story under the rug as a conspiracy theory:

TOOBIN: I do think the merits are important on this whole uranium deal. The whole hypothesis is that Hillary Clinton rewarded this donor to the Clinton Foundation by giving this contract. First of all, there were nine agencies involved, and he had sold his interests in the company by the time the contract was awarded. So the idea that there was pay for play here is not credible.

BASH: We will see. If the Republicans can't get anything more than what you just said out of this informant, then they just closed their own case.

TOOBIN: But they got us talking about it, which is a victory.