Former Clinton Spox Claims Russia Only Helped ‘One Side’ During Campaign; No Pushback from CNN 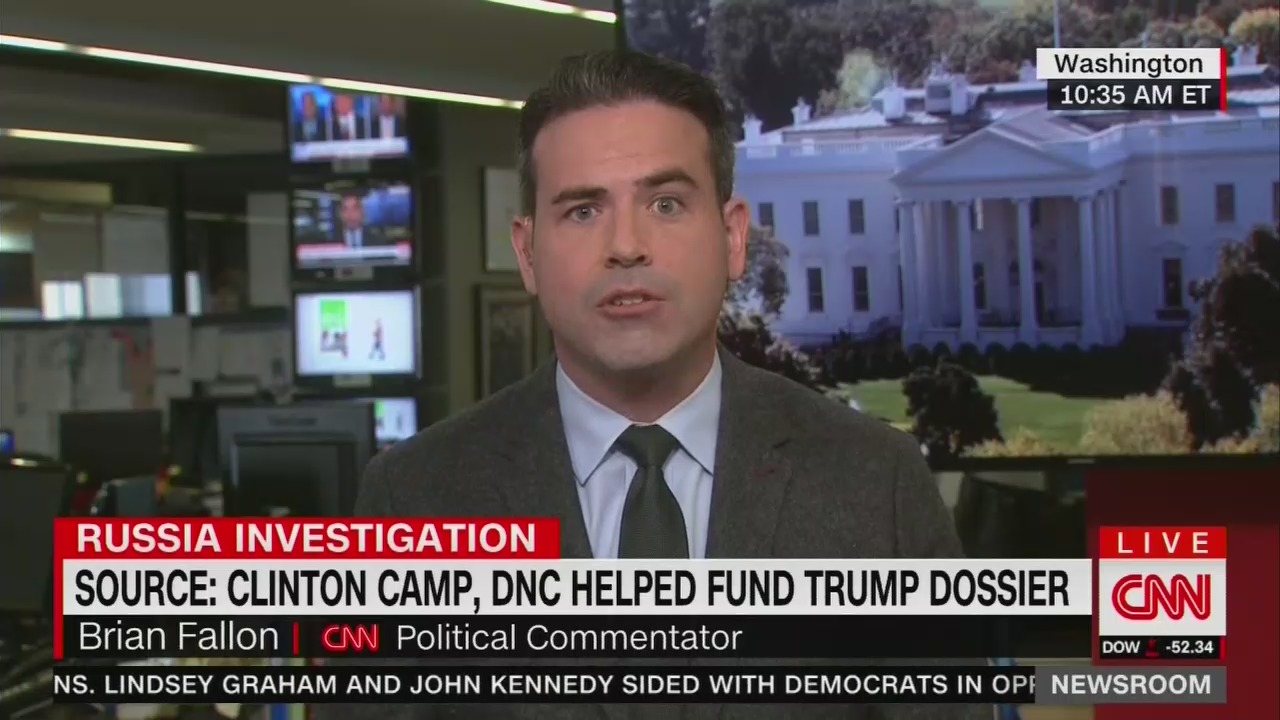 Former Clinton campaign spokesman and current CNN contributor Brian Fallon has been making his rounds on the networks, cable news, as well as social media, defending the Clinton campaign’s actions funding “opposition research” against Donald Trump by the Russians in 2016. The Washington Post broke the story Tuesday night that the Clinton campaign paid for the infamous and unsubstantiated Trump-Russia dossier, that the media drooled over early this year.

After being touted by the media all morning, Fallon appeared on CNN Newsroom to give more pro-Clinton spin, with no real pushback from the CNN hosts John Berman and Poppy Harlow over his false claims.

After the news broke last night, Fallon went on a tweetstorm, frenziedly defending the unsubstantiated Russian dossier that Clinton paid for, deflecting from the fact that his team colluded with the Russians for opposition research-- something Clinton, the Democrats and the media have been loudly complaining about Trump from the beginning. Particularly after Don Jr.’s meeting with a Russian lawyer during the campaign came to light.

On CNN Newsroom Wednesday, Fallon denied there was any equivalency between the two scenarios. His reason? Because “the Russians and Vladimir Putin were only trying to help one side in this election,” he claimed:

BERMAN: We may find out that Christopher Steele wasn't brought on until after the Democrats and Hillary Clinton started funding it. But again Fusion was involved there. But you say this is all in the name of opposition research. That's what Donald Trump Jr. and President Trump said when they were being criticized for Donald Jr.'s meeting with these Russians when he was promised dirt on Hillary Clinton. Are they analogous?

FALLON: No. For a very simple reason. The Russians and Vladimir Putin were only trying to help one side in this election. And you don't have to take my word for it on that. That is the conclusion of U.S. Intelligence. That it was the position of Vladimir Putin and the Russian government that they wanted to help Donald Trump. And we know for a fact that Russian agents committed crimes in service of that goal. They hacked into the DNC, they hacked the John Podesta's e-mails. They tried to hack into voter rolls in different states. So the fact of Don Jr.'s meeting in June, the reason why that's so interesting and potentially problematic, because it suggests that perhaps the Trump campaign had foreknowledge or gave guidance to the Russians about some of those criminal acts. Nothing here that took place with respect to the hiring of Fusion GPS, which is an independent private research firm that campaigns contract with all the time, nothing rises to the level of Donald Trump taking a meet with an authorized representative of the Russian government for the purposes of trying to help Donald Trump's campaign by way of illegal acts.

But Brian Fallon, in July, to our colleague, Anderson Cooper, you said, quote, "There's a difference between going out and hiring opposition firms that work in the United States of America and going on and soliciting information from a foreign national." Christopher Steele, who compiled this dossier, was a foreign national. British.

But Fallon didn’t drift from his narrative, avoiding the easy comparison to the Clintons. Instead he absurdly praised the British spy who took over the opposition research as “honest and trustworthy:”

So Christopher Steele's actions here, this is akin to counterintelligence work. And in fact, after the campaign -- long after the campaign ended, long after the Clinton campaign was paying Fusion GPS any longer, apparently, the FBI itself reached out to Christopher Steele and said, hey, we consider you so trustworthy and your methods so honest, we want to contract with you now to keep doing this research. And then once Christopher Steele's cover was blown and his identity became public, I guess that went south and they no longer went forward with contracting him. But he was very well-known to U.S. Intelligence.

Fallon goes on to dismiss any collusion with Russians by the Clinton campaign, conveniently ignoring the simple fact that this was collusion on its face. He hoped that Bob Mueller would continue “trying to find” that connection between Russia and Trump:

FALLON: He was not being handed things by the Russians. Otherwise we would probably know the details of these supposed videotapes and the business connections that Donald Trump has with Russia. None of that stuff was out there prior to the election. In fact, if you remember, John and Poppy, "The New York Times" in late October wrote a whole story basically acquitting Donald Trump on all of this, suggesting that there was nothing to any of these allegations about connections with the Russians. I tend to think if the Russians were actually trying to help Christopher Steele and collude with the Clinton campaign, more of that stuff would have surfaced prior to November 8th. Instead, we're still digging and Bob Mueller is still trying to find it.

BERMAN: The Mueller investigation goes on. And Brian, we should note, that the intelligence committee has made clear that they have corroborated some of what is inside the dossier, independent of who paid for it. Nevertheless, we do appreciate you coming on and answering these questions, helping us clear up some of these matters. Brian Fallon, thanks so much.

Neither Berman or Harlow took issue with Fallon’s false claim that Russia was trying to get Trump to win the election. Even the liberal media has conceded that Russia put Facebook ads targeting all sides, from pro-Black Lives Matter ads to gay rights ads to religious ads to even pro-Clinton ads. The main intent was to sow division, with ads that appealed to certain demographics and other ads that demonized these same groups. Russian operatives only paid for $100,000 in Facebook ads, a paltry percentage of the ads that were purchased on the social media site during the 2016 election. Additionally, Fallon’s claim that Russia “hacked” into John Podesta’s e-mails and the DNC is not entirely accurate. Podesta opened his e-mails to foreign agents by clicking on a phishing e-mail, which is not the same as hackers breaking into a private e-mail server.

Fallon’s exaggerations and misinformation wasn’t corrected by the CNN anchors, who let the pro-Clinton spin remain unchallenged, as they did all day Wednesday on the network.