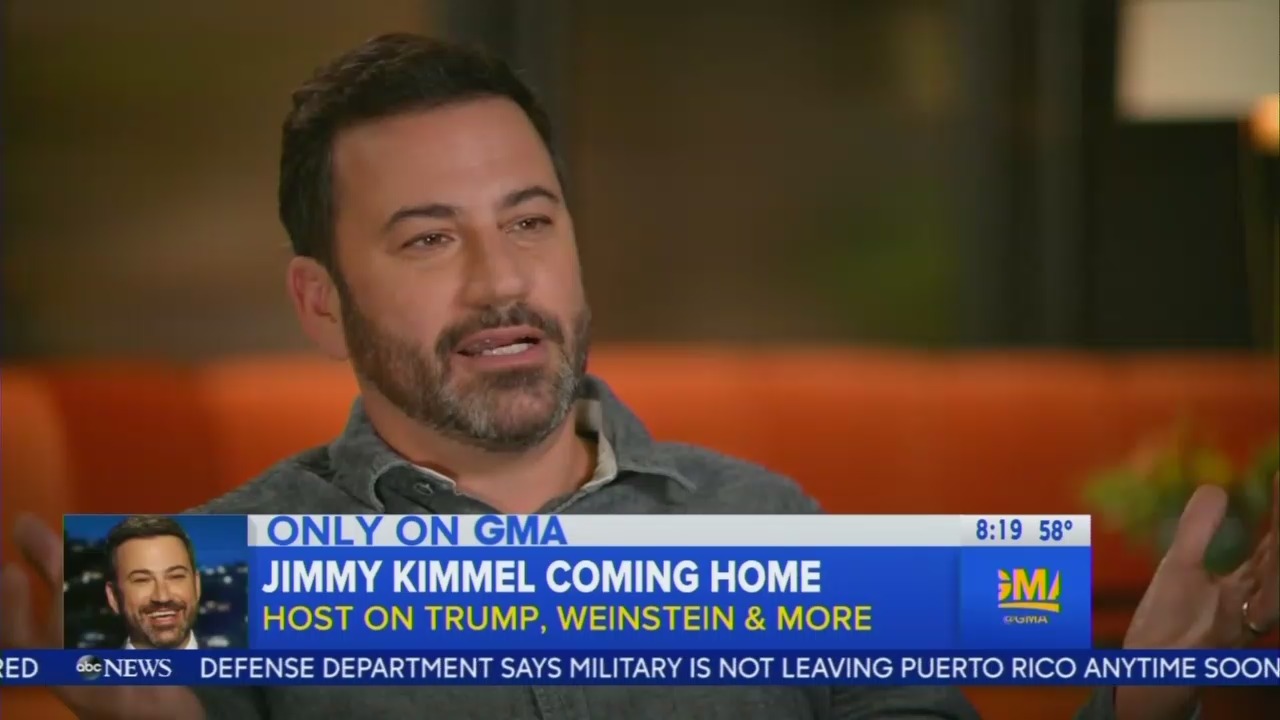 Robach began her exclusive interview with Kimmel by talking about how he would be bringing his show to Brooklyn, his birthplace, the following week, before moving on to fawn over Kimmel’s activism.

“Jimmy and his show has been making news the last few months not just for jokes or skits but for calling attention to the news of the day...in a very personal way,” she noted.

“Was there a moment when you decided I’m now going to take something very personal and try to change the mood of not only America but our lawmakers?”

Kimmel replied that he hadn’t talked to anyone but his wife about his first health care monologue, but he knew he “had to say something.”

ROBACH: Is a New York show next week. Any chance you could get President Trump there?

KIMMEL: I would guess that he's not planning to visit me any time soon. I think he and Sean Hannity have date night on those nights so it's tough to break away.

ROBACH: Would you like to have Donald Trump on your show?

KIMMEL: Absolutely. I have a lot of questions for Donald Trump.

ROBACH: What would be your first one.

KIMMEL: I really -- maybe this is crazy but I feel like I could turn him around on a couple of things.

ROBACH: This after going toe-to-toe with Trump’s son, Donald Jr. this week. He was calling you out along with other liberal Hollywood elite saying that people were late in the game to talk about --

KIMMEL: He's an idiot. Let's just start with that. This is an imbecile that is -- whose job seems to be tweeting as far as I can tell. But with that said, I do admire that he's very loyal to his father.

Kimmel went on to blast his online critics as “gun nuts” and defended himself for not talking about Harvey Weinstein until his Monday show. He claimed that he was a stranger to Weinstein and explained that his show didn’t even air on Friday so he couldn’t say anything till Monday, (which still doesn’t explain his silence on Twitter):

KIMMEL: First of all, the Harvey Weinstein thing, people like this false equivalence of that’s somehow’s equivalent to what happened in Las Vegas. I mean, Harvey Weinstein is not a person -- is not a friend of mine. I'm not in the movie business. And I'll add that that story came out like I think moments before we went to tape on Thursday and we didn't have a show on Friday so --

ROBACH: You addressed it on the following Monday.

KIMMEL: So, you know,of course, that was it's a convenient -- now what they're doing now is they're trying to drag up any kind of -- especially these gun nuts trying to drag any -- like take any comedy bit I did out of context and use it as some kind of proof. They're saying that I'm calling myself the moral conscience of America which I most certainly never did and most certainly never would.

Though Kimmel shirks off the label, many media outlets, including CNN, described Kimmel as such and this is the first time he’s said he doesn’t agree with that. Moreover, Kimmel’s moral grandstanding on his show and Twitter account, directly going after conservatives and the Trump White House, prove that his actions don’t exactly reject that moniker.

Wrapping up the interview, Robach told the rest of the GMA crew that Kimmel wasn’t done with his moral lecturing on his comedy show. She gushed that his Twitter feed seemed to suggest he may even run for president, which sounded great to Robach and the rest of the GMA hosts:

ROBACH: And Kimmel told me he is going to continue to take on serious topics including health care. Overnight he tweeted about the health care news, Trump ending Obamacare payments that subsidize insurance for millions of poor Americans, Kimmel saying, ‘wait, he said I’m going to take care of everybody. Everybody's going to be taken care of much better than they’re taken care of now, something Trump said in an interview back in 2015 and also as I was interviewing Jimmy, I noticed on his Twitter feed, his bio says ‘ready to serve.’ I asked him if he was serious. Could we see ever see a President Kimmel? He said, 'Believe me, nobody wants to see that.'

“Most of all Jimmy,” anchor George Stephanopoulos joked.

“He doesn’t take himself too seriously but he knows he has a platform,” Robach gushed.

“And has used it well!” Stephanopoulos added, to the rest of the hosts’ agreement.