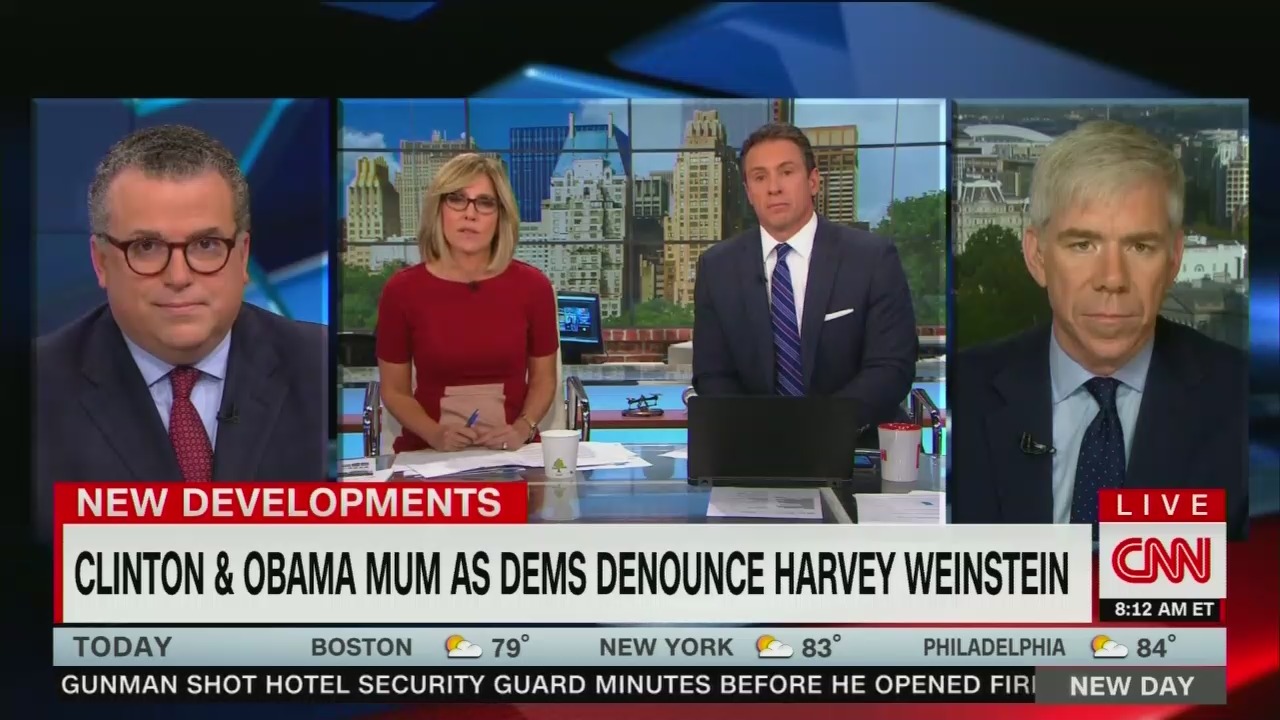 Camerota asked her guests if there was a “double standard” for Democrats, when one of their own was caught up in these types of scandals, while their analyst guests said Clinton and Obama had “situational ethics.”

Starting off the first hour of New Day, Camerota asked her guest, Real Clear Politics associate editor A.B. Stoddard, if there was a “double standard” for Democrats “not coming out and condemning this” behavior from Weinstein. She noted that Clinton gave a lengthy speech the night before without one mention of the major Democrat donor, who had given money to her own campaign. Stoddard noted that President Obama also benefitted from Weinstein’s contributions, so it was “time” for both to “man up” and speak out:

ALISYN CAMEROTA: Harvey Weinstein has been ousted after a series of really disgusting sexual harassment and just sexual -- I mean, it's beyond sexual harassment, some of the things that he is accused of. But do you think there's a double standard in terms of Democrats not coming out and condemning this? In fact, Hillary Clinton gave a 90-minute-speech last night in California, didn’t mention it.

A.B. STODDARD: Absolutely there’s a double standard. I don’t care whether she ever weighed in on Roger Ailes or anyone else, she is a public person, she has benefited from his support in the past. She needs to talk about whether, you know, corporate culture permits this kind of complicity where they cover up for each other. Let alone how the women have been treated and what they’ve suffered. This is not one incident, it went on for decades. And I think it's time for her to man up and President Obama as well. And people who have really enjoyed his support through the years.

As she was speaking, CNN’s graphics team put up photos of Ivanka Trump and Jared Kushner smiling with Weinstein. Anchors Chris Cuomo and Alisyn Camerota chuckled and joked that they were not insinuating that Weinstein was friends with the current White House. “He is a huge Democrat. This is not about him pawning up to the White House,” Cuomo said. Camerota added, “He’s given millions to Democrats and bundles for Democrats.”

Political commentator Chris Cillizza noted that Weinstein was a major figure in both candidate’s campaigns, and that it was “amazing” that neither one had spoken out against Weinstein yet:

He has held fund-raisers, he held multiple fundraisers for Barack Obama's campaign, not just donating money but raising money. He held fundraisers for Hillary Clinton's campaign. Yes, he is a person who gets his photograph made because he is famous with other famous people including, yes, Donald Trump, yes Ivanka Trump, yes Jared Kushner, thank you my Twitter followers for being sure to send me that picture of Donald Trump and Harvey Weinstein 10 million times. The broader point is that this guy is a Democrat, he is a very high-profile Democrat, fund-raiser and bundler of money and I just think it's amazing that you don't see Hillary Clinton and Barack Obama who frankly are still the two highest profile Democrats in the country not say this is unacceptable behavior.

After Camerota asked Cillizza why, Cillizza noted it might be “situational ethics,” which Cuomo roundly condemned:

CAMEROTA: Why is that, Chris? Because it's not the easiest thing to say, to come out and condemn this? Why are they not doing it?

CUOMO: That's a phrase but there is no thing such as situational ethics.

CILLIZZA: There shouldn't be but there is.

CAMEROTA: All sorts of people are giving it to charity. That sounds like the right answer. But we haven’t heard that yet from other high profile Democrats.

CUOMO: All sorts but not that many.

Cillizza agreed that it would be good for Democrats to give back their donations, but the bigger issue was that neither of the Clintons nor our former president were saying anything about one of the biggest stories this week:

But again Alisyn, I think it’s important to remember: It's good if Dick Blumenthal from Connecticut gives back the $5500 dollars or whatever Weinstein gave him but you're talking about Bill Clinton, Hillary Clinton, Barack Obama, the three biggest names in Democratic politics for the past fifteen years, twenty years, not saying anything about -- forget money, donations and bundling. But not saying anything about this story, forget money and donations and bundling-- but not saying anything about this story, which is, you know, inarguably one of the five biggest stories in the country. You could argue it’s the biggest, but certainly one of the bigger stories in the country. Nothing? Not a statement, not one sentence saying “I condemn this behavior.” Of course they do. The point is when you're a public figure you need to be on record on these things.

Even Cuomo noted the discrepancy between their public criticism of President Trump but their silence over Weinstein:

Especially if you want moral high ground. That's been such a big pushback against the President of the united States. You have to own it and you have to do it when it's not convenient as well as when it is playing to advantage.

Later, in the 7am hour, Camerota sat down with Senator Tim Kaine and asked him about his former running mate’s silence over the Weinstein allegations, and whether they should give back their campaign donations:

He gave $35,000 to yours and Hillary Clinton's 2016 election effort. Should that money be given back?

Kaine explained the money had already been spent during the campaign, but said Clinton should “call out” the “bad behavior” from Weinstein.

“But you would recommend that she do that?” Camerota pressed Kaine for a more direct rebuke. He replied, “Any leader should condemn this.”

Camerota brought up that part of the interview during the 8:00 hour, asking CNN’s Political Director David Chalian if it was “too dangerous a territory” for Clinton to speak about, considering her husband’s history with sexual assault:

Chalian dismissed that argument, saying he didn’t “understand” that perspective at all.

She explained that Clinton could be getting into “dicey territory” by condemning Weinstein, when she wouldn’t defend the victims of her own husband:

Well because her husband was accused of things and it gets into very dicey territory for her to condemn it so strongly against Harvey Weinstein and then people say why didn’t you ever speak out for the victims of Bill Clinton. You heard this story in the campaign!

Chalian again dismissed this notion, saying Clinton had spoken out against domestic violence for years:

“I don't think it's complicated for her to come out and condemn someone who gave her political donations, simply for that fact alone,” he pressed.

“So why is she not doing it?” Camerota asked.

“I don't know the answer to that,” Chalian replied. But he argued, she should be speaking out anyway, along with Barack Obama, who also received donations from Weinstein:

Barack Obama, also, this is just unconscionable to me, that people with huge megaphones, and even more important because they did receive his donations and have been patronized by him, do not come out and speak out against this.

Cuomo echoed Chris Cillizza’s earlier take, that they were silent on Weinstein because it was easier to criticize people outside your party:

Isn't that the answer? You don't criticize people who you are close to the way you do with people you are not close to. Let's be honest. This has been quiet, this story. There's another layer to it. “Oh well, we didn't really know.” No, we keep hearing well, everybody knew, everybody knew. That's their problem. If everybody knew and you delayed saying anything when it wound up being public, what is your defense?

CNN political analyst David Gregory, agreed there was no defense for Clinton and Obama not speaking out, saying that anyone who knew about Weinstein’s behavior before was a hypocrite now:

“You are at least a hypocrite if you are going to really step out and speak about people who are in the middle of all of this,” he noted, after both Democrat politicians had come out strongly against presidential candidate Donald Trump after the 2005 Access Hollywood tape was leaked in 2016.