‘You Don’t Have to Do Anything to Get a Gun’ Legally In ‘Certain’ States, ‘View’ Host Claims 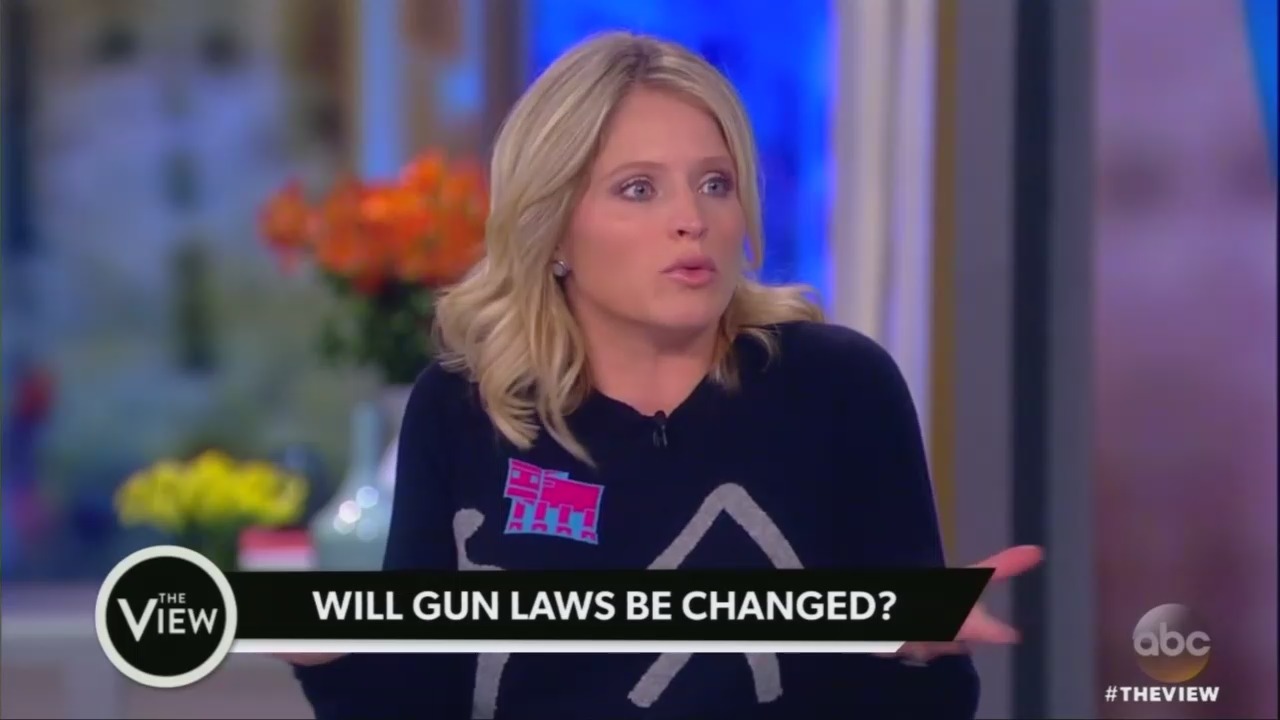 After Monday’s show was interrupted with live news coverage, ABC’s The View got its first chance to respond to Sunday night’s mass shooting on Tuesday’s program. As to be expected, the dialogue was high on emotions and low on facts, with the hosts reciting Democrat talking points, praising Jimmy Kimmel’s late-night rant, and urging viewers to vote Republicans out of office for not doing enough to stand up against “the gun lobby.”

Host and ABC legal analyst Sunny Hostin raved that the Constitution was supposed to “protect” Americans from gun violence, while co-host Sara Haines claimed that getting a gun legally in some states required practically no effort or knowledge of how to use the gun safely.

The show began with the hosts lamenting Republicans were being funded by the NRA, so nothing would change. Co-host and legal mind Sunny Hostin complained that American citizens had decided these shootings were “bearable” instead of voting these congressmen out of office. She then claimed that the Constitution was supposed to “protect” us from violent lunatics:

“The price of freedom, people in Canada live with just as much freedom as we do and yet they have zero practically gun violence like this,” host Joy Behar claimed.

Fellow host Whoopi Goldberg then wondered why this massacre hadn’t been called domestic terrorism yet, and suggested it was for racial reasons:

“It’s a rich white guy,” Behar played into the race-baiting. “It’s a whole other world now to deal with,” she added. Behar then fretted that the news cycle would shift back to everyday news right away, with no action by Congress:

We are going to stop talking about this in a week and they have on their desk, Congress has on their desk the idea that they should allow silencers now on guns because of hunters' hearing issues. Ok? So this guy who was shooting down had a silencer, what would have happened? No one would have known what was going on. They would have just been falling all over the place.

Thankfully Whoopi and Sara Haines corrected Behar, explaining that that the shots still would’ve been seen by the flashes of light and the smoke detector going off in the room.

After commercial break, host Sunny Hostin feared nothing would change, saying the Republicans’ “wake up call” didn’t happen “after twenty six-year-olds were murdered.” She then struggled with her words slightly, seemingly suggesting that the 20,000+ in attendance that night were “fellow” Republicans, before Whoopi smoothed things over:

“Americans,” Hostin added. “I just don’t think it will ever change anything,” she worried.

After Haines stated that her father was a gun owner and Whoopi admitted she was as well, Haines acknowledged that gun owners were afraid of their guns getting taken away. “But I think the things that people could get on board with, are limited magazines--how much ammunition is fired at one time--”

“How about if you have more than 3 guns somebody says, ‘Hey!’, a flag is raised?” Whoopi suggested.

“Silencers and these ammo added things, I think everyone could get on board. I don’t think we need these,” she added.

Behar then brought up two gun laws being reviewed before Congress, one about silencers and the other about permits to carry concealed weapons across state lines. She worried about states like California and New York, “which have strict gun laws” would be affected by guns brought over from other states with looser regulations. “So now they can just bring their guns into our state. No!” she exclaimed.

Hostin then ranted against White House Press Secretary Sarah Huckabee Sanders for calling off discussion about gun control, the day after the tragedy. “It’s too late to talk about guns now actually, Sarah Sanders! We should be talking about it every single day,” Hostin forcefully argued.

“If you’re a law-abiding citizen, you shouldn’t have a problem with regulating, with licenses,” she argued.

“The shooter was a law-abiding citizen!” Behar noted. “He doesn’t have a record,” she added.

“Yeah, but it can stand to stop some, if it stops even one,” Haines stated.

Whoopi then seemed to suggest that someone stockpiling dozens of guns would alert the authorities (?) that they were doing so:

“You can let someone know that you have 47 guns in your possession. It can raise a flag, and I don’t mind that,” she added.

The hosts ended the segment by thanking ABC late night host Jimmy Kimmel for pointing out all the Senators who voted against gun control laws recently.

“Don’t vote for them!” Behar pleaded.

“Call their office and ask them why...connect to them and find out why,” Whoopi urged.