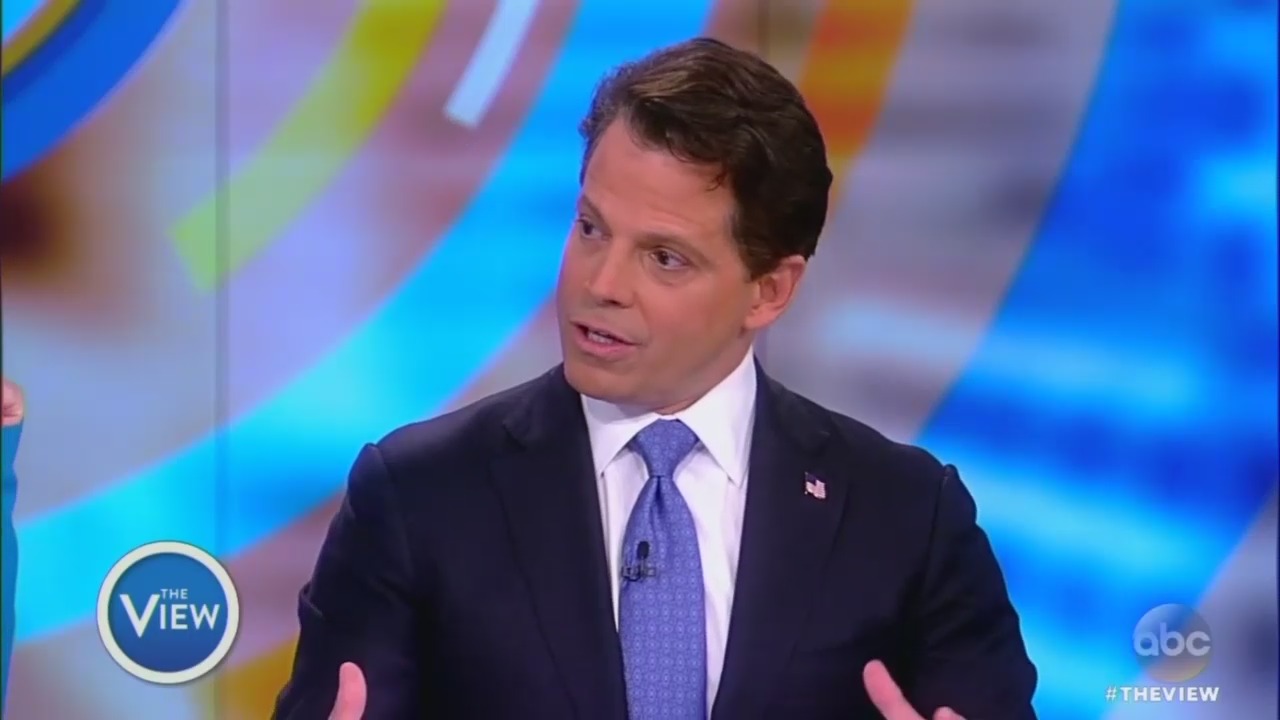 Anthony Scaramucci was the welcomed guest on Friday’s The View, where the short-lived former White House Communications Director happily dished insider details on all the staffers he didn’t like while working in the White House, to the liberal hosts’ delight. Virulently anti-Trump host Joy Behar led the discussion, and at every opportunity, she tried to get Scaramucci to bash President Trump along with current and former White House staff.

During the lengthy interview, many segments were spent asking the fired, ex-White House staffer to spill all the secret details he had from working intimately with many of the current and former White House staff, but perhaps the worst exchange happened when they talked about former aide, Steve Bannon.

At one point, Joy Behar demanded to her guest, “Who is the most annoying, horrible person in the Oval Office? The most unlikable. Cmon!”

While most White House staffers, both current and former, would either ignore or turn this question around, Scaramucci happily obliged with sharing negative gossip.

“Well, I would pick two,” Scaramucci offered, to sounds of delight from the panel.

“Drum roll!” Behar joked, while drumming on the table with her fingers.

“How do you think I got along with Reince Priebus and Steve Bannon? You thought that was a good relationship? You thought we were --

“I knew it was Steve Bannon,” co-host Sara Haines gushed.

“That was rough,” Scaramucci added.

At this, Scaramucci tried to start off positive but then quickly went into the name-calling, saying Bannon had a “messianic complex”:

Well, Steve, his best quality he's a great speech writer. He’s got great linguistic skills. His worst quality to me was he had a little bit of a messianic complex. He got very mad at me for going to Switzerland to speak at the world economic forum, which was sanctioned by the communications team, but because he's an anti-global is and he was hitting that economic forum at Breitbart for so many years that put me in disfavor with him. So, you know, people that have messianic complexes, they think they’re the answer, they think they’re the solution. What we know about our country and know about our government, thank God, it's set up a system of checks and balances where it has to be a collaboration.

“Yeah, there's not much checks and balances,” Behar added.

Not satisfied with that answer, host Sunny Hostin tried to get Scaramucci to say something more vile:

Not taking that out, Scaramucci agreed with Hostin’s assessment: “Well I would say that he has those tendencies. If you read Breitbart there's a lot of white nationalist economic fervor.”

“To me it doesn't matter. We're a rainbow. Let's share the pie,” he said before they cut to commercial.

This wasn’t the only time The View hosts eagerly tried to get Scaramucci to bash his former co-workers and boss. They also got their loose-lipped guest to spill on why he didn’t get along with Sean Spicer or Reince Priebus.

At the beginning of the interview, host Paula Faris played a segment from her hostile Good Morning America interview with Sean Spicer that aired September 21, where she asked if it was true that Scaramucci had fed information to comedian Melissa McCarthy about Spicer, during his brief stint in the White House:

FARIS: You talk about Republican on Republican crime. There were reports of so much in fighting. I know you talk about taking the high road. It doesn't sound like that was happening in your stint of the White House. I want you to listen to one more clip.

FARIS: There were also reports he was calling you Melissa McCarthy behind your back which I can imagine was pretty offensive.

SPICER: On some ways, but she won an Emmy. I've been called a lot worse.

FARIS: Was it true?

Faris then eagerly asked Scaramucci, “Was it true?”

He denied those allegations, but instead said he did call Spicer, “Liar Spice” from the 90s female pop band “The Spice Girls”:

SCARAMUCCI: I was calling him Liar Spice from the Spice Girls. ‘I wasn’t calling him Melissa McCarthy.’

FARIS: Was anybody else calling him ‘Melissa McCarthy?’

“It's obvious we've had our differences. By the way a lot of these guys weren't full believers on the whole Trump train. Even going into the election,” he added, to which Behar interrupted:

“You couldn't stand Reince Priebus, you had a name for him,” she prodded.

“That's a weird story. I actually got along with him when I was donating money to the Republican National Committee. You could find me on that donor list. A half a decade writing those checks. I was totally fine as a patron of the Republican party. But once the president was designating me for a job inside the administration, then the food fight started. They did not want me in the administration. I got the job offer on 17th of January. Then there was all kind of cockamamie stories that came out to delay my arrival into the administration. That's a lot of in fighting. Those guys are gone. Unfortunately I'm gone too. But I think it’s moving a lot better directionally--

“It seemed like everybody couldn't stand anybody,” Behar added. “Very dysfunctional.”

To Scaramucci and Faris’ credit, they both brought up the point that the leaks have seemed to stop coming from the White House and that was a good thing. But Behar disagreed, calling the leakers “whistleblowers.”

“Leakers are people that are saying really bad things about each other in an effort to undermine what’s going on in the process,” Scaramucci pushed back.

“Maybe they don't believe in the process, that’s why,” Behar snarked, before shifting the conversation in another direction.

Scaramucci’s comments of course made a big splash with the liberal media, who started sharing his remarks early Friday afternoon. NBC News gushed, “Scaramucci Takes Revenge on White House Staffers on ‘The View,’” while other liberal outlets quickly picked up the story as well.