Don Lemon to Nye: Is U.S. 'Doing Enough' to Address 'Root Cause' of Hurricanes? 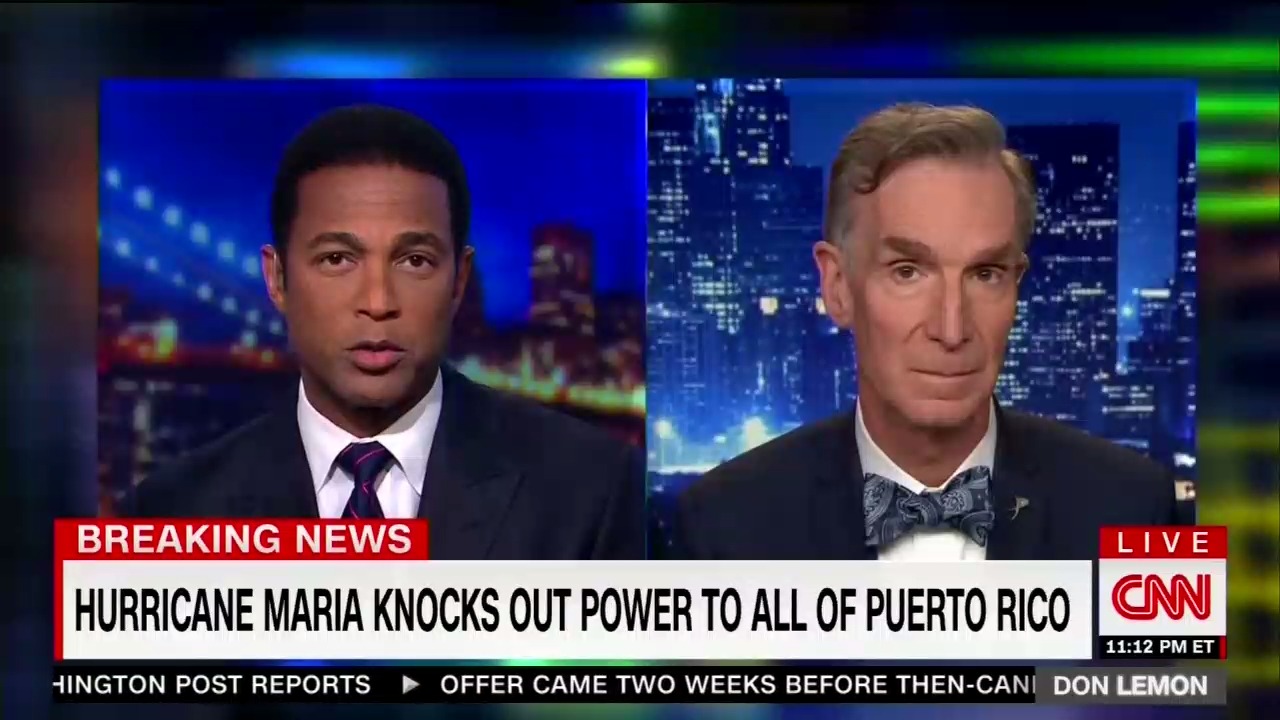 Wednesday on CNN Tonight With Don Lemon, the host brought on a former children’s television host to push the idea that the recent hurricanes and earthquakes were the result of manmade climate change.

What made the segment even more ludicrous, was that Lemon pointed out that actual climate scientists have said these natural disasters aren’t due to climate change, but he continued pushing for that as the “root cause” anyway.

During coverage of Hurricane Maria, Lemon took a break to bring on Bill Nye on the September 20 show, shortly before midnight. He immediately asked the former television show host and engineer if there was “a scientific explanation” for “why” there’s been “so many powerful storms this year.”

Nye responded dutifully that it was climate change, of course:

Those of us who accept the science of climate change connect all of these with having more heat energy in the atmosphere. You guys, that's what it is. The sea surface is warmer than it's ever been so the storms are bigger than they've ever been. Now, there was a lot of computer models that were working this problem and figured there would be fewer, -- more intense storms but fewer of them but wow, this year has been storm after storm and we aren't done. The so-called hurricane season which is a little bit arbitrary runs all the way through November.

Nye then argued that it didn’t matter if you “accepted” climate change or not, (clearly taking a more civil tone than he did back in July when he called skeptics “deniers” and “clowns” that needed to “die off”) but the government need to spend more money on better infrastructure anyway:

And I'll just tell you, you know, the problem with these hurricanes is the structures, the infrastructure. They only last a few hours or a day or two, but when all the buildings and especially all the electrical power lines are destroyed and water infrastructure is messed up, that's when you have all this hardship and suffering. So we in the engineering community would prefer us to accept the threat of climate change and build our infrastructure, our buildings, our electricity, electrical grid and our freshwater supplies to be more robust.

At that point, Lemon did something most media hosts refuse to do: He actually quoted an opposing viewpoint from his liberal guest:

I want to mention someone pushing back on this, his name is Cliff Mass, he’s a professor of atmospheric science at the University of Washington, he is pushing back on the idea that the massive flooding we saw from Hurricane Harvey was caused by climate change or global warming. He says “the bottom line is this analysis is that both observations of the past decades and models looking forward to the future do not suggest that one can explain the heavy rains of Harvey by global warming and folks that are suggesting it are poorly informing the public and decision makers.” What do you say to that response?

Nye rightly acknowledged he was out of his league, begrudgingly admitting the climate scientist “may be right,” and instead shifted the conversation to argue for bigger government and better infrastructure instead:

“Are we doing enough to address the root cause?” (The ‘root cause’ being of course, climate change.)

Nye lamented that climate change had “become a political issue” when clearly something had to be done to better prepare cities and towns for natural disasters like these.

I've been at this for almost 30 years now, you know. By means of science education and then as climate change became a political issue, you -- people like you have thrust me into this position. With all that said, wouldn't it be better if we had energy independence and reliable electricity for everyone and provide the internet for everyone, wouldn't life be better? But this takes investment and people disagree in what to invest and somehow climate change has become part of this. If you live your life with the belief that humans are not putting more carbon dioxide in the atmosphere to make the water in the Gulf of Mexico warmer, to make hurricanes stronger, okay. But what about the rest of us in the overwhelming majority of scientists who have been calling attention to this issue since -- well certainly since 1988. The other big deal going on are the earthquakes.

“Let me ask you about that...Could there a connection between this and the quakes or is it just a coincidence?” he eagerly asked.

But Nye wouldn’t bite at that one.

“They're completely unconnected,” he admitted. But, he argued, they were another reason why we need more government spending on infrastructure:

However, the connection for me as an engineer is in the infrastructure. I’m a mechanical engineer but there’s an old saying in civil engineering, earthquakes don't kill people, buildings kill people. So if you are in, for example, the country of Japan, earthquakes are routine and they require buildings to be built to withstand -- earthquakes are still troublesome and people are still very concerned about them but you don't have the sort of falling apart of infrastructure that we have to a limited extent in the United States and as we saw here in Mexico. It requires investment. You can design buildings that withstand earthquakes. It takes more investment. It takes planning, it takes zoning, it takes thought.

But he ended his call for more infrastructure by appealing to climate change ideology, yet again:

“[E]ngineers have given it a lot of thought and by embracing this bigger picture, I believe we could improve the quality of life of people everywhere,” he stated.

After thanking him for coming on the show, Nye gushed, “Let’s save the world!” as his parting words.

Nye is routinely brought out by the media to push for climate change, even though he is not a climate scientist. By CNN pitting Nye against an actual expert on the atmosphere, and then dismissing what the expert said because it doesn’t fit their politics, shows just how anti-science the network really is.