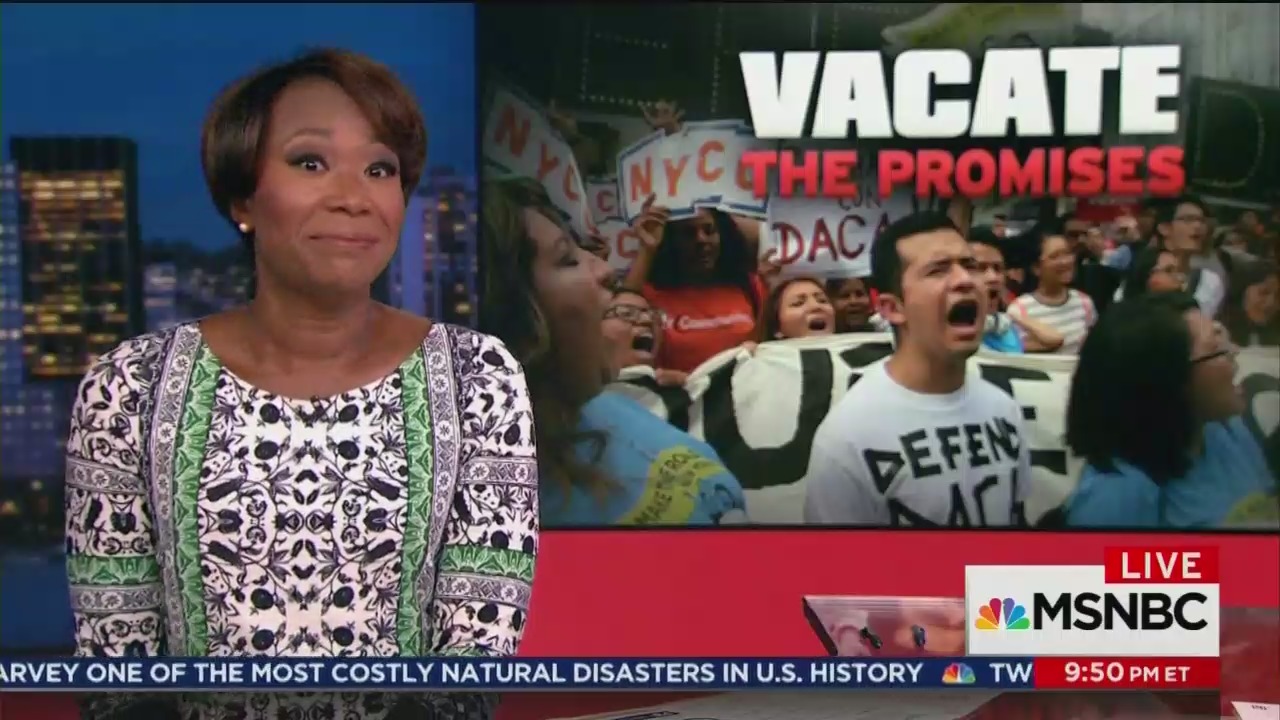 MSNBC’s Joy Reid guest-hosted The Rachel Maddow Show August 31 where she essentially called President Trump a hypocrite for wanting to end DACA because he’s “married to an immigrant.”

Lest Reid forget, DACA stands for Deferred Action for Childhood Arrivals and applies to illegal immigrant children and young adults who were under 31 in June of 2012, when the act was implemented by President Obama. Nevermind that Melania didn’t come to the U.S. as a child and became a naturalized American citizen years ago, before DACA was even around.

But forget those pesky details. Reid went on a snarky rant against the possibility that Trump will end the Obama-era program that benefits illegal immigrants, even inviting an illegal immigrant journalist-activist on to the program to complain about all the pending doom.

Reid began by explaining that though White House aides denied early reports, Trump is most likely going to end the program, after attorneys general from ten states threatened to take legal action against the president if he does not do so. Reid had no sympathy but only snark for Trump’s impending decision:

But you know, guys, presidenting is hard and poor Donald Trump is apparently having a really tough time making his decision. At least that's what anonymous White House aides would like for us to believe. The headline yesterday, ‘Trump at war with himself over dreamers: Administration officials say he's conflicted between his instinct to be tough on immigration and his personal feelings.’

“Well at least we know who’s the real victim here,” she snarked.

Reid then brought on guest Jose Antonio Vargas, who rose to fame in the past five years as the media’s leftist hero on illegal immigration. Despite being a radical who wanted to ban the word “illegal” from mainstream media coverage on illegal immigration, (a goal it looks like he’s mostly achieved), he has been praised by virtually every media outlet for his anti-American activism. He was even hired by the Washington Post as a reporter, and partnered with the L.A. Times to create a site on “race, immigration and multiculturalism.” Vargas was even given a starring role in a full length documentary of his life by CNN.

Clearly the media’s darling, Reid introduced Vargas as her “friend” before he jumped in to explain “what’s at stake”:

“Again, what's really at stake here is how do we define American in this country,” Vargas lamented. Seems to be an obvious answer here, but Reid just lapped up the leftist nonsense.

“That's what's at stake. Our moral conscience is at stake,” Vargas sighed. He went on to worry that virtually every service sector in our country would be at stake, because of all the “undocumented” teachers, nurses, medical students, firefighters, police officers and military members:

[A]nd the president -- look, I would like to believe that his heart, that he really is thinking through this. He's really thinking through the fact that, you know, if DACA gets taken away, my friend Brittany Packnett at Teach for America, told me that 10,000 students in about a dozen states in this country would lose their teachers. Undocumented teachers right? Nurses.There's about 80 undocumented medical students across this country, right? There's of course undocumented firefighters, police officers, people serving in the military. So we would want people to serve in the military and then be afraid that they may get deported?

Clearly not understanding that the ten attorneys general threatening to sue Trump represent actual American citizens and are there to protect their interests, Reid stupidly asked Vargas, “Who would he be, what constituency would he [Trump] be serving?”

VARGAS: We have here 73% of Donald Trump voters actually want Trump to keep this. So we're talking about, what, 25% of people?

REID: Right. Of his supporters.

VARGAS: Of his supporters.

REID: He's down to about a third maybe of the electorate.

VARGAS: Who is the president really serving by this?

After Vargas read some sob stories, Reid wrapped up the interview by mocking Trump as a hypocrite for potentially ending the program. Her reason? His wife, a naturalized American citizen, is somehow relevant to this discussion on illegal immigrants.

"And let's not forget that the president is married to an immigrant, which is the ultimate irony," Reid stated.