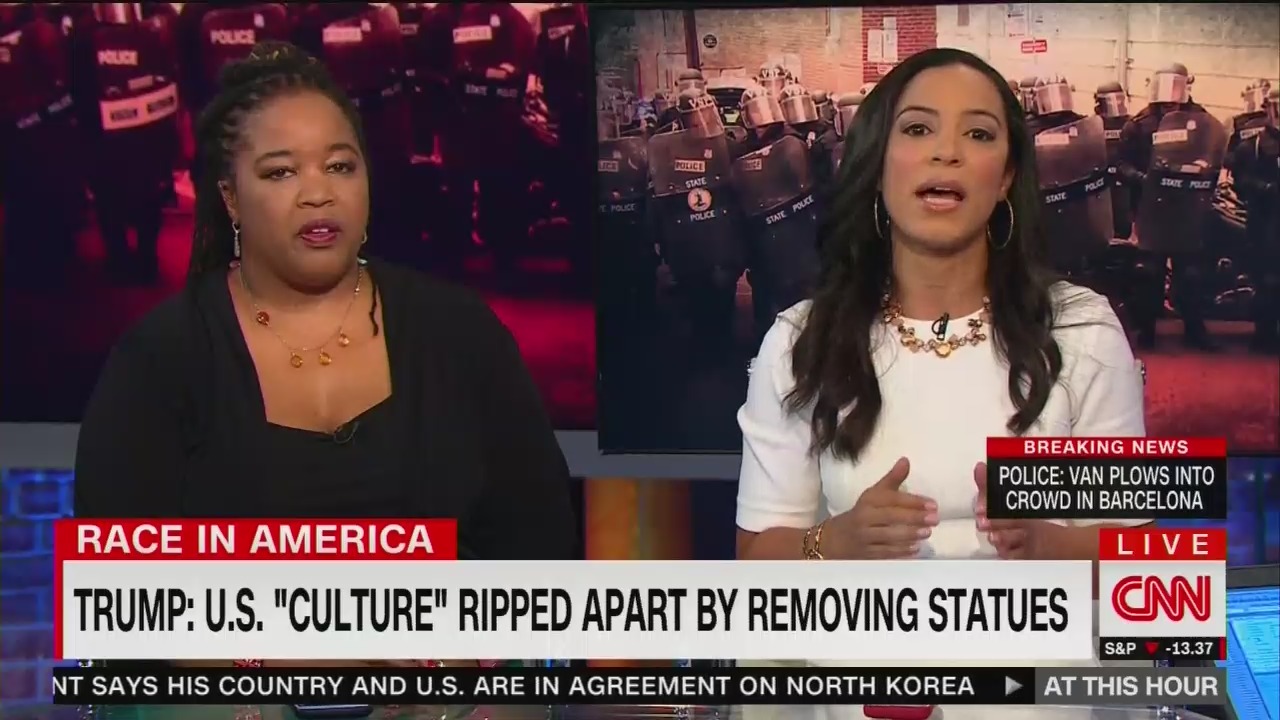 As the left mobilizes mobs to tear down confederate statues (and peace monuments) from city-to-city, it was only a matter of time before they would be going after our Founding Fathers. On CNN Thursday morning, liberal analyst Angela Rye argued that our nation’s first president was as detestable as Robert E. Lee because he was a slave owner. “To me, I don't care if it's a George Washington statue or Thomas Jefferson, they all need to come down,” she said before ranting about America’s “very violent past.”

In a panel discussion with the Daily Beast’s John Avlon, journalist Farai Chideya and analysts Amanda Carpenter and Angela Rye, host Kate Bolduan asked her guests about Trump’s tweets, which questioned who was “next” on the left’s list of objectionable historical figures. Carpenter lamented that Trump was dividing the country into “choosing sides” over this confederate monument issue, and leaving a political dynamic that left “no room for moderation.”

Bolduan then asked Avlon if the comparison of George Washington to Robert E.Lee was valid.

“It's an idiotic comparison. I think it scratches an itch we have seen throughout a lot of American history,” Avlon began. “It falls apart on the fundamental level that George Washington devoted his life to trying to unite our nation. Confederate generals made a fateful decision to try to tear apart our nation and 6 million people died,” he said, before dismissing that Lee and Washington were on the same plane of moral equivalency.

Bolduan then went slightly off-topic with guest Farai Chideya, asking her about white nationalist’s beliefs that America needed to be taken back to the days of white supremacy, which Chideya dismissed as an inaccurate belief. “When they talk about the original America, it was already multicultural. There were already Latinos. There were already black people. If we are going to relitigate history, let’s start with that,” she said.

Coming back to the monuments debate, Bolduan asked Rye,“Is it about statues and monuments?”

Rye, the former executive director of the Congressional Black Caucus, brought the issue back to racism and America’s “very violent past that that resulted in the death and the raping and the killing of my ancestors,” which she said, was “protected” by George Washington:

RYE: We have to get to the heart of the problem here. The heart of the problem is the way many of us were taught American history. American history is not all glorious. I love John to death, I couldn't disagree more about George Washington. George Washington was a slave owner. We need to call slave owners out for what they are. Whether we think they were protecting American freedom or not. He wasn't protecting my freedom. I wasn’t someone--my ancestors weren’t deemed human beings to him. To me, I don't care if it's a George Washington statue or a Thomas Jefferson statue or a Robert E. Lee statue, they all need to come down. There is a way to recognize--I'm not -- I'm not -- no, no, no, but I'm not -- I'm going to finish my point. I'm going to finish my point. I'm not feeding into white supremacy. I'm calling out white supremacy for what it is. And sometimes, what it is John, are blind spots. Sometimes what it is, is not acknowledging this country was built upon a very violent past that resulted in the death and the raping and the killing of my ancestors. I'm not going to allow us to say it's okay for Robert E. Lee but not a George Washington. We need to call it what it is.

Rye then warned that we had to keep “teaching” about Washington because we were “very close” to being a nation of slavery again:

RYE: I don't say they don't deserve to be taught about, learn about it so we don't repeat it because we are very close to repeating it right now. I'm not giving deference to George Washington or Robert E. Lee.

AVLON: Look. We have to be real careful here. What we are doing here is polarizing the conversation exactly in the direction that Donald Trump wants. We can obviously, the founding fathers were slave owners. The larger point is the perspective is key in American politics. While George Washington released his slaves upon his death bed, which was definitely too late,cold comfort for everybody and slavery is the original sin in our country that we’ve been dealing with fitfully-- we need to confront more correctly. If you all of a sudden buy into the slippery slope argument that Donald Trump is presenting---

AVLON: That the Founding Fathers were the moral equivalent of confederate generals

AVLON: I believe you just did.

RYE: I didn't. I don't think you liked what I said but that's not what I said.

Chideya then tried to make the point that our heroes are “nuanced” and complex, and no one has to have led a perfect life to be considered a figure worthy of respect:

CHIDEYA: Can I throw one more thing in there. In my house, I have a portrait of George Washington and family. In that portrait is a man named William Lee. He is a black man who was -- who worked with George Washington. He is depicted in the painting Washington crossing the Delaware. Yet, George Washington, this same man who I believe was a hero, also pursued his runaway slave, Ona. There's a new book out called "Never Caught." George Washington was a complex man who was a hero, who validated William Lee, who served beside him and yet who pursued a runaway slave across America. I'm someone who can believe in the nuance of heroes. There are no people who are heroic who don’t have lead feet. So, I perhaps triangulating between both of you. I am obsessed with history. Let’s just dig into it. Let’s at least know now our history. I don't think George Washington is a Robert E. Lee and I don't think President Trump knows anything about history, he is using it as a blunt instrument for talking points to please white supremacists. That's what I believe.

Rye is unfortunately not alone. What was once a fringe view is being embraced by the mainstream left, with more renewed calls for the takedown of anything erected to Washington or Jefferson. Celebrities are even equating any figure who owned slaves in our nation’s history to Osama Bin Laden.