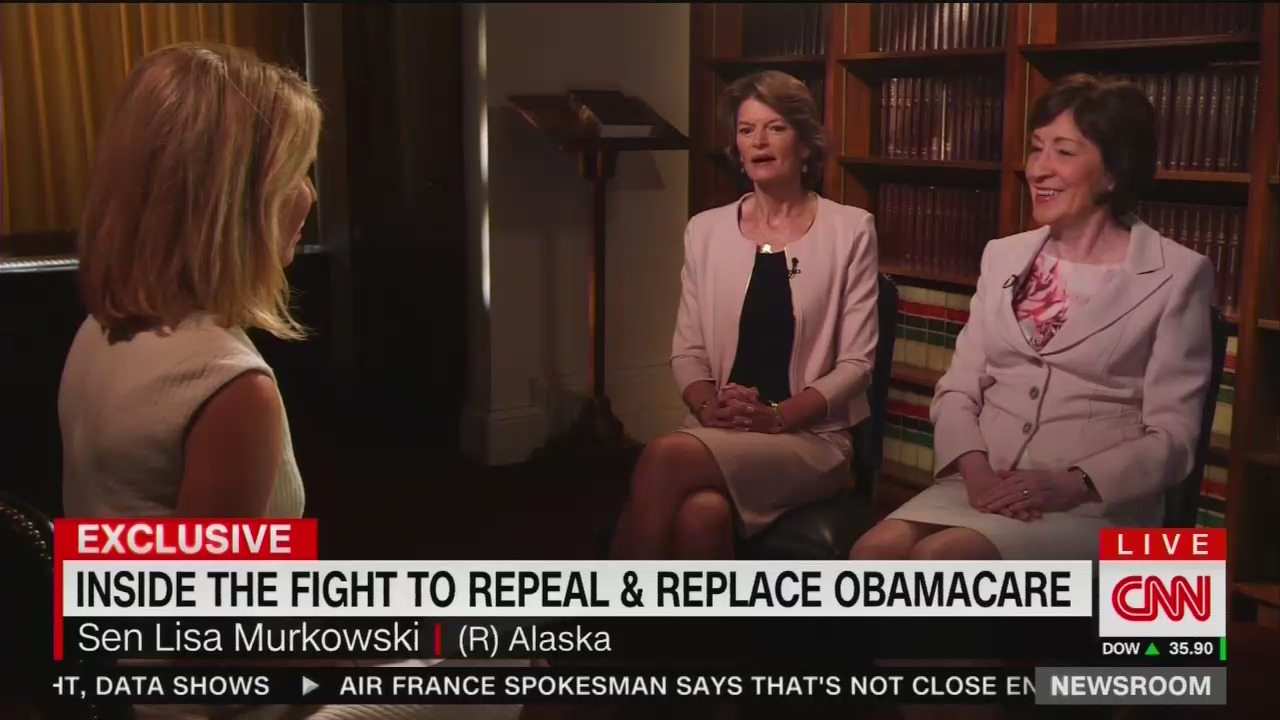 On CNN Friday morning, the network repeatedly played an interview between Dana Bash and Senators Collins and Murkowski. The two female Republican senators were the sole Republicans besides John McCain, to vote against their party’s plan to repeal and replace ObamaCare last week. While the media spent endless time praising the “heroic” actions of McCain, CNN felt like it was the other two senators time to shine in the media spotlight.

After playing a sound bite of Donald Trump saying Congress must repeal and replace Obamacare, anchor Poppy Harlow sarcastically quipped, “Believe it or not, they didn’t pass it like he wanted them to. Now they have a lot to say,” she said before introducing Senator Collins from Maine and Senator Murkowski from Alaska. Harlow then played tape from CNN’s chief political correspondent Dana Bash’s interview.

“They were the only senators to vote against the plan all the way through the process. They were close before this, but this high profile and high intensity experience took their bond to a new level,” Bash gushed.

Bash started off talking about how she “sensed” that the two women were “relieved” to be sitting next to eachother during the health care vote. “Did I read that right?” Bash offered. After Collins and Murkowski confirmed they were happy knowing “a kindred soul was nearby,” Bash asked if the two saw themselves as “heroes” or “heretics.”

COLLINS: Well, I see myself as someone who has an obligation to represent the people of Maine. Sometimes that means casting uncomfortable votes, votes that will make my party uncomfortable and even angry at me.

MURKOWSKI: You want to vote to do the right thing. So, worrying about the consequences, are you fearful of repercussion from -- from your party? A tweet from the president? A backlash from your leadership? I don't believe that we should be motivated or discouraged from taking the positions that are important to the people that we represent and our respective states.

“Can you give me a sense of the kind of pressure you had and how did that bear itself out?” Bash asked curiously.

Murkowski explained that she told Trump directly that she wasn’t going to vote “for the Republican party” but “for the people of Alaska.” Collins added that she was “so proud” of her for standing up to the president. She added: “That’s the way I feel too. The people of Maine don’t expect me to be a rubber stamp.”

Then Bash pulled out the feminism card, actually asking the two women if it would’ve been a “priority” to save Planned Parenthood funding if they had been men:

If that wasn’t bad enough, Bash then quoted Madeleine Albright at Murkowski and Collins:

“I want to borrow, a, a phrase from the first female secretary of state that talked about ‘cojones’ and a lot of people are saying that you two have more ‘cojones’ than a lot of the guys around here. Do you buy that?” she asked.

After Collins said she wouldn’t “judge” any of her colleagues, Bash continued the fawning:

“You guys have some pretty stiff spines,” she praised.

Bash went on to ask the senators repeatedly if they felt “intimidated” by President Trump.

I have seen congress and congress people when they have some political fear of their president. He tried to intimidate you on Twitter, you know, very directly, specifically, maybe having his interior secretary call you?

Did you feel he was trying to intimidate you?

While Collins and Murkowski did not give details at the end about their conversations with Trump, anchor Poppy Harlow smirked at the end of the interview.

“Fascinating. You can read so much in their faces, Dana, right? Diplomatic answers on some of those things. You can see a lot in their faces,” she said. After diverging to talk about the Russia investigation, Harlow asked Bash if this interview was a sign of things to come.

“Do you think part of the reason they sat down and did this very rare interview, are they trying to embolden some of their fellow Republicans to say like ‘come on guys, stand-up!’” Harlow asked.

Bash said that the senators wanted to do the “right thing” by making health care better but the “process didn’t allow for that.”

“That’s the message they want to send, in addition to good old-fashioned girl power,” Bash gushed.

“There you go. There you go. Cojones, as you said. Thank you, Dana, great interview, we appreciate it,” Harlow wrapped it up.