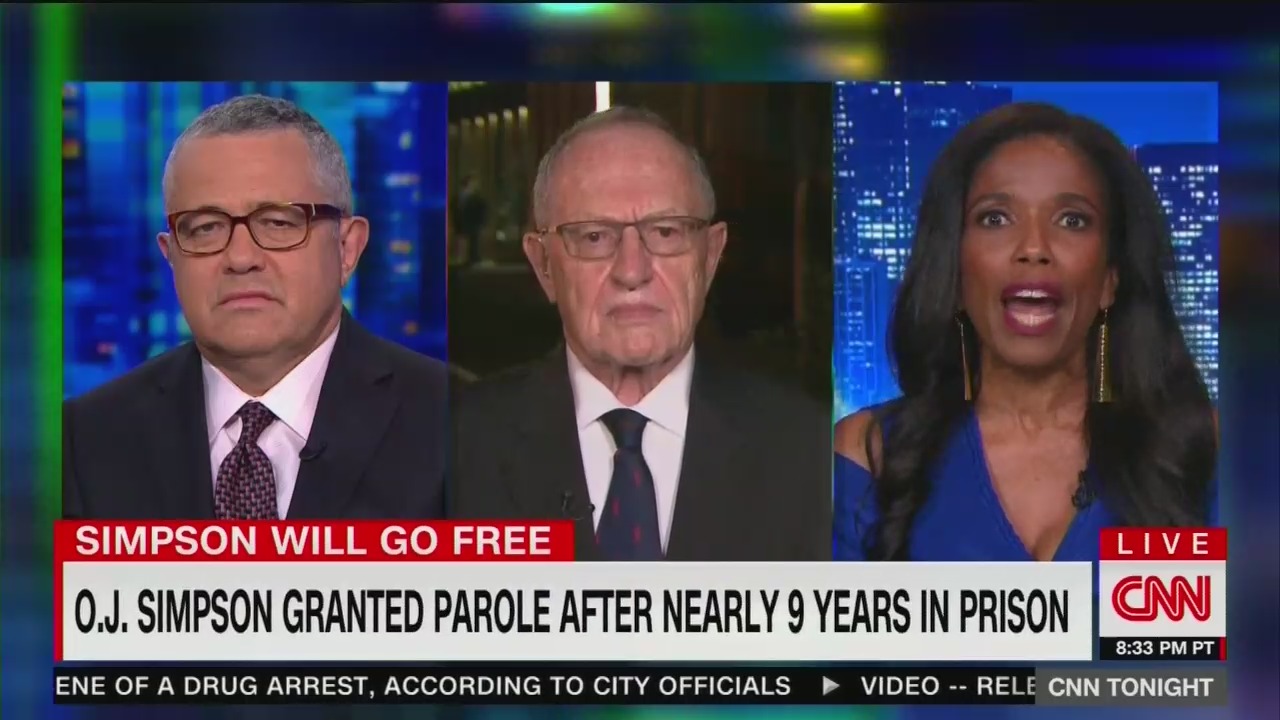 On CNN Tonight Thursday, a panel discussion on O.J. Simpson’s parole verdict earlier that day veered into politics, after one guest related the treatment of Simpson to Black Lives Matter. CNN legal analyst Areva Martin compared the reactions to yesterday’s verdict as racial, insinuating that whites angry over it were treating Simpson more harshly than they would a white person who did “much worse” things. After this comment, she got into a back-and-forth argument with former Simpson legal advisor Alan Dershowitz over the criminal justice system and Black Lives Matter.

The panel conversation turned political after Martin admitted she was “shocked” at the responses she had been getting on social media, after bringing up race in this case, earlier on the network.

I'm kind of shocked, Don. At the responses I've been getting on social media all day. I've been called lots of names, many of which I can’t repeat, because I've been talking about race and the criminal justice system all day on this network as it relates to this parole hearing and it's funny to me that this is a country about second chances until it relates to O.J. Simpson. The whole concept that someone serves their time, that they're a model prisoner, that they do the things that are asked of them to do while incarcerated and when it's time to be paroled and the parole commission says that they met all of the requirements, that they're a low risk offender and they're granted parole, now all of a sudden there's this sense he should serve this infinite amount of time not for the botched robbery, but for the alleged crime that happened in the 1990s which the parole board said they got thousands of letters of people urging them not to grant parole because of the verdict in the murder trial.

I disagree. I think there's so much hypocrisy. If the shoe were on the other foot, if this were a white policeman who, as in the Rodney King case who had severely beaten an black person and then he got tried again as he did under federal law, you know, many in the black community would take the opposite position. This is an issue where race often decides which side you're on and there's very few principled people who stick to the same view regardless of what the racial composition is and that is the real problem with American justice is. People pick sides, pick sides based on race, pick sides based on politics. Pick sides based on a variety of factors, gender ,and then they don't apply a single principle. They ask the question my grandmother used to ask. When I say grandmother, the Brooklyn Dodgers won, she’d say ‘yeah but was it good or bad for the Jews?’ And that’s the question I think many people asked yesterday: Is it good or bad for black people? Is it good or bad for Republicans? Is it good or bad for Democrats? And that's not the way our criminal justice system should operate on either side.

Host Don Lemon jumped in to correct Dershowitz, saying that this parole hearing “had nothing to do” with Simpson’s 1995 trial. Martin then argued more forcefully about how our “racist” criminal justice system didn’t give Simpson a fair shot:

I just want to respond to Al and talk about the hypocrisy. The hypocrisy here is there was a huge divide in the country around the verdict, with the acquittal with respect to O.J. Simpson and the very same people that are castigating O.J. Simpson have stood by people who have done far worse than O.J. Simpson. We know this criminal justice system is not fair. That African Americans are disproportionately impacted in a negative way, from everything to how they're prosecuted to how they're sentenced. It's not a fair comparison, it’s not apples to apples when you talk about black men in particular, in the criminal justice system. They're not treated as Jews are treated. That's an unfair statement to me.

Dershowitz then started arguing with Martin, saying that her “Black Lives Matter” argument wasn’t about justice for everyone, before she slammed AG Jeff Sessions as leading a racist justice system:

MARTIN: Why are we talking about Black Lives Matter matter?

DERSHOWITZ: Because you're talking about equality, we don't have equality on either side

DERSHOWITZ: No. We have to do it before that. We have to treat everybody equally and we can't wait until the system improves before we have a single standard. We can't have affirmative action in the criminal justice system. Sorry that doesn't wash under American justice.

MARTIN: Well it’s a little difficult to talk about treating everyone equally when you have an Attorney General and you have prosecutors that don't treat everyone equally. We have a system that disproportionately negatively impacts African Americans.

[W]e focused on this case but we learned a lot and I think Alan -- blacks and whites don't live in perfect equality in this country and the fact African Americans have had terrible relations with the police, especially in Los Angeles, that's a big deal and that was a big reason why the jury came out the way it did and it's a big reason why in 2016 there was so much interest in the O.J. Simpson case because it was in the immediate aftermath of Ferguson and Black Lives Matter matter. Those issues are real and they are not just black people and white people have similar grievances. It's different.