On the heels of comedian Kathy Griffin essentially sending a death threat to our president, one play in New York is also stretching the limits of what can be considered “free speech.” Shakespeare in the Park, a Summer program series hosted by New York’s Public Theater, has modernized Shakespeare’s classic play Julius Caesar, starring Donald Trump and Melania as the protagonist and his wife Calpurnia.

Playbill simply called it a “Trump-inspired Julius Caesar” that “takes aim at the current presidential administration.”

The play’s website adds this description of Caesar, aka Trump:

Magnetic, populist, irreverent, he seems bent on absolute power. A small band of patriots, devoted to the country’s democratic traditions, must decide how to oppose him. Shakespeare’s political masterpiece has never felt more contemporary. 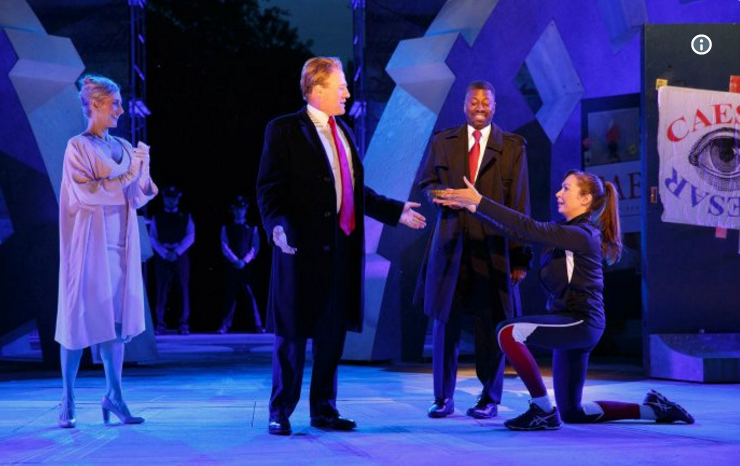 According to one play attendee who spoke with Mediaite, the similarities to Caesar and Trump were “blatantly obvious:”

“The actor playing Caesar was dressed in a business suit, with a royal blue tie, hanging a couple inches below the belt line, with reddish-blonde hair — just like Trump.”

Not only that, but the actress playing Caesar’s wife, Calpurnia, resembled the First Lady and spoke with a Slavic accent, just like Melania.

And of course just like in the original play, Caesar is stabbed to death by the Senators he once trusted. But in this “modern version,” an American flag looms overhead during his murder. The scene is very graphic, according to the playgoer, who described the scene as “shocking” with blood “spewing everywhere.” She summed up the scene as such:

“I mean, it was the on-stage murder of the President of the United States.”

This isn’t the first instance where the media simply didn’t seem to care that our sitting president was receiving death threats in the form of “art.”

Last week there was the Griffin photo, where she channelled ISIS in holding up Trump’s severed, bloodied head. And in today’s Washington Post, the liberal rag seemed to take pleasure in noting how much the world hated Trump. The Post’s Avi Selk showcased photos of other countries’ Trump effigies--from pinatas, to extremely vulgar parade floats, to dummies hung from nooses. Selk offered no sense of concern that a representation of our president was gleefully being burned or beaten to death by foreign citizens who more than likely hated America as well. The photo listicle simply entitled, “Photographic Evidence That the World Is Mean to Donald Trump,” downplayed these often violent symbols of protest as “creative” ways to “be mean” or “make fun” of Trump.

“For a president who is often accused of rolling back U.S. influence in the world, Trump has certainly inspired many abroad to great creativity in their efforts to make fun of him,” Selk wrote. 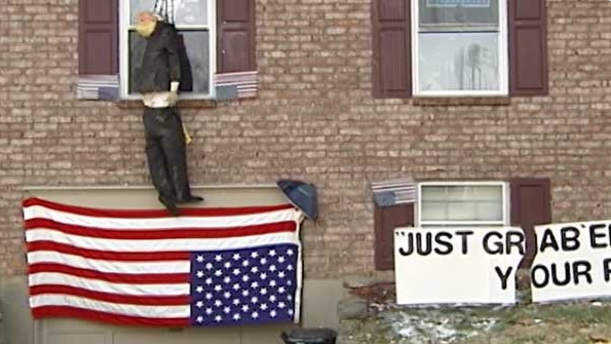 The listicle even ended with a local news photo of one Cincinatti man’s “labor of love:” a dummy of Trump hanging outside his window by a noose.

Now, it’s plain to see that all of these displays are overt depictions of killing our president. Yet the media has barely batted an eye. Compare this to how the media reacted when a clown simply donned a mask resembling our last president. In 2013 at the Missouri State Fair, a rodeo clown wore a mask that resembled Obama and was banned for life from the event for doing so. The media was outraged, despite no threats of violence or violent depictions being made. But like Trump, the Republican presidents before him also had plays calling for their assassination, and incidents where rodeo clowns wore masks of their likeness. Yet the media didn’t care then either.