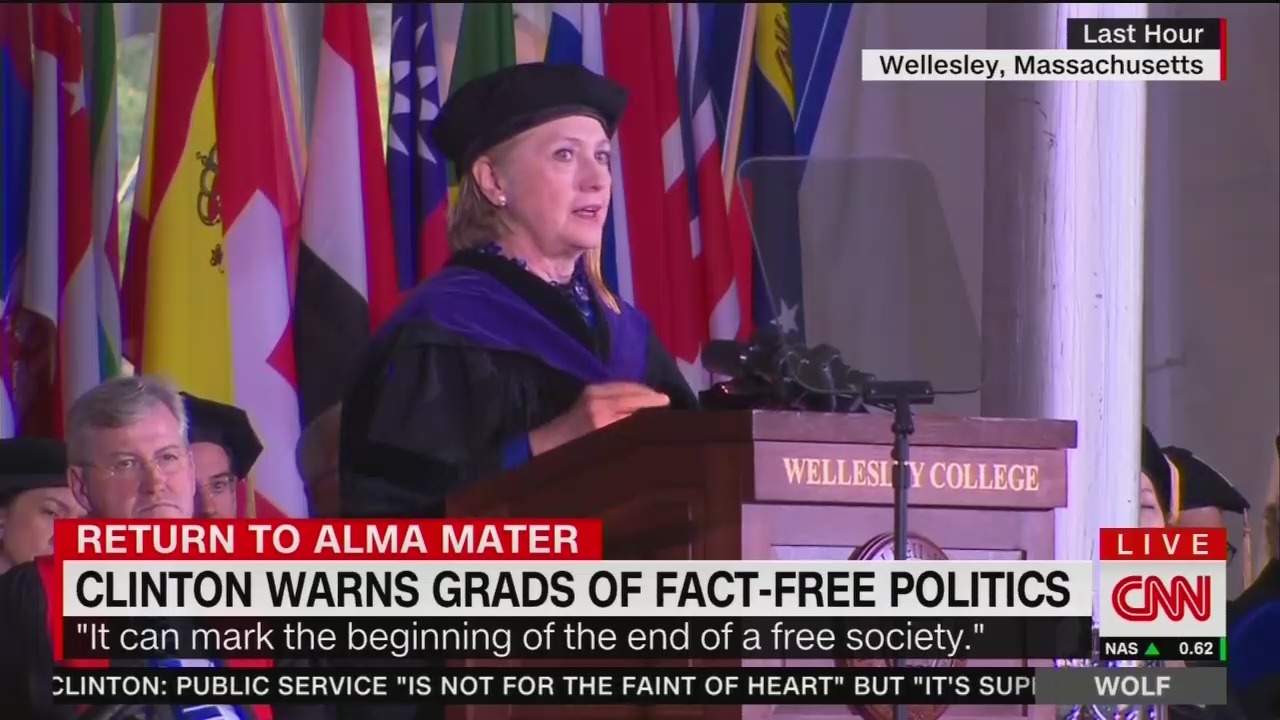 Hillary Clinton came out of the woods to deliver another vicious anti-Trump speech Friday afternoon and the media couldn’t get enough of it. Clinton was delivering the commencement address at her alma mater Wellesley College, and both MSNBC and CNN took precious time out from their endless Russia conspiracy coverage to gush over the failed presidential candidate’s “fiery” “takedown” of our president.

Immediately after the speech was over, MSNBC and CNN were ready with gushy praise for the “feisty” Clinton. MSNBC immediately cut to Andrea Mitchell once Clinton had finished her speech, who asked, “Where was this speechwriter in 2016?” Mitchell then lauded the “explicit” takedown of Trump, attacking the “cruelty” of his budget “on the most vulnerable of our society.”

MITCHELL: Some people were messaging ‘Where was this speech writer during 2016?’ This was a strong speech, but it wasn't just a take down of Donald Trump. It was her most explicit since the election. But it was mores aspirational speaking to a very positive and reaffirming audience, of course, her Wellesley graduating class on her turf which is where it all started in 1969 when she was chosen as the student speaker. She was talking about being hopeful but she was comparing it to1969 with some unflattering references to the times, the turmoil, the protests, the fact that Richard Nixon was elected but would end up leaving in disgrace and impeachment. That got a lot of applause. She had some humor, but I think this was her first specific attack on his budget, talking about the cruelty of his budget on the most vulnerable of our society. Speaking of women and LGBT rights, and others who are being left behind. So she really went after Donald Trump in a way that he has not since election day.

Over on CNN, the network’s political director David Chalian raved about Clinton’s “fiery, feisty takedown of Trump.” “She just doesn’t give a heck about anything anymore!” Chalian touted.

CHALIAN: But watching that speech which was a fiery, feisty takedown of Trump without calling him out by name, we've seen multiple Hillary Clinton appearances and speeches since the election where she just doesn't give a heck about anything anymore. This woman that used to be the most scripted, afraid of her shadow, consultant laden, weighing in her mind, say this, say that, how will it be perceived, in the last six months we keep seeing her in a way she just doesn't seem to care about the perception of her remarks as much as she once did and feels emboldened to make these arguments against the president.

“What does she have to lose?” anchor Wolf Blitzer asked. “She wants to speak out, she can speak out!” he added.

Later in the same hour, CNN’s Brianna Keilar tried to spin Hillary as the comedian:

KEILAR: I think you could definitely say she was sort of self deprecating, humorous about her loss in the election here. She said she's been going on long walks, she’s organized her closets, said to much laughter that chardonnay has really helped. But I think what a lot of what this speech will be remembered for was how sharp she was against President Trump, something we have seen her do in a big way lately here in the last few weeks.

Keilar was touting Clinton’s speech hours before on CNN as well. Hoping that Clinton would be as “sharp-tongued” as her last interview with Christiane Amanpour, Keilar said it was “fascinating” how “free” Clinton was to “speak her mind” since the election was over.

The Washington Post’s David Swerdlick echoed what Keilar said then gushed that Clinton had found “her groove post election.”

BRIANNA KEILAR: I think we're going to see something in a similar vein. I think the question is, is she going to be as sharp tongued as she was in that interview with Christiane Amanpour? But I think at least, the tone, maybe, but I think the message I think, we should expect to be the same. It's fascinating, Poppy, when someone no longer has political aspirations ahead of them how free they are to speak their mind.

DAVID SWERDLICK, ASSISTANT EDITOR/WASHINGTON POST: Yeah, no, I think that Secretary Clinton is sort of finding her groove post election…. but as Brianna said, she is now free of the election cycle to sort of speak her mind, maybe in a limited way, about what she sees in the political events surrounding the Trump campaign. Just for the record, I am one that, you know, it’s  the longest of the long-shots, Poppy. I'm not going to 100% rule out Secretary Clinton for 2020. Something tells me she hasn't let it go 100%.

Fellow panelist Lynn Sweet, reporter for The Chicago Sun-Times, added that she hoped there would be some “wicked funny lines” from Clinton, and “a little rueful self-depreciation.”

“So I would expect at the least, candor wrapped in wit,” Sweet noted. But then Sweet turned from gushy journalist to Democrat operative, pleading for Clinton to “be a factor” in the Democrat party again.

LYNN SWEET, CHICAGO SUN-TIMES: Well, that's true. There's no person, so that makes it easier and freer for her to be herself. I would expect that there will be some wicked funny lines coming out of this, a little rueful self-deprecation which these kinds of speeches call for. And the post Obama era is bringing us some not-so-veiled shots at the Trump White House.

.... So, I would expect at the least candor wrapped in wit and this positive vision that Brianna talked about. But I think Hillary Clinton just needs to be a factor right now, not necessarily say here's the heir apparent. Look how fractured the democratic party is. They just went through this painful election between Keith Ellison and Tom Perez for DNC chair, and in order to make the DNC work now, Perez has practically made Ellison a partner in the organization.