CNN Liberals Blow Up After Conservative Brings Up This Disgraced Congressman 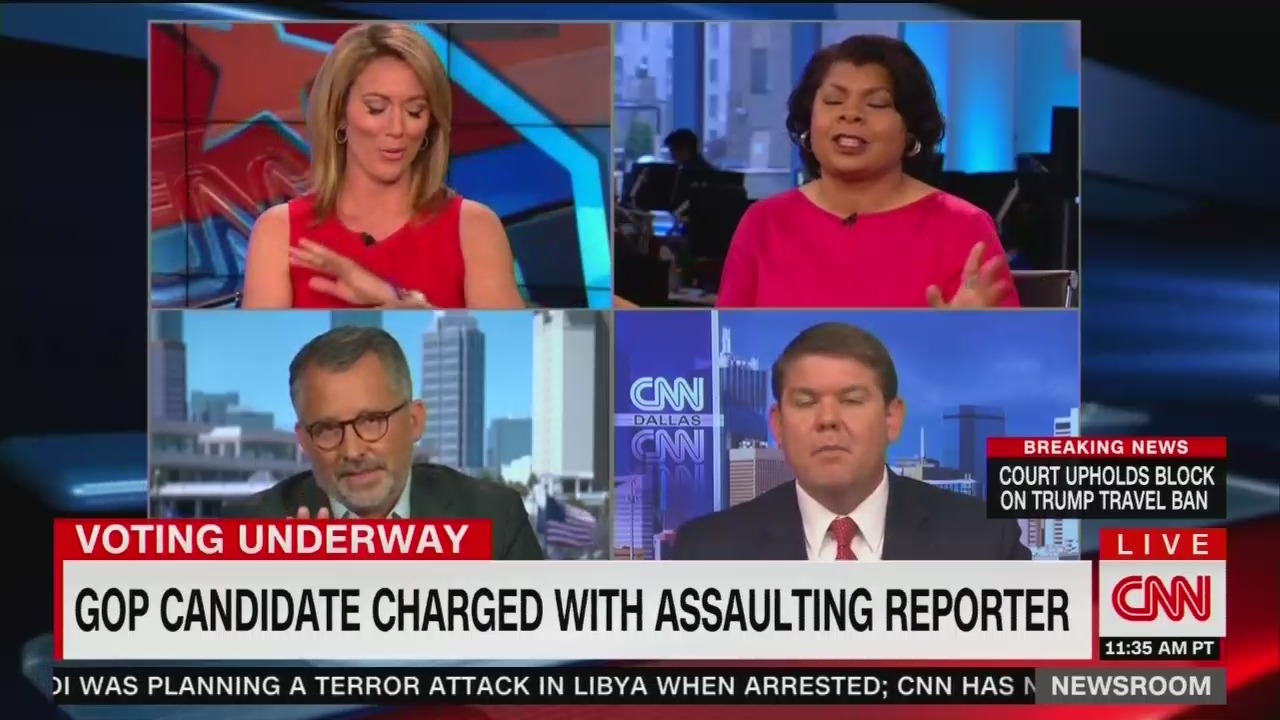 After Republican congressional candidate Greg Gianforte slammed a reporter to the ground yesterday, the media has been in a flurry condemning the violence and trying to tie Donald Trump’s rhetoric to the attack. During a segment on CNN Newsroom Thursday afternoon, conservative radio host Ben Ferguson dismissed the notion that Trump was responsible, before pointing out the hypocrisy from Democrats in supporting disgraced elected officials in their own party. But Ferguson wasn’t able to make his point because as soon as he uttered the name of one of these Democrats, the liberal panel exploded in anger and shut him down.

After reporter and newly instated CNN analyst April Ryan tried to connect Donald Trump to the attack, Ferguson slammed this blame-shifting by the left as an attempt to “score political points.”

Yes. I understand why Democrats are trying to connect a guy in Montana that was an idiot to the president because you're trying to score political points. Let's separate and actually hold the man, the candidate in Montana, responsible for his actions. This guy and what he did was inexcusable. He should, in my opinion, not only apologize but he should probably drop out of the race. I think he probably knows seven out of ten votes have been cast because you can vote by mail. But for Nancy Pelosi and others to say, oh, well, this was sanctioned by Donald Trump, no, this is a grown man running for Congress who obviously cannot handle the heat that comes with running for office. You hold him accountable but don't try to score political points and try to connect to the White House because you're just as bad as the guy who assaulted the reporter. Grow up and hold the adult accountable.

Host Brooke Baldwin acknowledged his point but still pushed Ryan’s, asking if he felt that the “breakdown in civility,” assumedly caused by Trump, was partly to blame:

FERGUSON: Yes, there's absolutely a breakdown in civility on both sides. There are antagonists, there are people as soon as I get done with this, some people will probably say, Ben, you should literally die. I get that almost every time that we’re on TV. That's where we've gone now as people have become incredibly vile as a group. But again, we need to look at this individual as a grown man running for Congress, and not try to score political points when dealing with him. And he made a stupid mistake. I personally wouldn’t vote for him today, that’s personally why I don’t like to early vote because stuff like this can happen but let's try not to somehow -- this is a kid that gets in trouble and the parents don't want to hold him accountable so he blames the friends for getting in trouble. Well, you're hanging out with bad people. No, you made a bad decision. Don't try to connect with Donald Trump.

April Ryan then jumped in to argue again that this was not only Trump’s fault but was also Pence’s fault, for supporting this candidate before the incident.

RYAN: This is not about Barack Obama! This is about this president supporting this candidate who is filling a vacancy because the person who was in the seat is now in the cabinet of this administration.

Ferguson tried to use Ryan’s point to illustrate that you can’t blame the president for the actions of those in his party, using President Obama as an example. But as soon as his name was even mentioned, Ryan talked over him.

FERGUSON: My point is this there are people that Barack Obama, were in Congress that he supported--

RYAN: Why does Barack Obama come into this? Please. [cross-talk] This is not about Barack Obama.

FERGUSON: Listen to what I’m actually saying. No, you’re making my point for me which is this. When you are the president, you basically support the people that are running on your side of the aisle. There are people that were shady and did stupid things and some that are disgraced politicians. Anthony Weiner is one of them, which a lot of Democrats supported---

At this point, the entire panel consisting of Brooke Baldwin, April Ryan and former Florida Rep. David Jolly raised their hands in the air in frustration, motioning for him to stop talking and shouting over him for daring to bring up Anthony Weiner:

RYAN: He lost it now [laughing]

BALDWIN: Why are we talking about Anthony Weiner right now, my friend? C’mon c’mon c’mon, Let's stay on track.

FERGUSON: The president never put a reporter in a chokehold.

BALDWIN: So we've got to go. We can talk about Anthony Weiner another time. All right?

Shutting down conservatives is pretty standard fare on CNN. As soon as someone from the right brings up a point the liberal panel doesn’t like, the anchor will talk over them or cut straight commercial.