Friday night on Fox News’ The First 100 Days, host Martha MacCallum interviewed the attorneys defending one of the illegal immigrants accused of raping a 14-year-old girl at Rockville High School, just over a week ago. The two lawyers defending 17-year-old Jose Montano blasted what they called the “sensationalized” coverage of the story, (despite the media blackout of its coverage). The primary defense attorney even blamed Trump’s immigration policies for spurring undue outrage at the story.

The segment began with correspondent Doug McKelway introducing Montano’s “high profile” and “respected” lawyer, David Wooten, who had been hired privately by his family. The Fox News reporter noted Wooten had just won a case where his client was accused of sexually abusing a 15-year-old girl. Wooten defended Montano as innocent, claiming that the truth wasn’t black and white:

WOOTEN: There’s your version, there’s my version and then there’s the truth. In my experience as a criminal defense attorney, that is almost always the truth. The truth is somewhere in between. 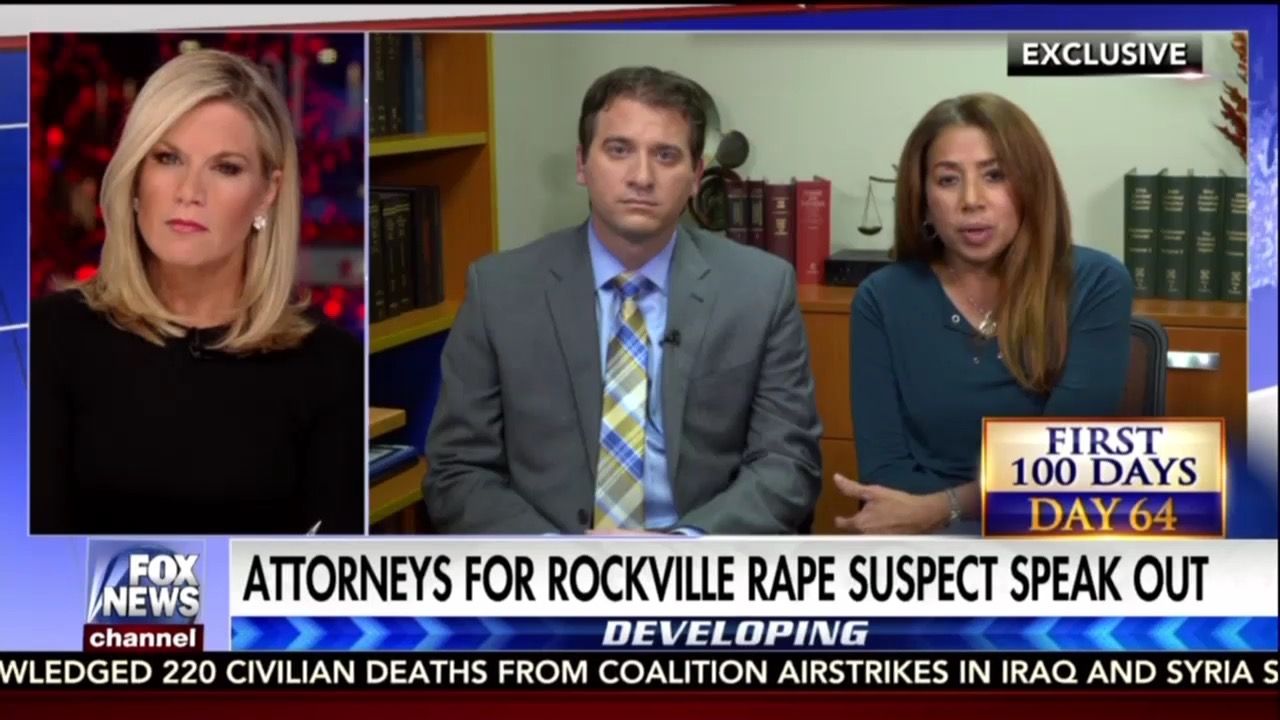 Anchor MacCallum then began her interview with attorney David Wooten and Maria Mena, who runs the law agency where Wooten works, by asking Wooten what basis he had for claiming his client’s innocence. He responded by attacking Donald Trump and the media for sensationalizing the case and unfairly attacking his client.

Wooten blasted the “out of control” “sensationalism,” “outrage,” and “hysteria” that’s been happening over the rape. He continued:

“The reason for that, I believe, that is because of the disgusting vitriol that’s been spewed by Donald Trump ever since the beginning of his campaign,” Wooten ranted, before being interrupted by MacCallum.

“I have no idea what Donald Trump has to do with this,” she said quickly. Getting back to the point, MacCallum asked again directly what reason the attorneys had for believing their clients were innocent, despite statements from local authorities confirming this was violent, forcible assault.

Wooten shifted back to immigration again, complaining that the two men’s immigration status was irrelevant to the case. MacCallum responded that it was a “fact” that they were here illegally so it was a “part of the case” that you couldn’t ignore.

Mena then complained to MacCallum that her defendant and the school board were getting anti-immigrant “death threats” because of the media attention. She proceeded to try to blame the outrage as partisan, motivated by Trump’s immigration policies:

“This is highlighted because of immigration,” Mena pressed. “That’s why this case has received such national attention,” she added.

MacCallum pushed back that the outrage was natural, for several reasons, not the least of which had to do with the pair’s status as illegal aliens.

Ignoring most of what she said, Wooten answered again that his point was that this was “all about immigration.” “We wouldn’t even be on this show right now if it wasn’t for the fact that this has become a conversation about immigration,” he added.