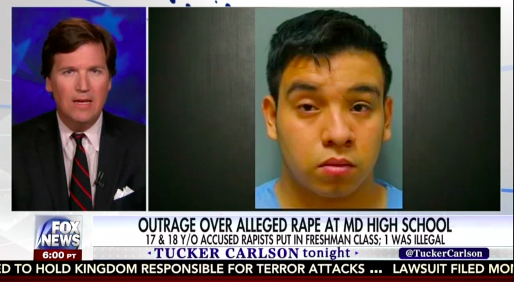 Last Thursday, a young girl attending Rockville High School in Maryland was brutally gang raped in her school’s bathroom by two fellow students, at least one of which was in the country illegally. Jose O. Montano, 17, from El Salvador, and Henry E. Sanchez-Milian, 18, from Guatemala, were charged last week with raping their 14-year-old female classmate in the school’s men’s bathroom. Both had only been in Montgomery County for a few months before they were placed in the school’s 9th grade class. Sanchez-Milian is a confirmed illegal immigrant that is being detained by ICE officials while officials will not comment on Montano’s immigration status, as he is a minor.

Fox News’s Bret Baier was the first reporter to tell the story on national television on his show Monday. Tuesday, a local Fox News reporter asked White House Press Secretary Sean Spicer about what Trump would be doing to curtail these kinds of crimes. Despite the room being packed with reporters from every national news network, ABC, NBC and CBS refused to report the story yet again Tuesday night or Wednesday morning.

While even Univision reported on the story last night, the CNN and MSNBC followed the network’s lead and also ignored the story.

To make matters worse, as the video shows, the liberal school officials have downplayed the story and dismissed the fact that Democrat immigration policies allowed this to happen. Maybe that’s why ABC, CBS, NBC, CNN and MSNBC, don’t want to report it; it makes their side look bad.

In fact, the only mention NewsBusters could find of this story on any of these networks were brief reports on the 4 am CNN and CBS early morning shows.

So what deserved more attention than the brutal rape of a 14-year-old girl, in her own high school by two men, at least one of which, shouldn’t have been allowed into this country?

Over on NBC’s Today they spent three minutes demonstrating a futuristic car that could be elevated on stilts.

Though CBS This Morning didn’t cover this story, they didn’t cover many fluffy stories either. Just over 30 seconds was spent on last night’s Wheel of Fortune flub.