Friday morning, Chelsea Clinton called out Kellyanne Conway for allegedly “making up” a fake terrorist attack. While Conway has explained that she “misspoke,” Chelsea apparently forgot that her own mother repeatedly claimed that she was the victim of an attack that never actually happened.

This all started when Conway told MSNBC’s Chris Matthew that the media was ignoring the “Bowling Green massacre.” She explained afterwards that she meant to say “Bowling Green terrorists” (because the suspects were caught before they actually enacted their terrorist plot.) Regardless, the media went in a frenzy mocking Conway for “fabricating” an attack, and Hillary Clinton’s daughter Chelsea joined in on the witch hunt:

Very grateful no one seriously hurt in the Louvre attack ...or the (completely fake) Bowling Green Massacre. Please don't make up attacks.

The problem is, Chelsea has no room to talk because her own mother fabricated an attack against her that proved to be false. Not only that, but Chelsea was with her mother at the time of the supposed attack. 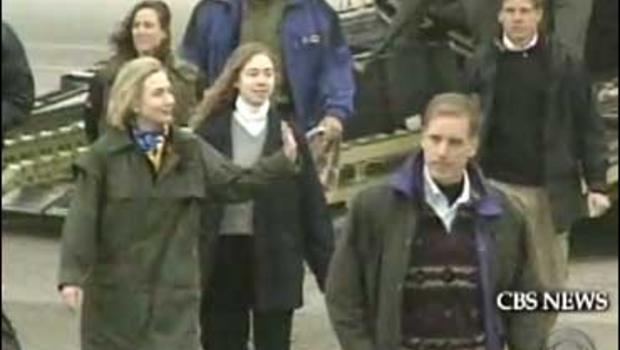 In 2008, during a campaign stop, Hillary Clinton claimed that she was “under sniper fire” back in 1996 when she landed in war-torn Bosnia while she was First Lady.

HILLARY CLINTON: [I] certainly do remember that trip to Bosnia, and as Togo said, there was a saying around the White House that if a place was too small, too poor, or too dangerous, the president couldn't go, so send the First Lady. That's where we went.

I remember landing under sniper fire. There was supposed to be some kind of a greeting ceremony at the airport, but instead we just ran with our heads down to get into the vehicles to get to our base. But it was a moment of great pride for me to visit our troops….

However, original news stories, pictures and video, revealed that she was in no such danger, even showing Hillary with Chelsea walking normally and smiling. Here at Newsbusters, our Senior Editor Rich Noyes originally broke the story calling out Clinton for this falsehood citing news stories from the Bosnia visit, pictures and video that debunked what Clinton claimed happened.

Eventually the rest of the media got on board, but for some outlets it took years to report the falsehood, and even then it was severely downplayed.

Considering the fact that Chelsea Clinton was actually there in Bosnia during the time of the supposed “sniper fire,” she probably shouldn’t be the one blaming others for "making up" something that was arguably far worse.