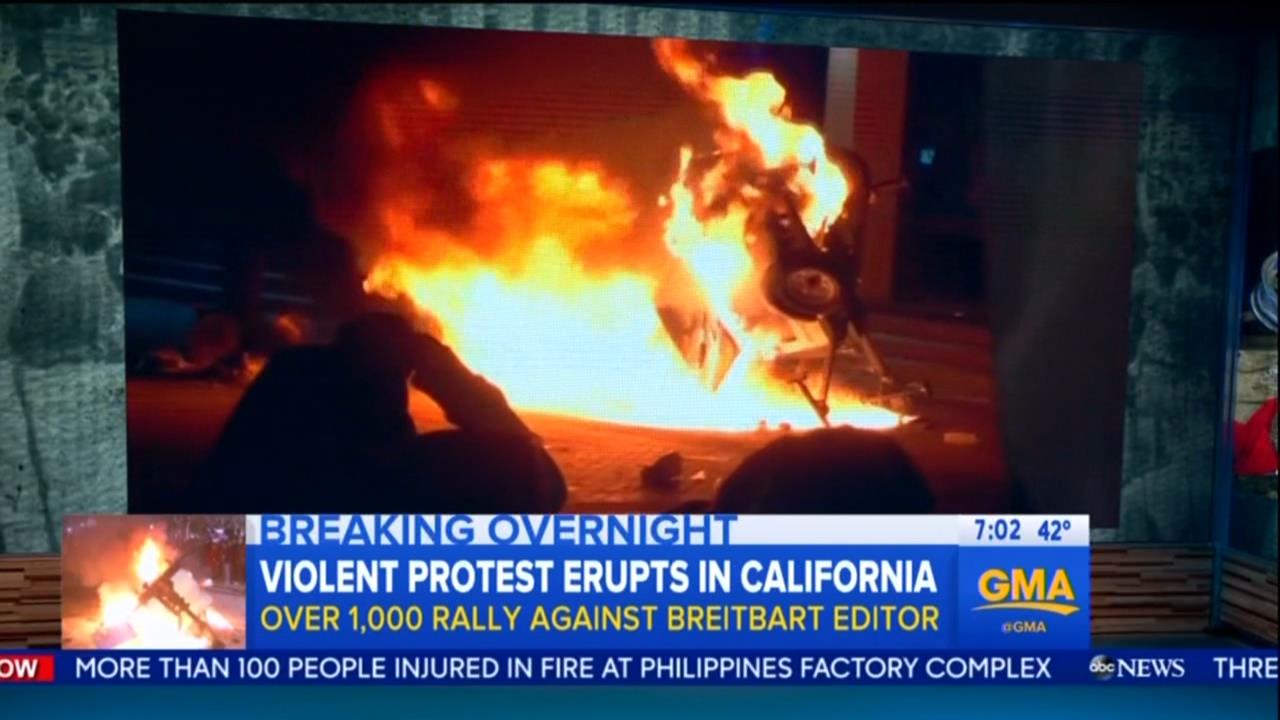 Last night the ultra liberal campus of U.C. Berkeley erupted in violence after an estimated 1,000 students came out to protest Breitbart editor Milo Yiannopoulos, who was invited to speak by the school’s College Republicans. The crowd quickly turned into a mob when they began setting fires, throwing smoke bombs, breaking windows and punching Trump supporters while chanting against Trump and Yiannopoulos. But instead of accurately identifying the crowd as a liberal, left-wing mob, ABC, NBC, and CBS went out of their way to avoid using any harsh labels or political ideology to describe the crowd. All three networks refused to describe the crowd as liberal, saving the “conservative” and “controversial” labels for Yiannopoulos.

Over on NBC’s Today show, anchor Matt Lauer and correspondent Miguel Almaguer repeatedly called the rioters “demonstrators” and “protesters.” NBC also claimed the violence was due to “a small group of masked agitators.” While they themselves refused to use harsher language to describe the crowd, NBC did quote the school’s College Republicans group calling the rioters “thugs and criminals.”

CBS This Morning was similar, with anchor Charlie Rose beginning the report by defending the students as not responsible for the violence, blaming “outside agitators” instead. While not calling the rioters “liberal,” CBS did note that Berkeley was a “famously liberal campus,” and also quoted the College Republicans condemning the riot.

ABC’s Good Morning America began with George Stephanopoulos describing the scene as “more than a thousand people rallying against” Milo’s appearance on campus. Later on, ABC correspondent simply described the violent mob as “people in the crowd” and “protesters.” ABC was the only network to describe them as “rioters” but only did so one time.

Besides the one mention by CBS of Berkeley being a “liberal campus,” no other mention was made of political ideology of the rioters. But that doesn’t mean political labels were absent from the reports. “Conservative” and “right-wing” were both used to describe Yiannopoulos.

ABC referred to him as “right-wing” twice, while NBC’s Almaguer described him as “a leading member of the Alt-Right movement” from the “far right.” NBC’s Hoda Kotb also called Yiannopoulos as the “controversial” editor of “right-leaning” Breitbart News.

On top of that,instead of focusing the criticism on the ones causing violence, all three networks took the opportunity to bash Yiannopoulos instead, calling him out for past controversial statements in an apparent effort to legitimize the violent riot.