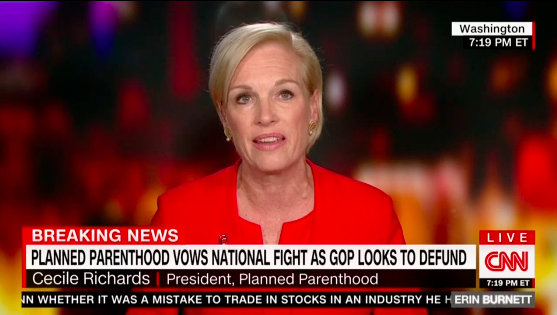 Every time Republicans talk about trying to defund government funding for the largest abortion provider in the country the media freaks out about the GOP’s “war on women.” Thursday night on CNN’s Erin Burnett Outfront, the host brought on Planned Parenthood President Cecile Richards to bash the latest call by Speaker Paul Ryan to defund the organization.

CECILE RICHARDS: We provide abortion surveillances but we provide millions of other services. We think it's important, it's a legal servicewomen need access to in this country. What Speaker Ryan is trying to do here and what vice president, incoming Vice President Pence is trying to do is end access to everything that would prevent unintended pregnancy in this country including family planning services. That's the real irony here. We have seen what's happened in states like Texas where they've ended access to family planning services, to cancer screenings. We just saw in Texas a doubling of a maternal mortality rate for women, particularly low-income women, African-American women who have the least access to care. Ironically, I think what they're trying to do will, if anything, drive up the rate of unintended pregnancy in this country and have exactly the opposite impact of what supposedly they intend.

But there are several problems with what she said. First of all, the “doubling” mortality rate that Richards refers to as a recent event, has actually been occurring since 2011. From 2010 to 2012, reported deaths jumped from 72 to 148 maternal deaths per 100,000 live births. The following two years actually showed a decrease in death rate, (the last available data being from 2014.)

Richards also conveniently leaves out that health problems related to lifestyle such as heart disease, hypertension and drug use are a common factor in these deaths, not access to an abortion-providing clinic.

But worst of all, Richards spins the data to suit her needs. Her organization blamed an anti-abortion law passed in Texas in 2011 as the turning point for the upshift in maternal deaths in that state. But as USA Today reported, the spike in maternal deaths happened at the very beginning of 2011, months before the bill went into effect.

While Burnett did challenge Richards to explain why her organization needed federal funding, she largely set up softballs. After Richards made the above assumption, Burnett didn’t challenge her to explain in any more detail how these two were directly related.