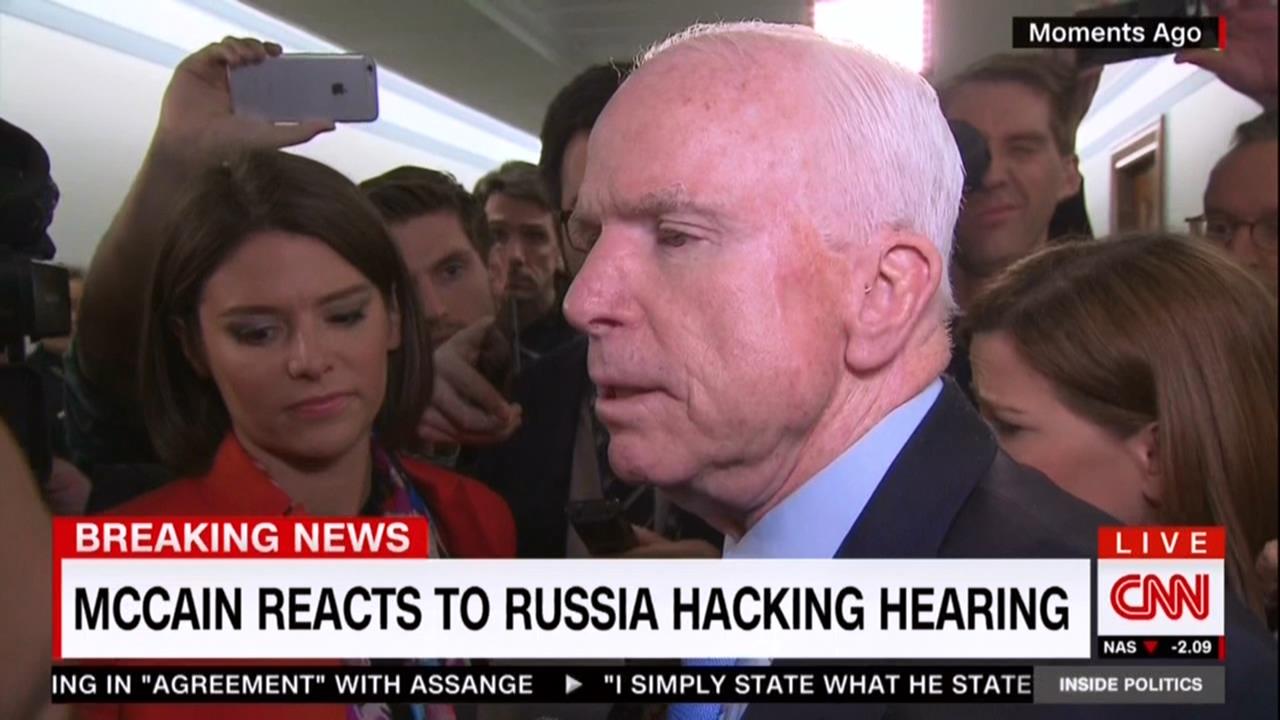 Thursday afternoon on CNN, reporters from several networks surrounded Republican Senator John McCain and attempted to get him to call Donald Trump’s election illegitimate. McCain spoke to the reporters in the hallway immediately following a Senate hearing where Intelligence officials testified about the Russian hacking of the DNC this past Summer. Ever since Clinton lost the election, the media has been desperately trying to pin her loss on Russian influence. While the only thing that has been made evident is that Russia was able to access private DNC e-mails after DNC officials clicked on a phishing e-mail, somehow that means that Russia hacked the U.S. election, at least according to the media.

Immediately following the Senate hearing, reporters from CNN, CNBC, CBS and MSNBC swarmed around McCain and obsessively tried to get the Republican Senator to confirm their bias.

CNN’s Manu Raju was the most persistent of the bunch, though CNBC’s Eamon Javers and MSNBC’s Kasie Hunt also tried to get McCain to say Trump won the election illegitimately. Here’s a partial transcript of the questions asked. (It should be noted that after each question McCain denied the assumption that the hacking affected the election result, but reporters kept asking anyway.)

EAMON JAVERS: Senator McCain -- Is there a moment you suggest the Russian hacking of the election didn't affect the outcome of the election itself. But Director Clapper pushed back and said, we don't know that. Where do you stand on that?

JAVERS : Do you think Donald Trump's election is illegitimate?

JAVERS: Does that raise the prospect that Donald Trump’s election was illegitimate, Sir?

NANCY CORDES: Senator McCain, have you determined why the President-elect doesn't share the same concerns about Russia as many Republicans like yourself on Capitol Hill?

RAJU: Does it worry you, though?

CORDES: His team has suggested this entire incident has become politicized. What's your response to that?

RAJU: You said you don't think the outcome of the election was affected --Do you think that--

RAJU:  Do you think Trump was helped by Russia's hacking?

Towards the end, MSNBC’s Kasie Hunt, who came into the huddle mid-way, asked the same question but in a different way, and finally McCain had enough with the tiresome question:

MSNBC’s KASIE HUNT:  Senator McCain, do you believe that Hillary Clinton's campaign was hurt by what happened with Russia's meddling in the election?

MCCAIN: As I said, I have no evidence. For the fifth time --

HUNT: I apologize. I missed it.

“I have no evidence that the outcome of the election was affected by the hacking,” McCain reiterated again.