After Claiming They Were Always Against Electoral College, New York Times Backtracks 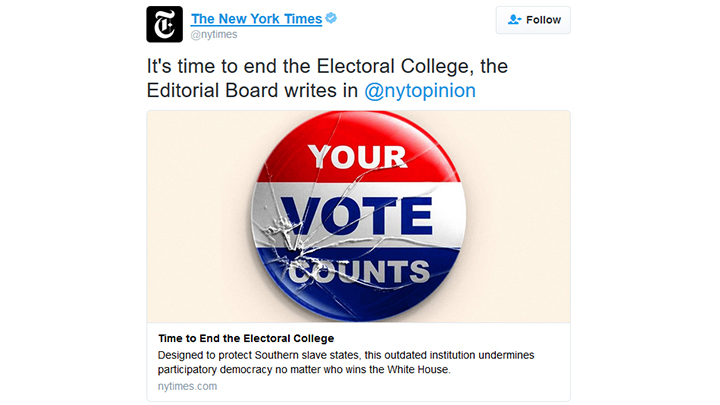 As if the New York Times didn’t already issue enough corrections, they did it again Wednesday. After publishing a long-winded rant in Tuesday’s paper calling for the Electoral College system to be abolished, the editorial board was forced to apologize for making inaccurate claims about the paper’s historical stance on the Electoral College.

The original article entitled, “Time to End the Electoral College,” was just as bad as it sounds. The article was full of false claims, from claiming the electoral college was built on slavery, to claiming that voters in California and New York get less representation than voters in Texas and Idaho. On top of that, apparently, the paper can’t even get their own history right. Towards the end of the rant, the board made this statement:

This page has opposed the Electoral College for at least 80 years, and it has regardless of the outcome of any given election. (In 2004, President George W. Bush won the popular vote by more than three million, but he could have lost the Electoral College with a switch of fewer than 60,000 votes in Ohio.)

But the paper took that claim back just one day later, issuing this embarrassing correction:

An earlier version of this editorial incorrectly stated that the editorial board has been opposed to the Electoral College going back 80 years. It failed to note an exception: in 2000, the board defended the college after the election of George W. Bush.