'No One Is Questioning the Victory!' Stephanopoulos Blows Up at Conway on GMA 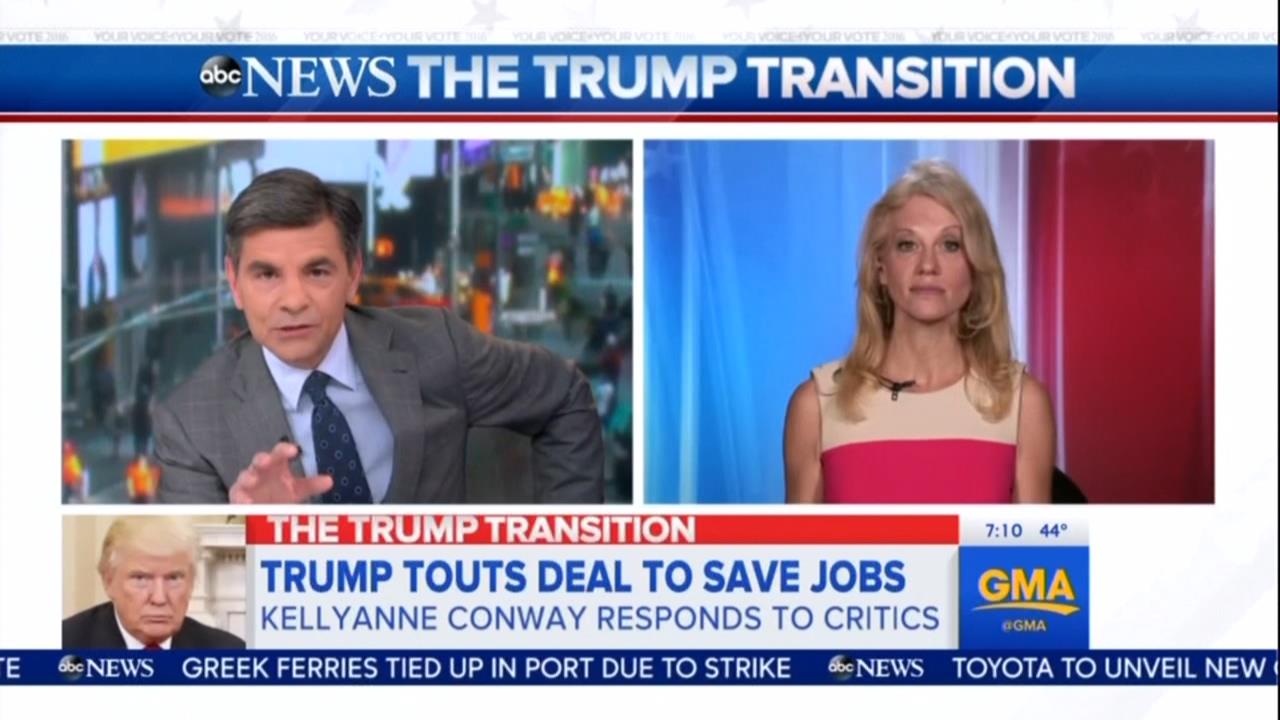 Friday’s Good Morning America quickly got heated during a hostile interview with anchor George Stephanopoulos and Trump’s Senior Advisor Kellyanne Conway. Right from the start, Stephanopoulos parroted the same argument Clinton’s team has been using, that Trump needed to heal the divide in America because he lost the popular vote. Stephanopoulos bristled after Conway noted that the media is only questioning Trump’s camp about the election results, instead of Clinton’s, after hyping the importance of the electoral college pre-election. “No one is questioning the victory,” the ABC anchor complained to Conway, trying to change the topic when Conway brought up the recount effort led by the left.

The interview began with ABC playing a clip of Trump and Clinton aides arguing with each other last night in a leaked audiotape. In the tape, Clinton aides argue with Conway that they should’ve won the election since they had more of the popular vote. Stephanopoulos took off from there, using the Clinton’s camp same argument to ask Conway the following question:

Conway responded that Trump was reaching out to people in “many different ways” and keeping on his promise from election night to be “president of all Americans” before noting that Clinton and Obama had previously harped on Trump to accept the election results but once Clinton lost, they can’t accept the results themselves. Stephanopoulos then shifted gears and demanded Conway answer for making a “false statement” about millions of illegal aliens voting in the election:

STEPHANOPOULOS: We also heard a lot from President Trump this week on Twitter. He sent out the tweet saying he would have won the popular vote if millions of illegal voters had not voted. That claim is groundless. Isn't it irresponsible for a president-elect to make false statements like that?

Instead of directly addressing the tweet, Conway asked Stephanopoulos why the media was harping on this “fake news” about the popular vote now, when the networks only cared about the electoral college before the election.

CONWAY: I think it's groundless for -- talk about fake news. The fake news is that somehow the popular vote is more important than the electoral college vote now. I watched ABC and other networks religiously, George. All I saw was road to 270. I never heard road to popular vote.

Stephanopoulos bristled at being called out for doing exactly that, shooting back, “Kellyanne, that’s not what I asked. No one is questioning -- no one is questioning the victory.” He again repeated his question about illegal voting before Conway doubled-down, calling him out for his own “false statement.”

CONWAY: Well, first many people are questioning the victory. You got people spending millions of dollars wasting money and time in the Clinton and Stein camps in Wisconsin, Michigan, they tried in Pennsylvania to recount. Not everybody has, quote, accepted the election results but to your question, the president-elect has been talking to different people including Kris Kobach of Kansas about voting irregularities or the number of illegal votes that may have been cast and I believe that he bases his information on that.

Stephanopoulos wouldn’t let up though, asking again about the tweet. But Conway again brought up the Democrats own voting results “controversy” that the media has been largely ignoring:

STEPHANOPOULOS: There is no evidence that there were millions of illegal votes. Zero.

CONWAY: There's also no evidence that a recount is going to change the results in Wisconsin, Michigan and Pennsylvania, but we, the victors, continue to be -- we're the only people asked about the election results and about who voted and who didn't vote but this whole discussion about the popular vote is -- it's, frankly, you are know, it's frankly an outshoot by those who can't accept the election results as to why the election results where the people have spoken and given Donald Trump well over 270 electoral vote, 306 including states like Michigan, Wisconsin and Pennsylvania that Republicans have not won in decades, they're just trying to -- they're trying to deny him his rightful victory and I think those who won't accept the election results and are engineering this million dollar waste of money, millions of dollars waste of money in these states recounting the vote George really should be asked the question, why can't you allow this president-elect to form his government the way President Obama and secretary Clinton have suggested they would like to do.

Conway also appeared on CBS This Morning where she received the same biased questioning from anchor Gayle King. Just like on ABC, CBS literally used Clinton camp rhetoric to grill Conway. King actually asked Conway, “We heard you were accused last night of giving a platform to white supremacist. Do you think that perception still exists and is the campaign concerned about that?”