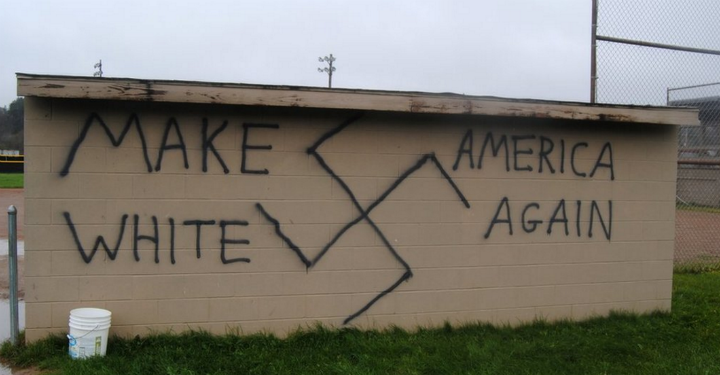 Every year, the media promotes an annual study put out by the The Southern Poverty Law Center, a left wing organization devoted to “monitoring” hate groups and crimes across the U.S, despite provoking it’s own hate crime against a conservative organization in 2012. The group has a cozy relationship with the media, with its president Richard Cohen frequently appearing on news programs to promote his group’s “studies.” Though the group in no way actually vets or verifies any of the alleged incidents they collect for their reports, the media happily hypes the group’s studies without hesitation or question as to their legitimacy. The latest example of this is their new post-election anti-Trump study, “Ten Days After,” which alleges there have been a whopping 867 “hate incidents”in the wake of Trump’s election (Of course, all but 23 of these were allegedly perpetrated by racist Trump voters.) Now, the media, from the Washington Post to BBC News, to USA Today  is rushing to promote the ludicrous study as hard science, despite the fact that many of these alleged incidents are being debunked daily.

Leading the way in irresponsible reporting was the Washington Post’s Moriah Balingit, who dutifully shared the alarming study from the “civil rights group.” Balingit detailed some of the stories from the report and made the direct link to Trump:

The Southern Poverty Law Center documented 867 "hate incidents" in the 10 days after Donald Trump was elected president, more than 300 of which included direct references to the president-elect or his campaign rhetoric...Because the center only began tracking incidents after the election, it is impossible to determine whether Trump's candidacy and election coincided with a rise in incidents. But Richard Cohen, president of the Southern Poverty Law Center, said many of those who reported being harassed or targeted said they were shocked because they had never experienced anything like it, leading him and others to conclude that the divisive campaign has emboldened harassers.

"We're seeing something new in its intensity and ferocity," Cohen said.

In releasing the new report Tuesday - "Ten Days After" - the center and other civil rights organizations assailed Trump, accusing him of inspiring acts of violence and harassment and of being too tepid in his condemnation of those behind them. They cited what they think is a rise in acts of hate primarily targeting women, minorities and immigrants. 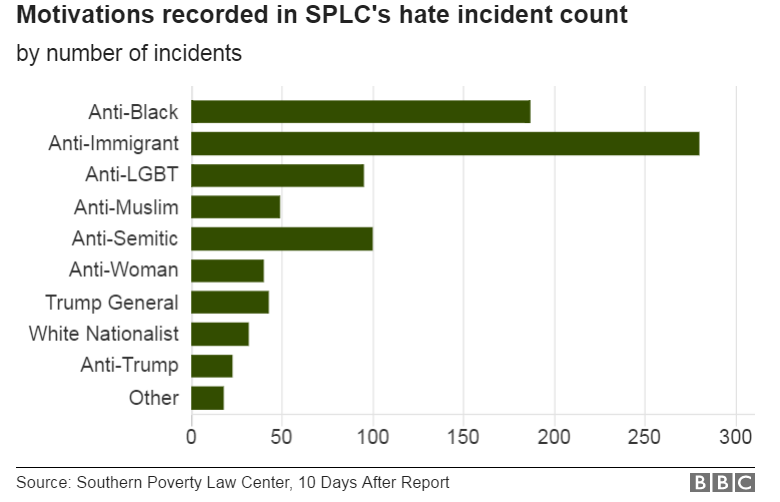 Interestingly enough, buried in the Post report is the fact that these hate crimes were compiled through “a form on the center’s website,” which you can see in it’s simplicity here. It’s hard to see how any of these stories could be vetted through this method.

But the Washington Post was not the only one to promote the study. BBC News also picked it up, as well as the Huffington Post.

USA Today also reported with no speculation as to the study’s legitimacy, claiming a rise in hate crimes were “not in anyone’s imagination” and the rise was “even worse” than what took place after 9/11:

What may seem like a dramatic rise in the number of hate harassment and hate incidents happening across the country in the wake of Tuesday's general election is not in anyone's imagination, experts say.There indeed has been a spike in the number of reports of such incidents, say representatives for two organizations that track such occurrences.

"The white supremacists out there are celebrating his victory and many are feeling their oats," Cohen said.

While the media eagerly promotes this agenda-driven study, reality tells another story. A number of these incidents have been debunked already, though the scant details on the majority of stories would be near impossible to disprove (or prove!).

Take for example this black Bowling Green State University student in Ohio who claimed she was harassed by three white men wearing Trump shirts. After posting the story to Facebook, where it got a lot of attention, law enforcement looked into her story and found out she was lying. After changing her story “multiple times,” officials were able to prove she wasn’t even in the location she said the incident occurred and debunked her story.

In another case, a Massachusetts man claimed that two white men made a racial slur towards him, a reference to lynching and threatened this was “Trump country now.” The man later admitted to making up the whole story to “raise awareness about things that are going on around the country.” One questions how one can “raise awareness” about incidents that aren’t actually happening.

In yet another recent case, a bi-sexual student claimed she received anti-gay, pro-Trump e-mails after the election but again, she turned out to be a fraud who had made up the whole story.

And these are just a few of the hoaxes.

With all the frenzy in the media over “fact-checking,” one wonders how much fact-checking the Post and the rest did with the SPLC’s stories. The obvious lack in verifying stories has become so obvious, that one conservative blogger actually made up a hate crime to test a liberal journalist’s vetting process. The Mic.com writer tweeted out his fake story without question.

The media promoting fake hate crimes is nothing new. Here are Newsbusters we have documented several hoaxes the media reported on as true, and our sister-site MRCTV has debunked some of the more recent pro-Trump hate crimes as well.

Not everyone in the media is completely swayed by this study, however. Maureen Sullivan at Forbes wrote a piece November 29 that called into question the alleged rise in hate crimes from Trump supporters. Sullivan ended her article with a detailed list of debunked high profile hate crimes from the past few years and another list of actual anti-Trump hate crimes.