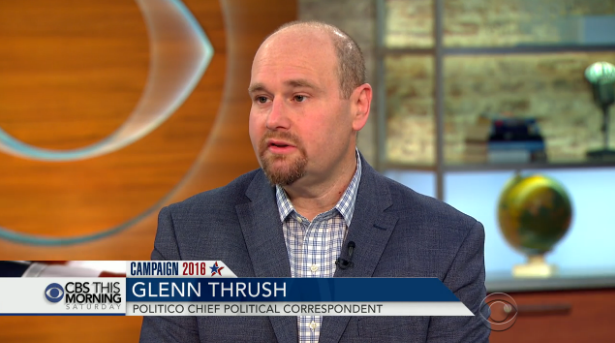 In a leaked e-mail from Wikileaks late last week, Politico’s chief political correspondent Glenn Thrush was caught groveling before Hillary Clinton chairman John Podesta, trying to gain his “approval” before publishing a story on the Clinton campaign. In the e-mail, Thrush admits he’s a “hack” that needs Podesta’s approval on the part of the story that pertains to him. The short e-mail’s subject line reads: “Sorry to bother” which is followed by:

“No worries. Because I have become a hack I will send u the whole section that pertains to u. Please don’t share or tell anyone I did this. Tell me if I fucked up anything.”

Podesta responds, “OTR (on the record): No problems here.”

While not getting much pushback for the “hack” admission, Politico’s Ken Vogel defended Thrush’s hackery as just plain “fact-checking:”

Fact checking a complicated story by running it by a source≠seeking approval or offering a chance to edit, let alone veto. cc: @GlennThrush

The easy rebuttal to this, is if it was just fact-checking, why go to the Clinton’s people instead of going to a neutral source? And why didn’t he do the same with Trump’s spokespeople?

When asked by the Daily Caller, Politico spokesman Brad DaySpring couldn’t cite a single example where Thrush had given this same deferential treatment to the Trump campaign, before writing a story.

Thrush has vehemently defended his journalistic integrity on Twitter, but he has defended Clinton in the past as well.  Just a few months ago he remarked that Clinton didn’t need live fact-checking like Trump did. In 2014 he wrote that Hillary’s biggest obstacle was “the media” and echoed that sentiment again in June of 2016 in an interview with the NYT’s Jill Abramson.