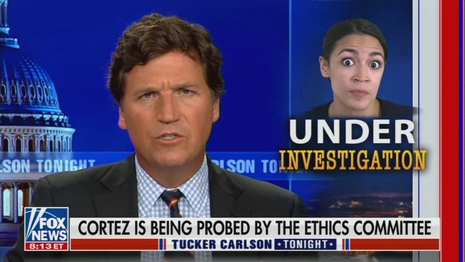 Instead of covering this news out of the House Committee on Ethics, the networks thought local weather reports (ABC), an FDA warning on Lasik surgery (CBS), and another update on the upcoming Netflix special on Prince Harry and Meghan Markle (NBC) were all more important stories worthy of viewers' time.

"Pursuant to House Rule XI, clause 3(b)(8)(A), and Committee Rules 17A(b)(1)(A), 17A(c)(1), and 17A(j), the Acting Chairwoman and Acting Ranking Member of the Committee on Ethics have jointly decided to extend the matter regarding Representative Alexandria Ocasio-Cortez, which was transmitted to the Committee by the Office of Congressional Ethics on June 23, 2022," the committee said in a press release regarding the investigation.

"The Committee notes that the mere fact of a referral or an extension, and the mandatory disclosure of such an extension and the name of the subject of the matter, does not itself indicate that any violation has occurred, or reflect any judgment on behalf of the Committee," the committee added.

The release ended by noting that they will announce their next "course of action in this matter following its organizational meeting and adoption of Committee Rules in the 118th Congress."

The committee did not specify what Ocasio-Cortez did to warrant being under investigation.

What we do know is that if Ocasio-Cortez was a Republican, the leftist news networks wouldn't sit on this news, they would've each run a story on it.

This bias by omission from the three networks was made possible by Fidelity on ABC, Liberty Mutual on CBS, and Salonpas on NBC. Their information is linked.