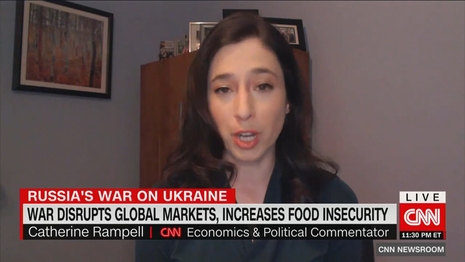 Published late Monday evening, the piece titled “Democrats are missing the bigger immigration issue” starts off by acknowledging “Democrats are terrified that a coming border surge might tank their midterm chances.” But then Rampell reassures her leftwing readers that the problem in the United States isn’t that there will be “too many immigrants” but rather “we’ll admit too few.”

Rampell argues that admitting more immigrants “who can fill critical labor-market shortages” we will lessen the strain on supply chains and therefore cool inflation:

The United States is experiencing inflationary levels not seen in four decades. Americans are unhappy, and they are more than five times as likely to cite “inflation,” “cost of living” or the economy in general than immigration as the nation’s biggest problem. These economic concerns are, however, rooted at least partly in immigration policy.

To argue that supply chain hiccups are the only reason why inflation is at a forty-year high is of course ridiculous. Even Barack Obama’s former National Economic Council Director Larry Summers admitted the cause of inflation was the trillions of dollars in government spending that was pumped into the economy.

Despite that, she still argues in her piece “there remains huge demand among foreign-born workers to contribute to the U.S. economy.” The ultimate effect of this is “the many businesses that rely on these workers are losing critical staff, making inflation worse.”

Rampell ends her absurd op-ed suggesting that we should avert our eyes to the coming flood of immigrants rushing across the border and realize that they will only help our pocketbooks, “and, by extension, Democrats’ political fortunes.”