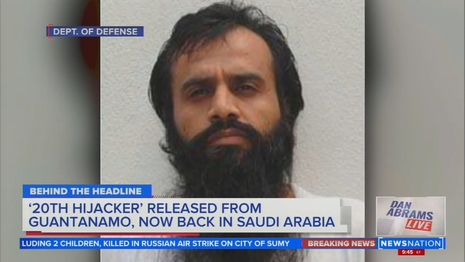 While those are all important stories in the local communities where they took place, they aren’t as big of a story as the release of a terrorist who would’ve taken part in the terrorist attacks that killed nearly three thousand Americans if he wasn’t denied entry into the United States in August 2001.

Al-Qahtani is referred to as the 20th hijacker who was widely expected to be aboard United Flight 93 since that flight had four hijackers instead of five like the other hijacked planes that day.

Despite his apparent desire to come to the United States and kill thousands of innocent Americans, the Biden Defense Department decided in February that he was no longer a threat, and would be released from Guantanamo Bay and sent back to his home country of Saudi Arabia, according to a press release.

“On June 9, 2021, the Periodic Review Board process determined that law of war detention of Mohammad Mani Ahmad al-Qahtani was no longer necessary to protect against a continuing significant threat to the national security of the United States. Therefore, the PRB recommended that al-Qahtani be repatriated to his native country of Saudi Arabia, subject to security and humane treatment assurances” the Defense Department statement says.

This is the latest move in the Biden administration’s plan to close the Guantanamo Bay Detention Camp according to The Daily Caller.

This latest example of bias by omission from the three networks was made possible by Prevagen on ABC and Simplisafe on CBS and United Healthcare on NBC. Their information is linked so you can let them know about the biased news they fund.