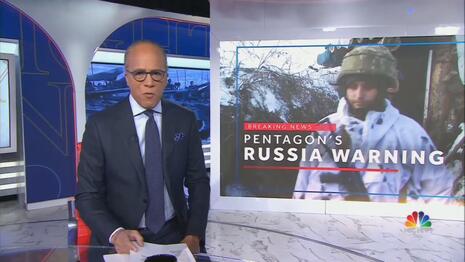 With the conflict between Russia and Ukraine continuing to escalate, President Joe Biden had a phone conversation with Ukrainian President Volodymyr Zelensky in which he was told by the Ukrainian leader to dial back the rhetoric of the possibility of an imminent invasion as not to trigger panic among Ukrainian citizens. As expected, ABC World News Tonight and NBC Nightly News ignored this revelation today during their coverage.

While all three evening news broadcasts covered the news of the phone conversation between the two leaders, only CBS Evening News covered the request from Zelensky for Biden to cool his rhetoric. Norah O'Donnell led off her coverage of the deteriorating situation in Ukraine by reporting "that in the last 24 hours, there’s been an increased Russian buildup of troops on the Ukraine border."

O'Donnell then went to CBS correspondent Holly Williams for her report on the conflict along the Ukraine/Russian border as well as an update on the Biden/Zelensky conversation. O'Donnell asked Williams "what are we learning about President Biden's call with Ukraine's President today?" Williams then reported that "a source tells CBS News tonight Ukraine's President Volodymyr Zelensky asked the U.S. to dial back its rhetoric on an imminent invasion because he does not want panic here in Ukraine."

Meanwhile over on NBC Nightly News, chief foreign correspondent Richard Engel reported on the Biden/Zelensky phone call but there was noticeably no mention of Zelensky telling Biden to knock it off:

ABC's World News Tonight was guilty of the same offense as NBC with senior foreign correspondent Ian Pannell mentioning the call but failing to mention the embarrassing request of Biden:

President Biden speaking to President Zelensky of Ukraine tonight, reaffirming America's support, willingness to respond to decisively if Russia invades Ukraine. Although we do know the two Presidents have very different views on how likely that is and I have to say, tonight, after a long few weeks of diplomacy, there's no sign this crisis is easing.

This latest example of bias by omission by ABC and NBC News was made possible by Prevagen on ABC, and Nissan on NBC. Their contact information is linked so you can let them know about the biased news they fund.

NORAH O’DONNELL: And we learned today that in the last 24 hours, there’s been an increased Russian buildup of troops on the Ukraine border. Also, the U.S. Military naming the ten U.S. Bases where some 8500 troops are on heightened alert to deploy to Eastern Europe. CBS's Holly Williams reports from Ukraine's capital of Kyiv.

HOLLY WILLIAMS: The US says the ball is now in Russia's court and today Moscow continued its buildup near Ukraine's northern border in Belarus for what it says are military drills. Russia's demanding security guarantees including the rolling back of NATO forces from eastern Europe and a ban on Ukraine joining the alliance. The U.S. and its NATO. allies say they cannot agree to either. The American ambassador to Russia hand-delivered a written response yesterday. Today the Kremlin said the U.S. had not addressed its main concerns and likened the current situation to the Cold War. Ukraine has lived with Russian aggression for years, these essential service employees are getting military training, and these school children in the capital Kyiv are learning about bomb threats. At St. Michael's golden-domed monastery the faithful have been worshiping for over 900 years. At this early morning service, some Ukrainians told us they were praying for peace. I hope God talks some sense into Russia said this woman, and this 60-year-old man told us he’ll willingly take up arms to defend his country.

O’DONNELL: And Holly Williams joins us now from Kyiv. So Holly, what are we learning about President Biden's call with Ukraine's President today?

WILLIAMS: Well, Norah, a source tells CBS News tonight Ukraine's President Volodymyr Zelensky asked the U.S. to dial back its rhetoric on an imminent invasion because he does not want panic here in Ukraine.

LESTER HOLT: New concern about the crisis in Ukraine. The Pentagon says Russia has moved more combat forces to the borders in the last 24 hours. Richard Engle is on the front lines tonight with Ukrainian troops.

RICHARD ENGEL: This may be Russia's way of showing it didn't like the United States' written answers to Russia's demand that NATO leave eastern Europe and bar Ukraine. New live-fire drills near Ukraine, more jets into Belarus, and Naval exercises in the Baltic Sea. President Biden called Ukraine's President Zelensky who’s receiving U.S. Weapons, but President Biden has said repeatedly no American troops are heading his way. On the call, President Biden pledged additional economic support. On Ukraine's front line in the east, the troops are remarkably calm. On watch. But many seem to be following their government's line, that there's no great reason for concern. We're in good spirits and we have no problems says Valentine. Ukraine has already been in a low-level war out here in the east for eight years, emptying out so-called front-line ghost villages. There used to be 3,000 people here. We found three women. All Russian speakers, none wants Putin to invade. We live in Ukraine. We don't need Russia, says Tatiana. Yet Russia continues to mass in force upwards of 120,000 troops now and significantly more intelligence officials say coming next week. NATO is trying to show a united front in support of Ukraine, but there are divisions. Germany refuses to send combat weapons, instead is sending 5,000 helmets. The Mayor of Kyiv was outraged, and asked what are they sending next, pillows?

DAVID MUIR: Now to the tensions with Russia over Ukraine. President Biden speaking with Ukrainian president Zelinsky today. The White House, just before we came on the air tonight, saying the President reaffirmed the readiness, in their worlds, of the U.S. and its allies. And after the U.S. delivered a written response to Russia's demands, the U.S. refusing to promise that Ukraine would never join NATO, tonight, Russia's new response. Here's our senior foreign correspondent Ian Pannell from Ukraine again tonight.

IAN PANNELL: Tonight, Russia making a show of its military might. Releasing more videos of drills by its armed forces. These naval light fire exercises being conducted in the Baltic Sea. And not far from the eastern Ukrainian border, army exercises involving tanks and artillery.

JOHN KIRBY: We continue to see the accumulation of combat power.

PANNELL: America's written response to Moscow's security demands now in the hands of Vladimir Putin. But the U.S. Rejecting Putin’s demand that Ukraine be blocked from joining NATO. Today, Foreign Minister Sergey Lavrov saying there is no positive reaction on the main issue in this document, but said there are grounds on other issues to keep on talking. Russia saying President Putin's response will be swift, but the Kremlin insisting these are just exercises. And it has no plans to cross the border. U.S. Diplomats fear they could attack at any time. If there is a conflict, this is where it could begin. In the east of the country. General Pavlov  commands 50,000 troops here and believes they're ready to stand and fight. Putin says he doesn't plan to invade. The general says it's a lie, that Putin has had plans to seize Ukraine by force for years. David, President Biden speaking to President Zelensky of Ukraine tonight, reaffirming America's support, willingness to respond to decisively if Russia invades Ukraine. Although we do know the two Presidents have very different views on how likely that is and I have to say, tonight, after a long few weeks of diplomacy, there's no sign this crisis is easing. David?