Keith Olbermann doubled down on his ridiculous accusations of treason against the Trump family with a tweet Monday morning. In response to President Trump’s tweet that most politicians would’ve gone to the meeting his son attended Olbermann replied, “Sure! Benedict Arnold would have. And Aaron Burr. And Charles Lindbergh. And Quisling. And Marshal Petain. That's politics! Annnnnd treason!” The initial charges of treason were idiotic enough, but now Donald Trump Jr. equates to the greatest traitor in American history? 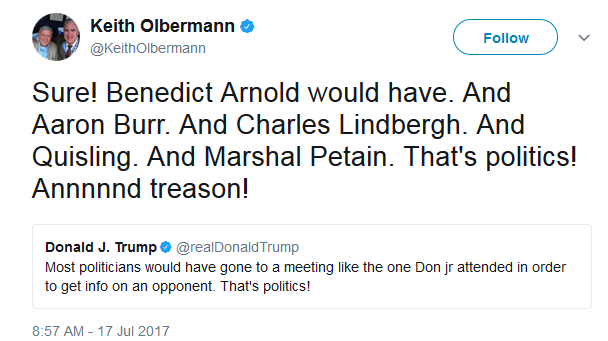 Prominent lawyer Alan Dershowitz pointed out the sheer idiocy of such charges during an exchange with Fox’s Jeanine Pirro on Sunday. He explained, “When we wrote our constitution the British were using treason very broadly against their kings. So the framers of our constitution wrote the most specific provision of treason ever put into a constitution. Treason shall consist only of waging war against the United States."

JEANINE PIRRO: Let's talk about treason. How can they even use the word treason? I mean, you've got Nancy Pelosi and the rest of them. Nancy Pelosi, I believe, has said after these latest revelations it's clear we've suffered a desecration of our democracy and collusion has been proven. By the way, what is collusion?

ALAN DERSHOWITZ: Collusion is not a crime unless it's committing a criminal act. But the treason thing really upsets me because it so flies in the face of history. When we wrote our constitution the British were using treason very broadly against their kings. So the framers of our constitution wrote the most specific provision of treason ever put into a constitution. Treason shall consist only of waging war against the United States. Coming armed against the United States. It's inconceivable that anybody who has any knowledge of the constitution or American history would argue that a private citizen by securing information for a campaign from somebody who may be a surrogate of the government has created treason. It's just so ahistorical and so contrary to what the law is that we ought to stop talking about it.

We are miseducating American people. We're miseducating young people. People come over to me and say is it really treason and I tell them go back and read the constitution. Look, the good thing is young people really are looking at the constitution these days. A kid came over to me recently and asked me about the emoluments clause. She had thought emoluments were a kind facial cream and now we talk about emoluments. Now, we're talking about treason. So we are going to learn a lesson. But it's so dangerous to democracy to throw around these criminal law terms and accuse people willy-nilly.

With this information in mind, it becomes all the more apparent as to how bad Benedict Arnold’s actions were to constitute the charge of treason. This was not a label that the founders tossed around carelessly. The fact that Olbermann does so simply indicates the degree to which the media have been infected with anti-Trump hysteria and how disassociated from reality they have become.