Liberals in general tend to heap scorn on corporations and their supposedly outsized influence in public policy and liberal media outlets like the Daily Beast have particularly been keen on hounding the NFL in the past few years for everything from its tax-exempt status (given up recently after years of criticism) to its handling of concussive injury in its players to its handling of allegations of physical and sexual violence by star players.

But now that the League is hard at work trying to kill a religious liberty law in Georgia, well, the NFL has some newfound respect at the Daily Beast. Here's how Patricia Murphy started her March 22 story, "NFL Wants to Sack Anti-Gay Bill in Georgia":

Roger Goodell, commissioner of the National Football League, is on the cusp of becoming America’s newest gay icon.

Goodell, who has an openly gay brother, and the NFL have emerged as staunch allies in gay rights advocates’ efforts to defeat HB 757, the controversial religious freedom bill that passed the Georgia legislature late last week.

Murphy went on to lament how the bill, which "began the year as 'the Pastor Protection Act,' has since grown in scope to do more than simply protect clergy who would "refuse to perform same-sex weddings." Alas, Murphy moaned:

...after two trips through the Georgia state House and Senate, the bill now gives faith-based organizations the right to hire and fire people who violate their “sincerely held religious beliefs,” as well as the right to refuse to rent facilities for events they find “objectionable.”

The bill would also make it illegal to force an individual to attend a gay wedding.

With every expansion of the bill, Georgia legislators were warned by local business leaders not to do to Georgia what Indiana legislators did in 2015, when their own Religious Freedom Restoration Act led to an immediate nationwide backlash, including more than 400 million #BoycottIndiana tweets in the week the bill passed.

A year later, local tourism officials estimate the city lost at least 12 conventions and $60 million in direct business as a result.

But rather than rebuke those companies for what arguably amounts to a form of economic extortion, Murphy seems to tacitly approve such moves by corporate America, including the NFL, as a bludgeon against the evils of anti-gay discrimination: 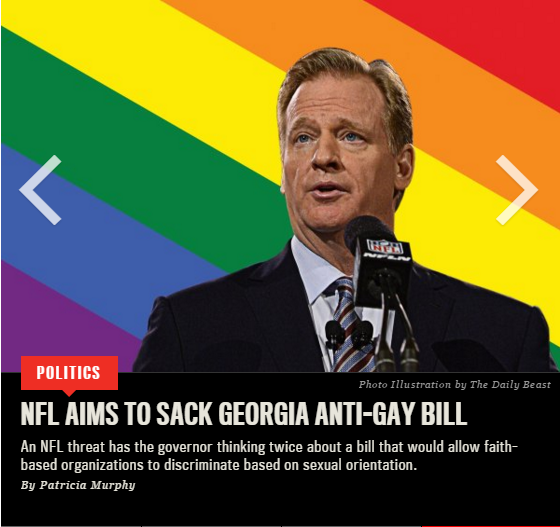 “The Georgia legislature took a bad bill and made it worse.” Lorenz said. “This is a bill that has all kinds of avenues for harm and discrimination for Georgians.”

Along with LGBT advocates, major players in Georgia’s business community have ripped the legislation.
Coca-Cola, Home Depot, and Delta Airlines oppose it. Michael Dell, Richard Branson, and Jack Dorsey have all spoken out against it. SalesForce CEO Mark Benioff, who has 16,000 employees in Georgia, has warned he’ll pull as much of his business as possible out of the state...

Of course, it's highly unlikely that any major corporation would do business in Georgia with small companies owned by religious vendors who might have a policy of not photographing or catering a same-sex wedding. And, indeed, the convention industry typically uses large national chains which tend to have liberal anti-discrimination policies. It's highly unlikely, for example, that the NFL would be "forced" to do business with a hotel chain or a catering service which voluntarily subscribe to their corporate ethics on sexual orientation.

Simply put, the proverbial "little guy" that laws like the Georgia bill will protect are highly unlikely to be the one's doing much, if any, business with these corporations anyway.

All the same, as Murphy tells it, the choice is quite simple for Gov. Deal. Will he serve God – to be more precise, will he serve and protect the rights of his state's religious business owners who wish to honor God in the marketplace – or will he serve Mammon?:

All eyes are now on Gov. Deal, a Southern Baptist who has spent the bulk of his time as governor focusing on improving Georgia’s economy, including by bringing businesses like Porsche North America, industries like film production, and events like the Super Bowl, to Georgia.

Critics say Georgia’s RFRA bill could endanger them all.

“I think he’s probably staying up at night between the Super Bowl and the Hollywood people,” said a longtime Georgia lobbyist with close ties to Deal. “He’s staked a lot of his legacy on economic development. I think that’s going to weigh on him very heavily if these folks say they’re going to pull up stakes.”