"John Kasich Is No Moderate" a teaser headline at MSNBC.com's home page warns over an ominous black-and-white photo of the Ohio governor. Sure "[t]he genial Ohio governor has forged a reputation as a pragmatic centrist who can bring people together," the teaser caption notes, but, "His record and policy positions tell a different story."

Kasich has quietly made it much harder to get an abortion in Ohio, signing bills that bar the procedure after 20 weeks, mandate ultrasounds for women wanting to have an abortion and impose restrictive rules on clinics. “It’s hard to find a governor or anyone who has a better record,” the president of the anti-abortion Susan B. Anthony List has said.

The nerve! Signing a law boosting regulation of surgical abortion clinics to protect women's healty and safety. Don't liberals love regulation of the private sector? Yes, but not when it comes to the abortion industry.

On taxes, Roth grouses, Kasich is "vague, but like that of every other Republican candidate, it amounts to a windfall for the wealthy," Noting that: 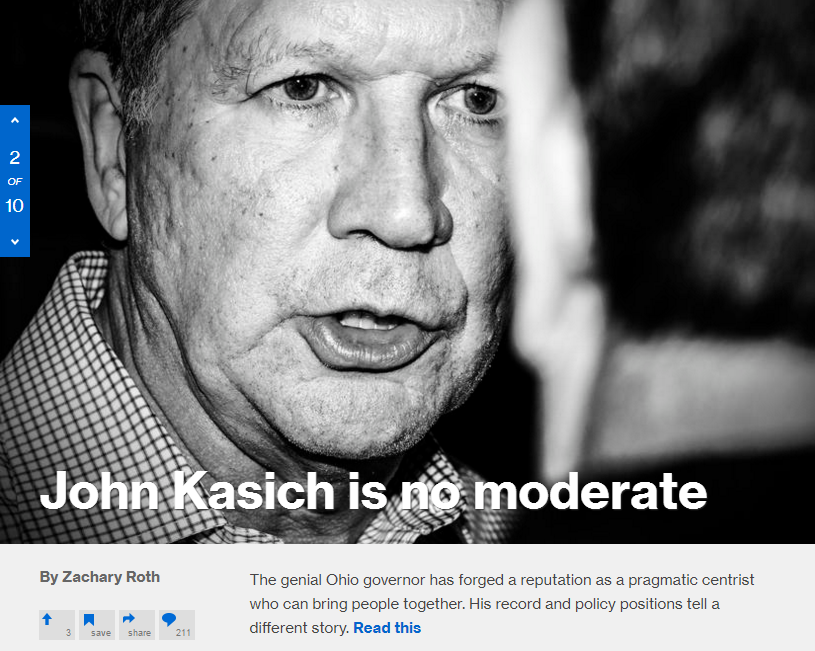 He would cut the top marginal tax rate to 28 percent, reduce the capital gains tax to 15 percent and repeal the estate tax, a long-standing conservative goal. Kasich does want to increase the Earned Income Tax Credit for working people.

“It’s going to be a tax cut for the rich,” Roberton Williams of the nonpartisan Tax Policy Center said. Williams said Kasich hasn’t released enough details to be able to say exactly who would benefit by how much. But, Williams said, the basic outline of the plan makes clear it offers “big tax cuts for the rich, smaller tax cuts for everyone else.” Still, it’s a little less regressive, he said, than the plans offered by Ted Cruz and Donald Trump, which skew even more heavily toward the rich.

Of course, there's no mention that the Tax Policy Center is a liberal think tank which, as a matter of course, derides conservative tax-reduction plans. What's more, describing tax cuts as a "windfall" fundamentally mistakes the government as the proper owner, as it were, of the fruits of the taxpayer's labor.

It is the taxpayer who owns his/her labor and the fruit thereof, and taxation is a necessary evil to fund the necessary functions of government.

Finally, being MSNBC, you know Roth had to whip up fear about Kasich's stand on voting rights:

Kasich has helped make it harder to vote in Ohio, signing bills that significantly cut early voting, restrict the availability of absentee ballots, and reduce the minimum number of voting machines counties must have on hand, potentially causing longer lines at the polls. He did nix a Republican effort to make it harder for students to vote.

Of course, as I've previously noted here at NewsBusters, Ohio STILL has among the longest early-voting periods of the various states of the Union AND any Ohio voter can elect to vote by absentee ballot. What's more, again, as I've noted here at NewsBusters, there are solid-blue liberal states like Connecticut, New York, and Pennsylvania, which completely lack any in-person early voting.