While both Matthews and Richards saw the shocking move by the D.A. in Harris County, Texas, as vindication that Planned Parenthood has done absolutely nothing wrong, the Hardball host complained that "the power of suggestion" is so strong as to leave most Americans convinced the nation's largest abortion clinic chain did.

"How do you get it out of people’s heads and say it was all hogwash?" a concerned Matthews inquired of Richards.

At the conclusion of his softball interview, Matthews thanked Richards for coming on the program and offered that  "sometimes when you win a victory, you forget how much it cost." Of course, the cost of "reproductive rights" in the 43 years after Roe is millions of unborn children being killed in the womb, but that's a cost we doubt pro-choice cradle Catholic Chris was considering.

Another cost that Chris didn't consider was the chilling effect the indictment may have on sting journalism. While Matthews might not like the agenda of the pro-life activists behind the Center for Medical Progress, shouldn't he, as a jouranlist, be concerned with what amounts to trumped-up charges by prosecutors on a pair of independent journalists?

Here's the transcript of the segment and video of some of the bias highlights:

CHRIS MATTHEWS: Welcome back to Hardball. What began as an investigation spurred by undercover videos of Planned Parenthood has now resulted in a Texas grand jury’s indictment of of two anti-abortion activists who were connected with those videos.

David Daleiden and Sandra Merritt each face a felony charge of tampering with a government record. In this case, allegedly fake drivers’ licenses, which carries a punishment of up to 20 years in prison.

Miss Richards, thanks for joining us. This has been a real topsy-turvy case. What was your reaction when you heard that the D.A. was going to go after the people who made the video, not the people the video people were after?

CECILE RICHARDS:  Well, Chris, thanks for having me on. I’ll say it just felt like finally justice will be done. These folks perpetrated this scam, took three years, as you've reported. Used false government IDs. Tried to entrap people. They were totally unsuccessful, but their whole goal was to smear the reputation of Planned Parenthood.

So, I was really glad to see that this Republican district attorney in Houston has now indicted them and what I understand, I just heard that they’re about to turn themselves over to the authorities.

MATTHEWS: The trouble with the power of suggestion is it's very hard to get rid of it once it's in your head. And you remember, there’s a, before your time, your mother's time, there’s a great movie, Anatomy of a Murder. And the D.A. was played by James Stewart said to the jury, “Don't think of a blue cow. Don’t do that.”

And of course, all the jury is thinking of a blue cow, whatever a blue cow looks like. And so this case, everybody in the Republican side especially, and some Democrats had to face with the voters hear this terrible story told by this video. How do you get it out of people’s heads and say it was all hogwash?

RICHARDS: Well, I think what we've done Chris, is if we put our facts first and foremost, and their health care and their well-being, and even, ever since all of this has been going on, and some of the heated rhetoric we've seen in the political season, our doors have stayed open.

I mean, we provide health care to one in five women in America. And every day, thousands of people come through our doors. And I think the main thing we do is continue to provide high quality care, and that's why all of the national polling, even as all these smear attempts were going on, consistently showed support for Planned Parenthood.

MATTHEWS:  Do you have much Republican support among what we used to call, where I grew up the suburbs of Philly, and around the city, a lot of moderate Republicans. You know, they’re still there.  Maybe their voters aren’t – do you have that kind, I would expect you still have pretty good support in those communities around Chicago, around New York, around Philly, those kind of places.

RICHARDS: Absolutely. I mean the irony is, of course, Planned Parenthood was started by Republicans all across the country, including even Arizona, the Goldwater family.

It’s been really discouraging, Chris, to see every single Republican candidate for president take out against not only Planned Parenthood, but against women’s access to all reproductive health care. I don’t think it’s actually in keeping with where most Republicans are. 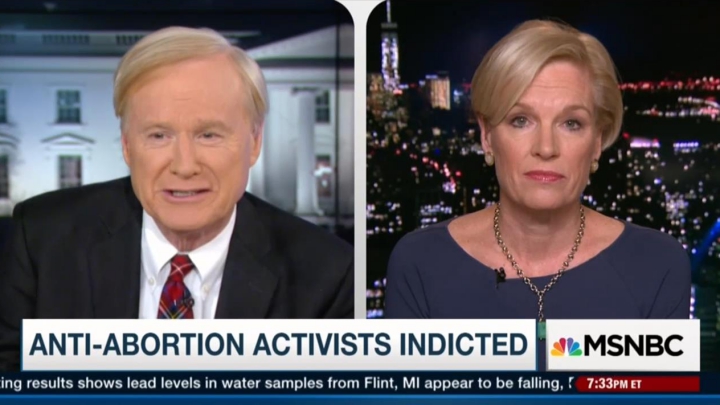 MATTHEWS: Do you think young women – I’m not talking about women who come to you for help or anything, but just generally – think young women appreciate that you exist and that there was a time when you didn’t? And there was the back-alley abortions 30, 40, 50 years ago before Roe v. Wade and there wasn’t an organization like yours – do they get it that this is a better time in terms of their choices in life?

RICHARDS:  I think that's a really good point. What's incredible to me and this actually happened as a result of that five-hour hearing that I sat through in Congress, is that that really exposed young people, young men and women, to what's going on on Capitol Hill by some of the leadership that's going out after Planned Parenthood. And I think it was a real wake up call.

I hear from young people all the time who are saying, “I can't believe that they're trying to end access to basic health care.” And for them, that means, includes, birth control, STD testing and treatment that they get at Planned Parenthood.

I think actually it’s had the opposite effect. I think it’s woken up a lot of young people who probably didn’t know that those rights were at risk.

MATTHEWS:  I hope you're right. I have a feeling that sometimes when you win a victory, you forget how much it cost. Anyway, thank you, Cecile Richards, thank you for coming on. It’s great to have you on, always.