Buttering up his February 12 guest Boris Johnson -- there to plug his new book on Churchill -- Hardball host Chris Matthews told the London mayor that he's eligible to run for president, given that he was born on U.S. soil. But Matthews apparently forgot the residency stipulation in the Constitution, one criterion that Johnson doesn't meet.

"By the way, you're eligible to run for president... you were born here," Matthews noted, interrupting Johnson while he was recalling why his parents gave him a Russian first name.

Johnson , born in 1964 in New York City and has both British and American citizenship. As such, Johnson satisfied two of the three constitutional requirements for presidential eligibility. But, alas, he lacks the third as he has not "been fourteen Years a Resident within the United States (Article II, Section 1, Clause 5)."

Johnson lived for about five years in the States but moved back with his family to the United Kingdom in 1969. Johnson has mostly lived in the UK since, although he did live for a time in Belgium. Assuming the Constitution's 14-year residency requirement is cumulative -- and there's historical precedent for that one -- and not necessarily consecutive, Johnson would have to establish residency in the United States and live here another nine years before being eligible to serve as president.

In addition to brushing up on his civics, Mr. Matthews may wish to take a remedial science class. In an effort to lambaste Wisconsin Gov. Scott Walker (R) as an anti-science nimrod for dodging a question in London about whether he believes in evolution, Matthews asked Johnson for his thoughts on American conservative politicians and why they often dodge the gotcha question and rebuked him for calling evolution a "theory" (emphasis mine): 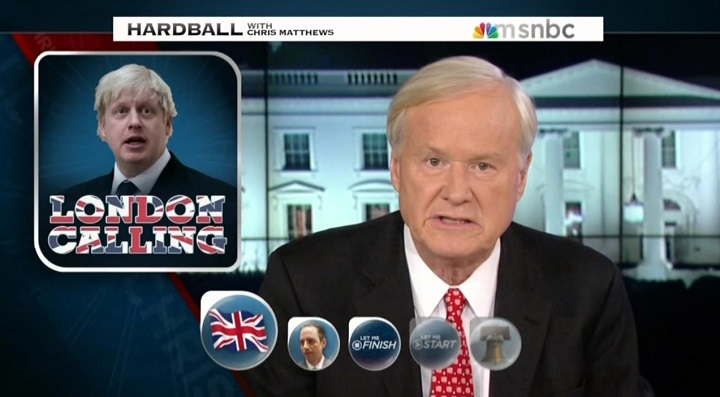 CHRIS MATTHEWS: You're a Tory. You're a Conservative. Why, what do you make of an American who won't just like in that show we just saw -- what is Scott Walker who I thought is a pretty OK guy, why is he afraid of saying I believe in science?.... What's he afraid of?

BORIS JOHNSON: The theory of evolution, as you know was propounded and posited --

Once again, Matthews betrays his scientific ignorance as to what is meant when we talk about a scientific theory. Take it away, LiveScience.com (emphasis mine):

A scientific theory summarizes a hypothesis or group of hypotheses that have been supported with repeated testing. If enough evidence accumulates to support a hypothesis, it moves to the next step—known as a theory—in the scientific method and becomes accepted as a valid explanation of a phenomenon.

When used in non-scientific context, the word “theory” implies that something is unproven or speculative. As used in science, however, a theory is an explanation or model based on observation, experimentation, and reasoning, especially one that has been tested and confirmed as a general principle helping to explain and predict natural phenomena.

Any scientific theory must be based on a careful and rational examination of the facts. In the scientific method, there is a clear distinction between facts, which can be observed and/or measured, and theories, which are scientists’ explanations and interpretations of the facts. Scientists can have various interpretations of the outcomes of experiments and observations, but the facts, which are the cornerstone of the scientific method, do not change.

A theory must include statements that have observational consequences. A good theory, like Newton’s theory of gravity, has unity, which means it consists of a limited number of problem-solving strategies that can be applied to a wide range of scientific circumstances. Another feature of a good theory is that it formed from a number of hypotheses that can be tested independently.

A scientific theory is not the end result of the scientific method; theories can be proven or rejected, just like hypotheses. Theories can be improved or modified as more information is gathered so that the accuracy of the prediction becomes greater over time.

Theories are foundations for furthering scientific knowledge and for putting the information gathered to practical use. Scientists use theories to develop inventions or find a cure for a disease.